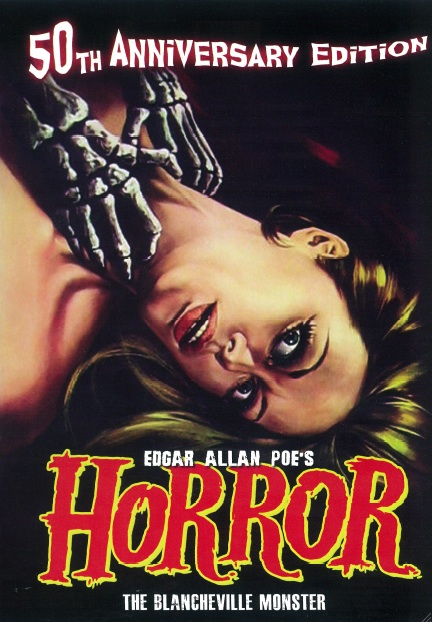 Northern France, 1884, Emily de Blancheville (Ombretta Colli, credited here as Joan Hills) is returning home from school with her best friend Alice (Irán Eory) Taylor and Alice’s brother John (Vanni Materassi, credited here as Richard Davis).  As their carriage travels through a barren, forest landscape with heavy rain, the atmosphere is suitably ominous, which beautifully sets the appropriate mood.  Upon their arrival at the secluded de Blancheville castle, Emily learns from her brother Rodrigue (Gérard Tichy), that her father perished when the old abbey burned down, but she is also intrigued by some new staff members including Miss Eleonore (Helga Liné), a rather cold-hearted but captivating woman clad in an all black dress and a mysterious doctor (Leo Anchóriz).  When Alice does the obligatory, but very welcome walk through the castle, she discovers a horribly disfigured man in one of the many darkly lit rooms.

According to the DVD, this was “loosely based on Poe’s The PREMATURE BURIAL” and, although it contains some elements from Edgar Allan Poe’s story, it’s certainly a bit of a stretch.  In actuality, this Italian/Spanish production was made in response to the success of Roger Corman’s AIP (American International Pictures) Poe pictures and in that respect, it succeeds pretty well.  Written by Giovanni Grimaldi and Sergio Corbucci (under their respective pseudonyms Jean Grimaud and Gordon Wilson Jr.), the film relies on an over abundance of dialogue, which, despite the rich atmosphere, is quite tedious under De Martino’s workmanlike direction with many of his actors.  At one point, during a somewhat convoluted sub-plot involving a family curse (“the House of de Blancheville will end with this generation, when the female descendent reaches the age of 21”), the film gets lost in some far-fetched ideas that, even for a horror film, don’t make a whole lot of sense.  On the other hand, De Martino does create a gloomy, palpable atmosphere thanks to both the castle itself and the numerous exteriors (including a terrific crumbling abbey and eerie forest locales) adding priceless production value to the rather conventional plot.  Still, despite some illogical missteps and too many talking heads, the film delivers all the usual ingredients of Italian gothics, which should leave most fans relatively entertained. 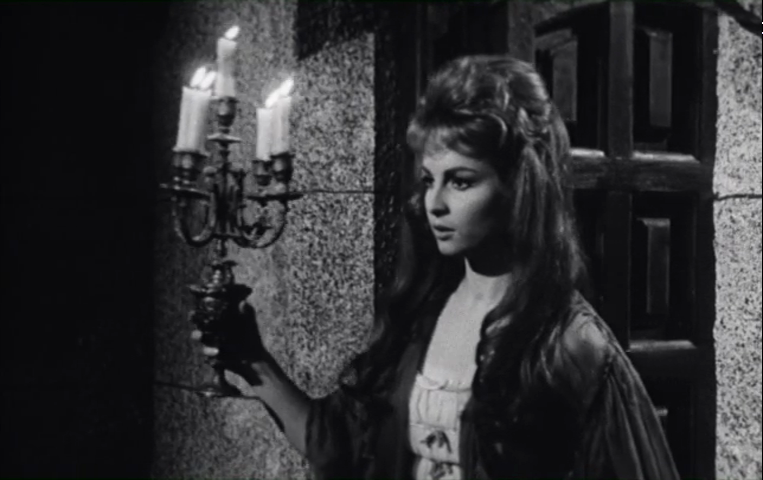 Originally released on DVD in 2004 as The BLANCHEVILLE MONSTER by Alpha Home Video, that transfer was indicative of the company’s many other releases with an outdated fullscreen transfer and smudgy picture quality. Retromedia has decided to put this out as a “50th Anniversary Edition” in a much nicer, 16x9 enhanced widescreen (1.66:1) version under its original and, incredibly bland, title HORROR and, although this version still looks a little tight on the sides in a few shots, the improved transfer definitely helps better appreciate Alejandro Ulloa’s moody B&W photography.  Unfortunately, the biggest drawback of this disc is the somewhat muted audio, which makes it difficult to make out some of the dubbed dialogue during quieter moments in the film.  In an odd choice, the disc also contains the 2003 Retromedia version of Mario Caiano’s NIGHTMARE CASTLE (1965) under their bogus title of The FACELESS MONSTER, a completely unnecessary extra following Severin’s beautiful and definitive DVD from 2009.  How they can do this is anybody’s guess.  You can order HORROR here.
Posted by Dennis Capicik at Sunday, December 29, 2013