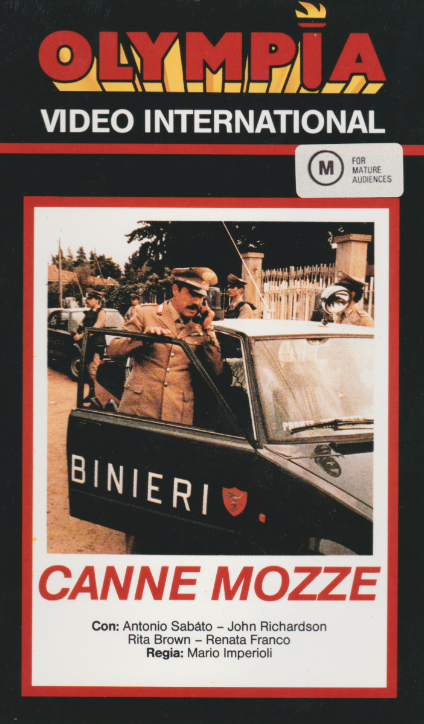 Welcome once again to the long, lost world of VHS tapes.  For this fourth installment, we’ll travel to the south of Switzerland and check out Mario Imperoli’s rarely seen 1977 poliziesco Canne Mozze.

According to early press announcements, Sabato’s character was supposedly based on Graziano Mesina, an infamous Sardinian bandit that was implicated in numerous kidnappings throughout the ‘60s and ‘70s.  During this time, he also became famous for a number of daring prison escapes and, subsequently, became somewhat of a folk hero among the younger generation in Italy.

In the Sicilian countryside, an unknown man is suddenly and ruthlessly gunned-down at the behest of the wheelchair-bound Don Carrara (Attilio Dottesio).  While in prison, Giovanni Mole (Antonio Sabato) learns of his brother’s death and is naturally bent on revenge, so during a routine transport, he overtakes a guard and seizes an opportunity to escape.  Desperate to find shelter, he wanders into an empty villa in order to hide from the onslaught of carabinieri searching for him, but his plans are soon thwarted with the arrival of Michele (John Richardson) and Silvia (Ritza Brown), the well-off rightful owners of this holiday getaway.

Although this film is “very loosely based” on Graziano Mesina (Mesina’s brother was actually assassinated in the fall of 1962, which prompted him to seek revenge that was unsuccessful), it is conceivable that usual actor and scribe Luigi Montefiori (better known to most as “George Eastman”) may have drawn some inspiration from some of these events, but the film’s association to the real life activities of Mesina are tenuous at best; perhaps it was nothing more than a marketing ploy at the time of the film’s release.  In actuality, the finished product has more in common with Sam Peckinpah’s STRAW DOGS (1971), which is especially evident during the middle portion.  However, instead of a tense nail-biting drama, Imperoli piles on the soft-core sex for much of the films 2nd act, but when one of Carrara’s soldiers shows up at the villa, the film really kicks into gear right up until the bloody showdown at a rundown slaughterhouse.

Director Mario Imperoli was a marginal talent within the Italian exploitation film world, who is probably best known for directing some of Gloria Guida’s first films such as BLUE JEANS (1975), which were typically light-hearted comedies that tended to have a slightly darker edge.  Canne Mozze on the other hand is a tough, gloomy film with a hopelessness that permeates just about every frame.  Every character in going through some sort of personal crisis; Giovanni has just lost his brother; Don Carrara is resentful that he’s stuck in a wheelchair; even Michele and Silvia are stuck in a loveless marriage, which is further complicated with the arrival of Giovanni.  The only glimmer of hope the film offers is Giovanni’s revenge against his slain brother, but even Giovanni is a hard character to root for.  The verbal and physical abuse he inflicts upon Silvia and Michele makes it very difficult to feel anything but contempt for him.   It would be interesting to see if Imperoli’s other crime film Come Cane Arrabiati made the year before is just as downbeat.

On the technical side, Canne Mozze benefits greatly from some solid camerawork courtesy of Romano Albani, a talented DP that went on to lens Dario Argento’s INFERNO (1980) and PHENOMENA (1984).  He creates some skillful compositions that highlight the beautiful surrounding countryside with an attentive eye for detail not usually seen in lower-budgeted efforts such as this, which, when complimented with Manuel De Sica’s morose, but highly effective score creates a suitably threatening atmosphere.  This is especially potent whenever Giovanni is roaming the countryside not knowing whether a carabinieri or one of Carrara’s soldiers could be lurking over a hill waiting to strike.  As usual, Sabato is convincing as the anti-hero and seemed perfectly suited for such roles while co-star John Richardson is virtually wasted in a dull, inconsequential part.  Sabato and Richardson also co-starred together in Gianni Siragusa’s minor caper film 4 BILLION IN 4 MINUTES (1976).

Apparently, this film actually had an English language version at least prepared and was also known as both SAWN-OFF SHOTGUN and VENDETTA – REVENGE OF THE MAFIA CLAN but this English version has never appeared on video anywhere in the world.  The southern region of Switzerland is home to a number of Italian-speaking Swiss citizens, so it’s no surprise that a number of Italian language tapes emanated from this part of the country.  This Swiss PAL VHS courtesy of Olympia Video International (they also released Gian F. Pagani’s 1978 poliziesco Porci con la P. 38 with Marc Porel) is a decent widescreen print, but it looks as though a few instances of below the waist nudity may have been edited out.  As of this writing, Canne Mozze still hasn’t received a DVD release anywhere in the world.
Posted by Dennis Capicik at Monday, December 09, 2013