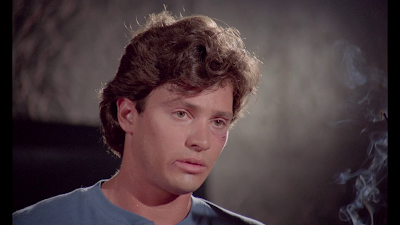 Released directly to U.S. videotape as AMERICAN TIGER during the early ’Nineties, this movie was readily available as commonplace ‘shelf-filler’ in most North American video stores. However, Sergio Martino’s AMERICAN RICKSHAW (1989) is anything but conventional. One of the loopier and truly unforgettable Italian films you’re ever likely to encounter, Martino’s genre mash-up now makes its North American HD debut thanks to a new specialty label on the block, Cauldron Films. 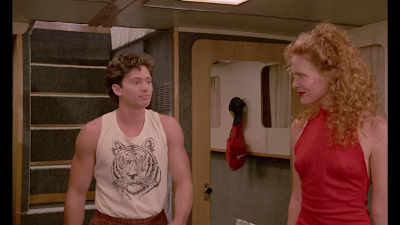 As he tries to get through college, Scott Edwards (Mitch Gaylord) ekes-out a living as a part-time rickshaw runner in the affluent Miami, Florida suburb of Coconut Grove. But his life is turned completely upside down when one of his fares, a slinky red-headed stripper named Joanna (Victoria Prouty), tricks him into making a sex tape aboard Jason Mortom’s (Gregg Todd Davis) swanky boat. In his haste to get off the boat, Scott gets into a fight with Jason and inadvertently steals the wrong videotape. Unaware that Jason is the son of a famous and influential TV evangelist named Reverend Mortom (Donald Pleasence), this sudden mix-up sets-off an utterly bizarre chain of events that jams together Chinese mysticism, an old witch, a megalomaniacal preacher, a seemingly unstoppable hitman, a ghostly Siamese cat and a hissing cobra snake, the last of which safeguards our frequently-confused hero. 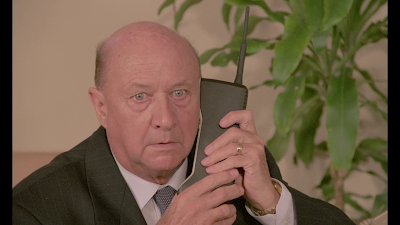 AMERICAN RICKSHAW is a tantalizingly engaging bit of Italian hokum, that no simple synopsis of its plot can adequately convey. Still, despite the ridiculous, anything-goes premise, it all works surprisingly well, given the usual by-the-numbers approach of most Italian exploitation movies during the late ’Eighties and beyond. Check out Umberto Lenzi’s generic crime actioner COP TARGET (1990)—or better (i.e., worse) yet, Bruno Mattei’s hilariously out-of-whack COP GAME (1988)!—for further confirmation of the rapidly declining state of Italy’s commercial cinema at the time. The opening sequence of AR is a particularly oddball attention-grabber: vividly shot in super-slow-motion during a sudden torrential downpour, Scott picks up Madame Moon (Michi Kobi), a frail old Chinese lady who becomes instantly enamored with his gallantry (and his tiger tank-top!). Later, when Scott gets embroiled in a possible murder rap and Reverend Mortom unleashes a black-clad hitman (Daniel Greene) to dispose of him, Madame Moon and her exotic ‘guardians’ watch over him during a succession of wacky encounters. Despite making very little sense whatsoever, the story largely revolves around a mysterious (quote) “stone of evil in the shape of an ugly boar”, which everyone is clamoring to get their hands on. However, thanks mainly to Martino’s energetic direction, Giancarlo Ferrando’s solid camerawork and Eugenio Alabiso’s offbeat cutting, the, um, ‘eccentric’ narrative moves at a satisfying clip while conjuring-up a strange, verging-on-surreal atmosphere. 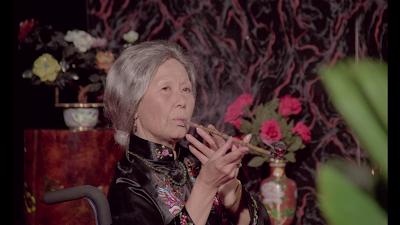 Following his lead in Albert Magnoli’s AMERICAN ANTHEM (1986), ex-U.S. Team Olympic gymnast Mitch Gaylord commits himself with the proper panache required of the role, while the alluring Prouty also fares fairly well, given her one-dimensional part’s lack of substance. In contrast, in one of the film’s more pivotal roles, Martino alumnus Daniel Greene plays the deadly hitman with cool detachment, adding extra dynamism to much of the film. Although his screen time is limited, Donald Pleasence is memorably over-the-top (even more so than usual!) as the swaggering preacher who displays less regard for the sanctity of human life than a Florida gator. Whether it was a deliberate stylistic choice or not, his southern accent veers around wildly throughout, which only adds to the film’s schizophrenic nature; a fact best exemplified in the head-scratching, eye-popping finale. 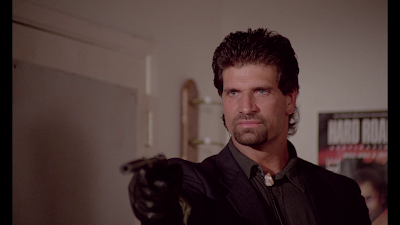 Presented here in a brand new 2K transfer taken from the original 35mm camera negative, Cauldron Films’ Blu-ray looks superb, with excellent detail and colour-saturation throughout, which brings out all the retro ‘Nineties kitsch on display. Compared to Austrian Cinestrange Extreme’s earlier Blu-ray, which featured some digital noise-reduction tinkering and a slightly different colour scheme, Cauldron’s new edition is a noticeable improvement in every way. The LPCM English mono track also sounds well-balanced and quite lively. In addition, the disc includes English SDH subtitles. 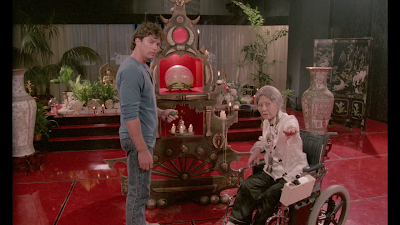 Kat Ellinger, author of All the Colours of Sergio Martino (Arrow, 2018), and writer and film critic Samm Deighan take part in an audio commentary wherein they share their adoration for Martino’s (quote) “joyful, gleeful and entertaining film.” They have plenty to say about the film itself, including regarding many of its (quote) “confusing plot points” and the (quote) “constant madness” that unreels on the screen. Of course, they also discuss Martino’s varied career at great length, including how he frequently broke conventions and just how (quote) “adaptable” he is as a director, even when working in the United States. They also talk about much of the film’s cast and crew, including prolific if rarely-discussed makeup effects man Rosario Prestopino. A long-time veteran of the Italian film industry (he also lent his talents to such Italian gut-crunchers as BURIAL GROUND and DOCTOR BUTCHER M.D. [both 1980]), Prestopino provides some brief-but-effective gore effects herein. 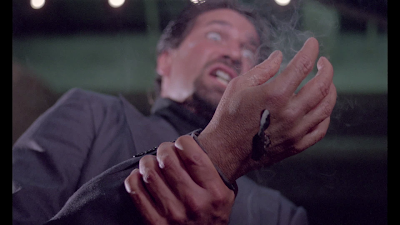 Eugenio Ercolani’s interview with Sergio Martino and production designer Massimo Antonello Geleng (18m30s), which first appeared on Cinestrange’s BD, is thankfully ported-over onto Cauldron’s disc. Focusing on his early beginnings, Martino discusses how he entered the film industry, as well as the financial crisis that adversely affected Italian film production during the ’Eighties. He also relates his experiences working on AR and opines how American crews lack an ability to improvise on set. Geleng, a prolific production designer, speaks warmly about Martino and his versatility as a director, equating him with a (quote) “orchestral conductor.” In the next significant extra, an entire episode of Mike White’s The Projection Booth (65m30s) dedicates their full show to Martino’s (quote) “bonkers” film. Guests include Cullen Gallagher and Kat Ellinger, both of whom delve into AR’s nuttier aspects in what turns out to be a detailed and delightful look at its numerous endearing qualities. Extras conclude with the brief Miami: Now and Then(2m52s) location tour, plus a thorough image gallery (1m04s) that showcases much of the film’s promotional artwork and various videotape releases from around the world. Cauldron’s original Limited Edition pressing also includes a colourful 8-page booklet of liner notes with an essay from David Zuzelo, as well as a nice sturdy slipcover.

Unlike anything else in his extensive and diverse filmography, Cauldron Films have given Sergio Martino’s colourfully outrageous AMERICAN RICKSHAW a first-rate HD presentation, which, of course, comes highly recommended! Pre-order the standard edition here.