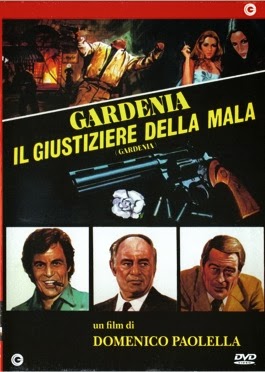 Like many of my previous poliziesco reviews, this was initially planned for a long-shelved book on Italian crime films entitled Vendetta Violenta written by Steve Fenton and myself.  Due to our busy working schedules, this was put on the backburner, so I decided to put some of my work up on this blog.

After directing STUNT SQUAD (1977), one of the better examples of poliziesco Italiano, seasoned director Domenico Paolella returned to the genre with GARDENIA (1979), a decidedly offbeat effort, which is essentially a vehicle for Italian pop star Franco Califano.  He stars as Gardenia, a lovable, but highly respected crook within the Roman underworld that runs the Mayfair restaurant that is host to a number of high-ranking mob figures.  One of these men is Salluzzo (Martin Balsam), who is currently organizing a major drug shipment with fellow mobster Caruso (Robert Webber), but when one of their reliable fences (Venantino Venantini) is ruthlessly eliminated, Salluzzo suggests using Gardenia and his restaurant as a front for their drug trade.  Gardenia refuses, so Salluzzo attempts to strong-arm him, which results in a messy explosion at the Mayfair and the death of one his employees.  Naturally, this infuriates Gardenia who then sets off on a slow and meticulous revenge involving everything from switching Salluzzo’s drug shipments to disrupting bank robberies and once Salluzzo gets wind of this, he vows to eliminate him regardless of his influential friends.

On paper, this sounds like any number of revenge-driven Italian crime flicks, but the overall feel is more redolent of say, the easy-going atmosphere of Lewis Milestone’s OCEAN’S 11 (1960), which is mostly due to Califano’s portrayal of Gardenia.  He exudes a very suave, cool and collected persona much like Frank Sinatra’s Danny Ocean did and although the film has a few nasty turns typical of the genre, his laid-back charisma definitely lightens the overall mood.  He may seem easy-going, but he outsmarts his enemies at each and every turn.  In one of the film’s understated, but effective action sequences, Gardenia learns of Salluzzo’s plan to rob the “Banca Popolare” so, along with his ragtag bunch of cohorts, he beats him to it, which results in the real thieves walking into an empty bank with a ticking time bomb awaiting them.

As mentioned earlier, Califano is primarily known as a pop star in his native Italy, but he is surprisingly natural in front of the camera and manages to carry the entire film with relative ease, an impressive feat despite being surrounded by Hollywood pros Martin Balsam (who’s unusually nasty) and Robert Webber.  His confidence throughout the film is very infectious, which also comes in handy during his numerous flirtatious interludes with various Euro-starlets including Maria Baxa, Lorraine De Selle, Lori Del Santo and Eleonora Vallone as his sultry main squeeze Regina who, unfortunately for him, doesn’t succumb to his charms that easily.

Obviously shot on the cheap, this was one of director Domenico Paolella’s last films before he retired the following year.  Like most studio directors of the time, Paolella migrated from whatever genre was popular, but his output during the more permissive ‘70s slowed considerably.  His most fervent working period was during the sword-and-sandal (or peplum) period that dominated Italian cinema screens in the early ‘60s, where he worked alongside such prolific stars as Mark Forest and Ed Fury.  Unlike his previous and very energetic poliziesco STUNT SQUAD, his direction is definitely more restrained this time and, despite Califano’s strong presence, Paolella and his scriptwriters (Teodoro Agrimi and Augusto Caminito) are simply going through the motions as well.  In fact, many of the exploitable elements, which are commonplace for any number of Italian crime flicks don’t ever materialize.  All the violence takes place off-screen and the sparse action is isolated to a few scenes; this could easily play on network television without any cuts.

Although released in English on PAL VHS during the ‘80s, GARDENIA has yet to show up on DVD in an English language version.  So far, the only release currently available outside the grey market is the Italian Cecchi Gori DVD (PAL but Region 0) and like that company’s other releases, it neglects to incorporate an English language track.  Picture quality is very good and the 1.85:1 widescreen image is also enhanced for 16x9 but, as usual, no extras are included other than optional Italian subtitles.  Even in non-translated Italian, GARDENIA is still an entertaining crime flick, which benefits greatly from Franco Califano’s assured performance who, along with Willy Brezza, also composed the film’s funky disco-inspired score, which suits his on-screen persona perfectly.
Posted by Dennis Capicik at Monday, January 13, 2014