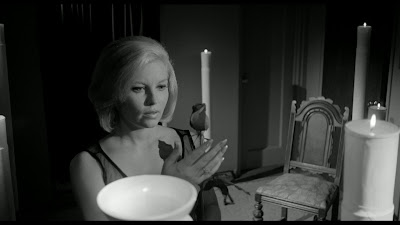 In what promises to be an exciting new line of titles in Vinegar Syndrome’s ever-exponentially-expanding film catalogue, Joe Sarno’s RED ROSES OF PASSION (1966) is the first release in their “Sexploitation Signature Series”, and is yet another sparse but typically tense melodrama, augmented by a hint of the supernatural.

Carla (Patricia McNair, hiding behind the alias “Laurene Claire”), along with her friend and co-worker, Enid (Carol Halleck), visit Martha (Helena Clayton), a tarot reader who turns out to be the high priestess of a shadowy cult that worships Pan, a (quote) “deity from ancient times.”  Believing that the spirit of Pan exists in all men and women, Martha and her followers indulge in spiritual unions where they indulge in the wine of Delphi and the touch of a rose, a process which unleashes the ultimate ecstasy or (quote) “the sweetest torment.”  Carla, who lives with her rather smug Aunt Julie (Liz Love) and cousin Tracey (Laura Landon), who just happens to be dating ‘nice guy’ Jay (Judson Todd), is fed-up with their conservative views and sneakily administers the wine of Delphi to them in their tea, which unleashes their innermost wanton desires… 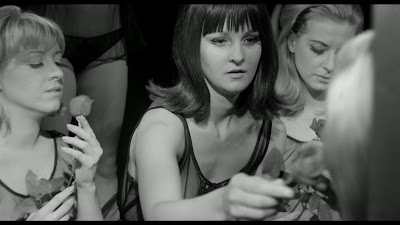 Simplistic in its conception, Sarno’s film is at odds with its economical approach and rather silly premise, which allows him to veer into unexpected, and most-welcome directions.  Relegated to just a couple of interior sets and a few brief exteriors – which were probably shot in a day – RED ROSES OF PASSION has plenty of dramatic tension, and despite some of the one-note performances (particularly Clayton’s), they actually work in the film’s favour, accentuating their characters’ unending devotion to (or perhaps possession by?) the Cult of Pan.  Building upon this, Sarno explores the sexual anxieties seething just below the surface of that period in time, which are laid bare with the mere touch of one of the title flowers.  The aptly-named “Liz Love” as Aunt Julie is especially convincing in her transformation who, like a drug addict, eagerly awaits the next delivery of those proverbial roses.  Patricia McNair also imbues Carla with ample amounts of curiosity and eagerness, which is quickly dispelled by desperation and fear when she is inducted as a priestess of Pan during what amounts to one of Sarno’s most deeply haunting and unforgettable conclusions. 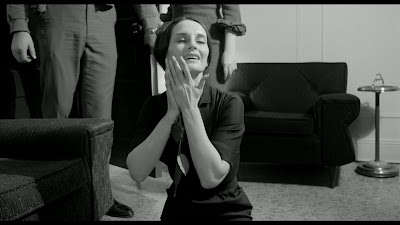 This is the second Joe Sarno film – following ALL THE SINS OF SODOM (1968) – to be released by Vinegar Syndrome, and it’s just as stunning a presentation, featuring another dazzling transfer.  This Dual Format Blu-ray / DVD combo is taken from a newly-scanned 2K transfer of the original 35mm camera negatives and boasts superb, deep black levels, which only accentuates Anthony Lover’s high-contrast photography, revealing every minute detail.  The DTS-HD MA mono audio also sounds impeccable, especially given the low-budget nature of the production. 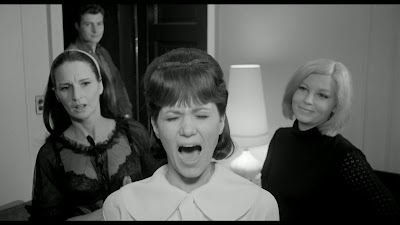 Unlike on their earlier Sarno Blu-ray, VS has here included Supernatural Sarno: An Interview with biographer Michael Bowen (20m49s), a much-welcome discussion which not only provides a number of details surrounding the production, but also puts RED ROSES OF PASSION into context within the rest of Sarno’s prolific career.  Bowen cites RRoP as (quote) “one of his favourite Sarno films…a transition film,” and goes on to talk about its problematic distribution history; its producer Gabriel Cicale, who also produced three other Sarno films (including FLESH AND LACE [1965]); plus plenty of background information about many of the film’s cast members.


Limited to a mere 2000 copies, this will undoubtedly sell out fast, so grab a copy of this compellingly offbeat film, which proves to be one of Joe Sarno’s most-alluring and distinctive films.  Order it directly from Vinegar Syndrome or DiabolikDVD.
Posted by Dennis Capicik at Tuesday, September 12, 2017