CRY OF A PROSTITUTE - BLU-RAY REVIEW

Bouchet, as Margie spits at Silva’s character: “Listen, Tony Annianti, stop the crap! We’re all whores in this world. The only difference is that you don’t sell your body, you sell your soul. And when it comes to nastiness, I don’t know which one of us’d win the Oscar!”

Based on an original story by Sergio Simonetti, director Andrea Bianchi’s CRY OF A PROSTITUTE (1974) incorporates many a spaghetti western motif while simultaneously combining key elements of Fernando di Leo’s THE BOSS and Vittorio Schraldi’s I KISS THE HAND, two other must-sees of Italocrime nihilism / misanthropy, both of which were made the previous year in ’73 (a fine vintage for the genre!). Absolutely raucous hard-rock power chords in the main title theme prepare you for one kickass viewing experience that really pours the slime into Crimeslime!

Right in the opening scene, traffickers employ the hollowed-out corpse of a young boy to smuggle heroin past border guards. Elsewhere, in Colipietra, Sicilian mob consiglieri under Don Cascemi (Vittorio Sanipoli) discuss the moral ramifications of using children as vessels for the ferrying of drugs. This is just one of the ‘innovative’ modern techniques exported to Sicily by Don Ricuzzo “Rico” Cantimo (Fausto Tozzi); a disgraced Mafia upstart who has been ingloriously deported from America because of his unscrupulous modus operandi. Back home on Sicilia, all-out gang war has since ignited between the equally volatile Cantimo and Scannapieco families.

Essentially reprising his ruthlessly charismatic title character from William Asher’s JOHNNY COOL (1963) – a role which he re-channeled often in his Continental crime flicks – here playing Don Cascemi’s cold, laconic hitman Antonio “Tony” Annianti (“I was never a two-bit crook!” he brags), Silva is first introduced while whistling an eerie personal signature tune punctuated by two perfect head-shots from his Lugar (which had also been the actor’s gat of choice in the aforementioned di Leo’s MANHUNT [a.k.a. THE ITALIAN CONNECTION, 1971]). No sooner have two of local mob capo Don Turi Scannapieco (Mario Landi)’s soldiers been ambushed and curtly dispatched by lupara-toting hitmen than Tony’s whistle – and pistol – resound yet again. Much like the disgraced Don Ricuzzo, Silva’s character – an expatriate Brooklyner – has some unconventional ideas of his own concerning mob business (“Because I’m a Sicilian. I was born in this country, and I hate and I despise those phony American Sicilians!”).

Although Tony has already ingratiated himself with Don Turi by rescuing a bushwhacked shipment of smack disguised as a wagonload of fresh-picked cherries, Don Ricuzzo suggests that the ambitious junior hood should collaborate with him in ripping-off the rival Scannapieco clan. To this end, Tony goes on to further curry favour with Don Turi by rescuing his gimp-legged grandson Zino from enemy gangsters (for the brutal coup de grâce, Silva squashes his victims [quote] “like pancakes” under a steamroller!). However, after Tony brutally beats Margie with his belt then rapes her again (this time against her will), instead of being aroused by it, Don Ricuzzo’s burgeoning respect for him quickly degenerates into a rage for revenge…

CRY OF A PROSTITUTE (as it was titled for the film’s mid-’70s stateside release by legendary exploitation distributor Joseph Brenner) ultimately illustrates how the itchy trigger finger of vendetta beckons throughout the entire mob pecking order, impersonally disregarding both age and gender. Action highpoints include a slow-motion canne mozze attack by Cantimo soldiers at the Scannapieco sawmill, and a nocturnal seaside gun battle between rival dope smugglers. In another top scene, the ever-badass Silva (“Look motherfucker, I repeat myself: clean my shoes!”) engages in a pitchfork duel with one of Don Turi’s strapping sons (played by bodybuilder/stuntman Pietro Torrisi) after he has publicly insulted his honour.

Plot-wise heavily derivative of Sergio Leone’s A FISTFUL OF DOLLARS (1964) and steeped in messy soap opera along with other negative side-effects of Roman Catholic repression (“Do you think there’s a God, Tony Anniante?” – “Sometimes…”), CRY OF A PROSTITUTE ends with a startling twist that’s every bit as cynical as you might expect considering all that has preceded it.

While it was originally released to U.S. theatres by Joseph Brenner Associates in 1975 with typical – and highly misleading – hyperbole (“For a lousy twenty-five bucks some people think they can do anything!”), most viewers probably stumbled onto this bloody mafia meller via Prism Entertainment’s clamshell videocassette from 1986, which also featured some equally misleading ad-copy (“She left prostitution… and found murder!”). Of course, that full-screen videotape severely compromised Carlo Carlini’s scope photography, and to top it all off, it also featured a substantially-truncated version of the film to boot. Earlier in the digital age, the film first surfaced in Italy on Flamingo Video under its original – and far blander – native title QUELLI CHE CONTANO (trans: “The Ones That Count”), which not only featured the original full 96-minute version, but also retained its original 2.35:1 Techniscope framing with 16x9 enhancement as well. Unfortunately, said disc only came with Italian audio and, despite finally retaining the proper aspect ratio, Flamingo’s version utilized a pretty beat-up transfer print, one which left a lot of room for improvement. The disc subsequently surfaced in Germany on Arcade Video as DIE RÄCHE DES PATEN (trans: “The Godfather’s Revenge”) in what appeared to be the same version, but with Italian and German audio options. 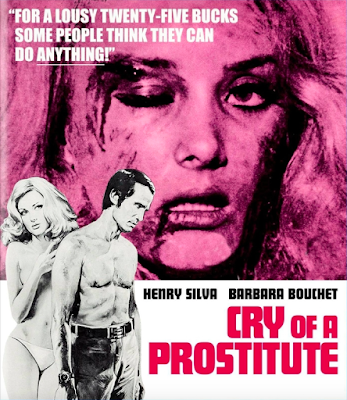 Licensed from Euro Immobilfin and Variety Communications, Code Red’s new Blu-ray is a vast improvement in every possible way. Taken from a (quote) “Brand new 2017 HD scan from the original nagatives”, their disc features a much-more-robust colour palette with solid details and healthier black levels, unlike the rather flat-looking Italian DVD. The DTS-HD MA mono audio also sounds solid and is about what you’d expect from many of these Italian-dubbed imports, but thankfully, (as he typically did) Henry Silva stuck around long enough to supply his own voice (hence earning himself an extra paycheck for the ‘overtime’). More importantly, though, Code Red’s disc represents the first time that this longer cut of the film has ever been made available in English anywhere in the world. The lengthier print features a number of quite significant additional dialogue exchanges, which not only help the flow of the film, but are also quite integral in helping to flesh-out the various characters and their motivations.

Extras are limited to Joseph Brenner’s altered – and severely-edited – opening sequence for the film, featuring those above-mentioned ‘raucous hard-rock power chords’, the film’s U.S. theatrical trailer and bonus trailers for some of Code Red’s other current and upcoming titles, such as Umberto Lenzi’s THE DEATH DEALER (a.k.a. ALMOST HUMAN [1974]), which features similar Joseph Brenner ballyhoo (e.g., “Morally and sexually this motion picture may shock you. But it’s an experience in psycho-sadism you will never forget!”), Sergio Martino’s THE VIOLENT PROFESSIONALS (1973), Ferdinando Baldi’s globe-hopping THE SICILIAN CONNECTION (1972), plus Clark Worswick’s obscure American-made mob opus FAMILY HONOR (1973). Order it from DiabolikDVD.
Posted by Dennis Capicik at Friday, September 22, 2017