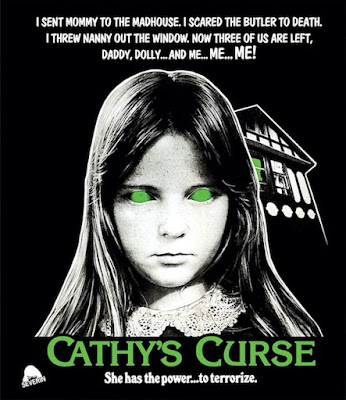 Having for the longest time been unceremoniously relegated to dusty, overflowing bargain bins via countless DVD multi-packs in various hard-on-the-eye cheapo versions, Eddy Matalon’s CATHY’S CURSE (1976) hasn’t fared very well in the digital format; however, in light of Severin’s flawless new Blu-ray edition, that oft-used phrase “It’s like seeing it for the first time!” really applies, as truer words have seldom been spoken!

From its opening moments, CATHY’S CURSE has a strange, unnerving temperament to it; so typical of many a Canadian-lensed horror film of the period, which is quietly demonstrated in the rather distressing opening sequence, set in 1947.  On a particularly spooky night, Robert (Peter McNeil) Gimble arrives home to not only discover that his wife has up and left him flat, but that, making matters worse, she has also made off with their young son George…yet in the process leaves their daughter Laura (Linda Koot) behind.    With his daughter in tow, Robert drives off into the night in the hopes of tracking down his runaway spouse, only to lose control of the family car on the rain-soaked streets, causing both he and his daughter to burn to death in the ensuing wreck.  30 years later, George (Alan Scarfe) returns ‘home’ with his unstable wife Vivian (Beverly Murray)—who has recently recovered from a nervous breakdown due to the loss of her most recent child—along with their daughter Cathy (Randi Allen) who, almost immediately, begins exhibiting odd behaviours when, up in the attic, she finds a raggedy old doll—with its eyes sewn shut, mysteriously enough.

In terms of scene-structure or, to be more precise, general cohesiveness, CATHY’S CURSE is a little all-over-the-place, but it’s this skewed, screwily-schizoid logic which actually develops into one of the film’s strongest assets.  By 1976, following on the heels of William Friedkin’s THE EXORCIST (1973), films about possessed kids were already beginning to saturate the horror genre, with the likes of Richard Donner’s THE OMEN (1976) and Robert Wise’s AUDREY ROSE (1977); the latter of which, rather curiously, essentially tells the same story as CATHY’S CURSE. But Matalon’s film is so distinctive and so odd—oftentimes for the wrong reasons—that it’s hard to shake from your memory.  As with many low-budget films, the film’s most major failing is its script (or rather, lack of one!), which, according to Joyce Allen (CC’s costume designer, who is also the mother of the film’s juvenile star, Randi Allen) wasn’t given to them until the first day of the shoot!  Despite this unusual tactic, the acting is, for the most part, quite decent, considering the decidedly scattershot nature of it all.  At one point, Agatha (Mary Morter), one of the neighbourly women, who ‘just happens’ to also be a clairvoyant, begins to suffer from horrible visions involving the long-deceased Laura; but her character is never fully-developed, and even when she does return to the house, she’s degraded (“Fat, dried-up whore!”) by Cathy, and told never to return.  In yet another plot device, which rapidly goes nowhere, the local detective (Sony Forbes) is investigating the sudden unexplained death of Mary (Dorothy Davis), one of the house’s caretakers. However, instead of becoming a primary character, he shortly disappears just as quickly as he was introduced.

Further weirdness ensues when Paul (Roy Witham), the other house’s caretaker, is enveloped by snakes, rats and spiders while Cathy watches mischievously. And of course, no one ever believes Vivian when she tells them that her daughter is evil incarnate (“I don’t know how to explain it, but something’s wrong”), who also suffers from possible nightmarish hallucinations—but does she really?—whilst taking a bath, when the water seemingly turns blood-red and she becomes covered in leeches.

One of the film’s more interesting subtexts entails Cathy’s—uh, Laura’s, I should say!—hatred of her mother, or why she abandoned her in the first place.  Other than for a single throwaway line heard during its pre-credit sequence (“Your mother’s a bitch! She’ll pay for what she did to you!”), it’s never really made clear at all.  Was she neglected or otherwise abused, or was Laura’s father Robert just pissed that she got dumped by her mom?  Or perhaps Laura had been already exhibiting malevolently malicious traits, hence her abandonment?  Maybe Laura’s mother wasn’t the one to blame and was merely stuck in a luckless marriage, so decided to just take off; a drastic step which, in 1947, would have been a very uncharacteristic one for any married woman to make.  This is further exemplified, however subtly, when Cathy displays the very same kind of hatred, as even her mother goes through a crisis of her own while George is always away working, nowhere to be found.


For anyone seeing CATHY’S CURSE for the first time, they should be pleasantly surprised by the film’s unusual approach to the material—whether it was intentional or a budgetary necessity—and, for anyone who has ever endured any of the prior cruddy bootleg editions, they will be awestruck by the sheer crystal-clarity of it all, and as usual, Severin also includes some highly interesting extra features, which only sweetens the deal.  The first extra is Tricks or Treats (20m15s), an on-camera interview with Eddy Matalon, wherein the French-born director discusses taking advantage of Canada’s then-flourishing ‘Tax Shelter’ subsidies, also discussing the extraordinary Roy Witham, who was (quote) “kind of crazy”, as well as his love for (quote) “Anglo-Saxon films” and his dissatisfaction with current SFX movies.  In Cathy and Mum (12m42s), Randi Allen displays some of her mother’s newspaper clippings related to the film, and seems shocked that people are still talking about it some 40 years later, while Joyce Allen discusses the spontaneity of the production and also her surprised reaction when she realized that it was a horror film they had signed-on to.  The disc also features a very relaxed (and much-too-apologetic!) audio commentary track from BirthMoviesDeath critic Brian Collins and filmmaker Simon Barrett, who express their love for the film, including discussing many of its glaring inconsistencies and general weirdness.  Other extras include an intro to CC’s Cinematic Void screening (4m27s), plus its original U.S. theatrical trailer, which has been cleverly reedited to incorporate the newly-restored print’s imagery.  Lastly, Severin has also included both the original—and actually superior—91-minute director’s cut, as well as the more-familiar 82-minute U.S. theatrical version, as was originally released back in the day by 21st Century Distribution.

Though heavily-flawed, CATHY’S CURSE reveals itself to be a consistently compelling little film; which, thanks to Severin’s wonderfully crisp and pristine restoration, has never looked better, and it’s already lining-up to be one of the BEST discs of 2017!  Order your copy from Severin (Blu-ray or Cathy’s Cursed Bundle) or via DiabolikDVD today!
Posted by Dennis Capicik at Wednesday, April 05, 2017