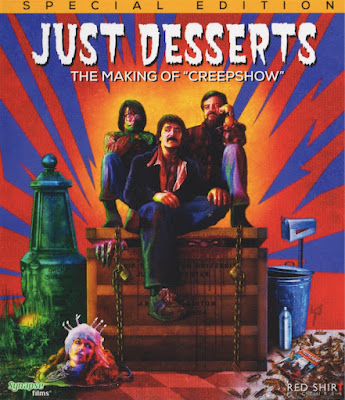 Produced through his prolific Red Shirt Pictures, director Michael Felsher has enhanced many a DVD and Blu-ray over the years with his numerous documentaries and special features, but JUST DESSERTS, in my humble opinion, is his magnum opus, a beautifully-constructed and fascinating look into the making of George A. Romero’s CREEPSHOW (1982), the much-beloved – and rightfully so – ’80s horror classic.  Originally conceived for Universal’s 2-disc, U.K.-only DVD released in 2007, this documentary, unfortunately, never made it to the domestic DVD or Blu-ray, but because Universal owned the rights to CREEPSHOW solely in the U.K., this caveat enabled Felsher to retain the rights for the rest of the world.  Thankfully, in conjunction with the good folks at Synapse Films, he has decided to release this magnificent doc as an extras-stuffed, stand-alone Blu-ray, which, even if you own either the 2-disc DVD or the more recent U.K. Blu-ray from Second Sight, Synapse’s Blu-ray contains numerous extra goodies to warrant a double-dip.

Much like the film it celebrates, JUST DESSERTS unfolds like an anthology, with various chapters dedicated to film’s development and production, and in “The Monster Man”, an entire chapter is devoted to Tom Savini’s incredible special makeup effects.  In the first chapter, cheekily entitled “An E.C. Way to Start”, Romero talks about the influence of the now-infamous E.C. horror comics from the ’50s, as well as the film’s initial conception, including Romero’s first meeting with Stephen King to discuss the possible filming of King’s novel Salem’s Lot.  At the time, both he and King, along with Richard P. Rubenstein – Romero’s producing partner and co-owner of Laurel Entertainment – were considering developing King’s epic novel The Stand as a major motion picture, but they didn’t have the necessary budget, or (quote) “clout”, so the idea was abandoned. They were thankfully doggedly determined to work together, however.  Their love for E.C. Comics became the genesis of CREEPSHOW and, as promised, 60 days later, Stephen King delivered his screenplay to Rubenstein.

Some of the other chapters herein include: “Acting Scared”, “A Comic Book World”, “Creepy Crawlies”, “Anthology Unleashed” and “25 Years Later”, which cover virtually every facet of the film’s production, reception and ongoing popularity, and which are peppered with superb interviews from the likes of Romero, Rubenstein, Savini, composer and assistant director John Harrison, editor Pasquale Buba, artist Bernie Wrightson, plus ones with cast members Ed Harris, Adrienne Barbeau, Tom Atkins, and many others besides.  Of course, Romero and Savini dominate the bulk of the screen time, and as the documentary unfolds, we see that Romero and his crew were, quite obviously, consummate professionals, yet at the same time they were obviously excited to be working with such a stellar cast; even Romero himself at one point expresses his (quote) “intimidation” about working with some of these seasoned Hollywood veterans – including Hal Holbrook, Fritz Weaver and E.G. Marshall – while Savini relates a story about his admiration for star Vivica Lindfors and her role as Queen Margaret in Vincent Sherman’s Errol Flynn vehicle The ADVENTURES OF DON JUAN (1948). But, still more importantly, JUST DESSERTS captures a sense of the incomparable camaraderie felt by participants throughout the shoot, which seems almost impossible to recreate in these hectic and increasingly profit-driven days; as Romero calmly states at one point, “It was a wonderful experience.”  Interspersed throughout the interviews are tons of excellent, rarely seen behind-the-scenes photos and on-set video footage courtesy of Savini, and, thanks to John Harrison, it’s all scored with his highly compelling and memorable CREEPSHOW score, an absolutely inseparable blend of piano and synth, which is just as effective today as it was 34 years ago.

Nothing but praise should be given to Synapse and their remarkable Blu-ray, which is absolutely filled-to-the-brim with extra features, including two separate commentary tracks.  The first commentary features Felsher discussing his overall career, beginning at Anchor Bay, and then covers the logistical complexities of putting together this doc.  The second commentary brings together John Amplas (who played the rotting zombie Nathan Grantham in the “Father’s Day” episode, as well as the title character of Romero’s own MARTIN [1977]), property master Bruce Alan Miller and special makeup effects assistant Darryl Ferrucci, none of whom were available for comment during the actual filming of JUST DESSERTS, so it’s always interesting to hear even more anecdotes related to the filming.  Speaking of which, in “Creepshow Days”, one of the many other extras included on the disc, director of photography Michael Gornick also gets his say on the nature of the production.  Other extras include extended interviews with Romero, Savini and Wrightson; “Horror’s Hallowed Grounds”, with host Sean Clark, follows Clark as he conducts a guided tour of the many Pennsylvanian locations, and we also get a 1982 Evening Magazine segment shot on the set of the film.  However, the real icing on the cake, and one of this generous package’s most significant extras, is SCREAM GREATS VOLUME 1 – TOM SAVINI, a Fangoria-produced documentary from 1986, which has been absent on U.S. home video for far too long.  But even that isn’t all we get! As an extra added bonus, this documentary also features an additional audio commentary with Felsher and Savini.


Beautifully packaged, including a cool rendition of Paul R. Gagne’s – author of the 1987 book on George A. Romero’s career The Zombies That Ate Pittsburgh - original cover photo from a 1982 issue of Cinefantastique, Synapse Films’ beaut of a Blu-ray is a true labour of love, and one which any discerning fan of CREEPSHOW shouldn’t be without.  By all means, don’t hesitate to pick this up!  Order it from DiabolikDVD.
Posted by Dennis Capicik at Monday, July 11, 2016