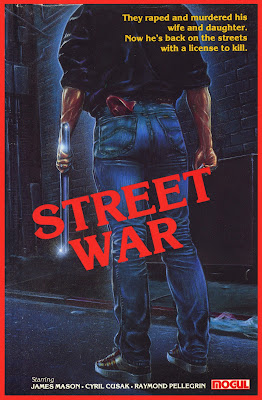 Early English export press synopsis: ‘An elderly police captain, recalled to the force after being pensioned off, succeeds in his highly personalized manner, in fighting and ridding the city of a gang of criminals.’

Translation of an original Italian newspaper ad: ‘In a City Overrun with Crime, The Law’s Last Resort is Inspector Murri!’

Desk jock Franco Ressel, to career beat cop Maurizio Merli: “Have you gone crazy? You can’t just take the law into your own hands! Who the hell do you think you are?!”

Merli as Murri: “We have hijackers who say they’re ‘political scapegoats,’ bank robbers who go to jail for a rest cure, criminal violence is sweeping the country, and the Prosecutor’s allergic to bad press!”

Originally titled PAURA IN CITTÀ (“Fear in the City”) and also released in English-dubbed form as HOT STUFF, this 1976 release directed by Giuseppe Rosati – who also helmed the well-above-average crime drama SILENCE THE WITNESS (Il testimone deve tacere, 1974) – was the first film produced by Triomphe Cinematografica (formerly known as Castoro Film), a company jointly owned by Italocrime top gun “Lee Beaver”/Carlo Lizzani and producer Giuseppe Vezzani. Early in this film’s genesis, Jack Palance was hoped to co-star under Mason, but did not (at that time Palance would have been busy on any number of other take-the-money-and-run Italo projects). To stress the topicality of its subject matter, the present film’s original Italian title given above later reappears during the narrative as an incidental newspaper headline.

Incarcerated criminal leader Alberto Lettieri (genre regular Raymond Pellegrin) leads his gang on a massed breakout from the Carcere Giudiziario in Rome. Making good their escape in a paddy wagon, the fugitives – a dozen strong – take along a hostage for security. No sooner are they at liberty than Lettieri’s mob commences a succession of hits on squealers (“It’s as bad as the St. Valentine’s Day Massacre!” remarks one observer). By no means coincidentally, all four victims had been instrumental in Lettieri’s conviction. Against the better judgement of the Polizia Commissioner (Mason), to ensure results the Minister of the Interior demands that he assign disgraced hotheaded Inspector Mario Murri (Merli, natch!) to the case. Murri had been under official suspension from the force, until ordered reinstated by the Minister. “One thing, however, you must get into your head,” explains Mason to Merli, “is that there’s to be no shootouts.” He then qualifies this statement with, “…unless of course it becomes absolutely necessary” (which we know it shall be!). In response, Merli replies, scarcely able to contain his contempt, “That’s easy to say, sir. Naturally, everything looks rosy from behind a desk!” Having gone after Lettieri’s ruthlessly violent crew in his inimitable take-no-prisoners fashion, Murri is commended by the Minister but condemned by the Prosecutor for using excessive force. Following further accusations of this, the Prosecutor places Murri under official judicial inquiry, accused of police brutality, for which the inspector again potentially faces being suspended without pay. Asking for just 48 hours longer to nail the case up tight, Insp. Murri goes on to foil Lettieri’s criminal master plan...

This time out, Merli (“Wanna know what the shrink says about me? I’ve got a death wish!”) is initially introduced catching fish rather than crooks. He manfully smokes extra-strength, filterless, alveoli-clogging Marlboros and flashes back nostalgically to memories of his wife and daughter, who had fallen victims to a mob car-bomb (shades of  Duccio Tessari’s awesome TONY ARZENTA [1973], starring Alain Delon in the title role). During a later scene here, Merli is attacked by gunmen right at his dear departed loved ones’ graveside, whereafter he contemptuously plugs one attacker right in the forehead and back-shoots his accomplice. Elsewhere, Murri deals more even-handedly with some rowdies on the public transit system after they vandalize a passenger’s glasses (“Driver, stop the bus! These clowns are getting off!”). With the driver and conductor’s help, he then shows them the door, exercising far more ‘diplomatic’ restraint than Merli cop characters were generally known for. Complete with ‘you-are-there’ POV shots through its handlebars and super-boosted along by scorer Giampaolo Chiti’s raucous piano ’n’ bass accompaniment, Merli – doing his own riding stunts – commandeers a motorbike to chase down two rappinatori (“robbers”) mounted on a similar machine. As a consequence of the bikers’ reckless riding, a Ford Capri plows through a flower stall, after which the star first ‘trips-up’ the front wheel of their bike then goes mano a mano to capture the perps. This soon segues into an encounter with Pellegrin’s gang, resulting in an armed standoff during a bank heist. Merli thereafter stalks the culprits with a machinegun in a darkened, arched catacomb. 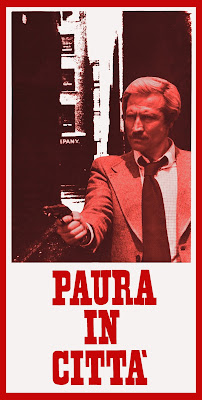 Frequent genre guest star Cyril Cusack – one of whose most noteworthy outings is Fernando di Leo’s raucously rambunctious crowd-pleaser THE ITALIAN CONNECTION (La mala ordina, 1972) – is cast against his usual type as Giacomo Masoni, an accountant who served hard time for mercy-killing his wife, then ‘escaped’ from stir along with Pellegrin’s gang with only 40 days remaining on his sentence. In actual fact he had been the gang’s unwilling hostage, and Cusack is subsequently strangled to death by Pellegrin after he outlives his usefulness (in a later scene, Pellegrin’s Lettieri character – who is not a nice fella! – beats a railway worker dead with a shovel). Once leading lady Silvia Dionisio (one of the many main squeezes of director Ruggero Deodato) shows up playing Cusack’s onscreen niece, a high-priced call girl named Laura Masoni, the plot spends a bit too much time dwelling on Merli’s and Dionisio’s burgeoning romance, which at least includes her treating him to a slinky striptease. It develops that her late pops – a former railroad employee – had been abducted by Lettieri expressly in order to provide the gang with vital information pertaining to a Bank of Italy robbery involving up to 20-million lire’s worth in old bank notes destined via train from Milan for incineration at the Rome mint. To pull off this their biggest heist, Lettieri’s gang disguise themselves as carabinieri; but when their scheme is exposed, a desperate climactic shootout erupts at a railway siding.

Composer Chiti’s score accents avant-garde jazz, and for the most part might have been better suited to a giallo, and some funkier compositions would perhaps have been more apt here. A stylish freezeframe technique used in the opening jailbreak provides us with a handy ‘mugshot’ of each escapee. 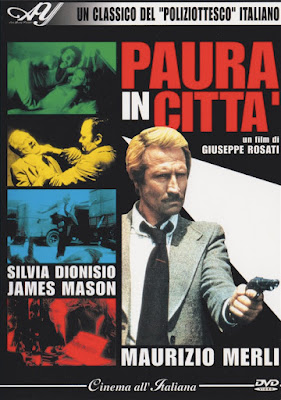 A drag hooker informer (“Whaddaya say to some head?”) is executed by hoodlums. A vicious bank robber coldcocks an elderly priest named Father Saverio (Carcano) in the face with his gun barrel and sneers, “Whaddaya think this is, a confessional?!” The poor clergyman is then made a hostage (“‘Mr. Meek’... you better pray, cuz ya never know when ya gonna meet ya Maker...”). To the piously forgiving Fr. Saverio, Merli subsequently remarks, after decimating the bank robbers, “I’m at peace with myself. I’m not sure about these corpses. They’re the ones that need to be forgiven. Go hit ’em with a coupla ‘Hail Marys’!”

Ressel (“I have an innate distaste for illegal police activity!”) plays the Assistant Prosecutor Dr. LoCascio, who is described by Mason as someone who’d “be happy to put handcuffs on everyone – including the police!” Mason (whose aide is played by Claudio Nicastro, another seasoned genre character player) also opines, regarding Merli, “It’s a sad comment on the state of the world that men like you are so badly needed.” While not without its share of decent lines, dialogue is generally rather poorly dubbed, it should be said. While the name-brand English star obviously didn’t stick around long enough to dub his own lines, they were post-synched by a passable Mason soundalike whose voice is just a couple octaves too high.

As our antsy antihero expectedly guns down Pellegrin in the last act, we never do discover whether he was the one responsible for the killing of Merli’s family or not. The film ends with Merli as Murri returning to exile, taking Dionisio along for company. When all is said and done, STREET WAR (the film’s ’80s Mogul Communications domestic home video title) emerges as a fairly solid if unspectacular addition to the genre.


Notes: STREET WAR was first released on Italian Region 2 DVD in 2003 via Alan Young Pictures, which to this day, remains the definitive version due to the simple fact that it contains an English language audio option.  Enhanced for 16x9, the disc also contains a photo / poster gallery.  This disc was included in Alan Young Pictures’ “Poliziottesco Italiano Box Set”, alongside Stelvio Massi’s EMERGENCY SQUAD (1974), Michele Massimo Tarantini’s CRIMEBUSTERS (1976 – no English audio) and Paolo Lombardo’s DAGLI ARCHIVI DELLA POLIZIA CRIMINALE (1975 – no English audio).  A few years later, this AYP disc was also bootlegged in the U.S. by Alfa Digital as FEAR IN THE CITY, and then later, it was re-released in Italy by Cecchi Gori, but minus the English language audio option.
Posted by Dennis Capicik at Tuesday, July 05, 2016