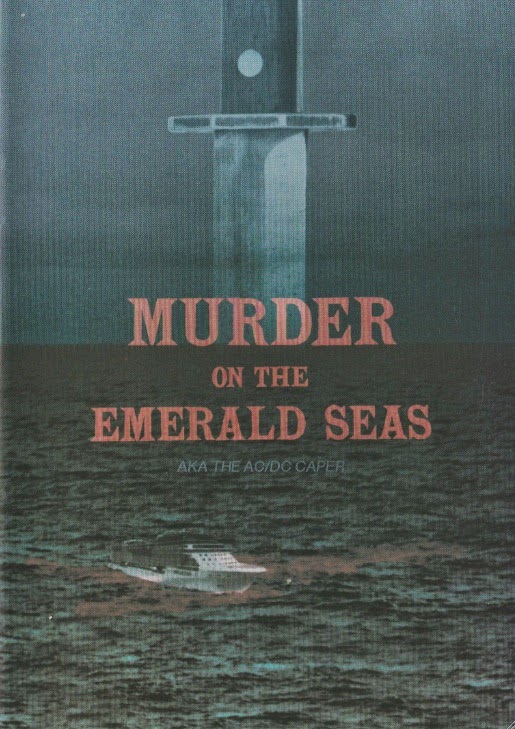 At the recent Cinema Wasteland Movie & Memorabilia Expo held on the 3rd, 4th and 5th of October, Vinegar Syndrome released Alan Ormsby’s once thought-to-be-lost MURDER ON THE EMERALD SEAS (1973 – the end title card lists the film as ‘74) as a special Cinema Wasteland limited edition DVD.  According to Vinegar Syndrome’s director of production Ryan Emerson, Exhumed Films provided the original 35mm film print and, despite some tattered reel changes, it looks surprisingly good.

Also known as The GREAT MASQUERADE BALL or The AC/DC CAPER, this odd comedy was filmed a year after Bob Clark and Alan Ormsby’s CHILDREN SHOULDN’T PLAY WITH DEAD THINGS (1972) and even utilized some of the same cast members.  Revolving around The Artists and Models Ball organized by “one of the richest men in America”, Sherwood P. Gates (Roberts Blossom – appearing a year before his truly unnerving role in Ormsby’s DERANGED [1974]), this prestigious event has been marred by murder when “each beauty met a horrible death shortly after being crowned Queen of the Artists.”  In order to end this “jinx”, Mr. Gates decides to move the event onto his cruise ship, the SS Emerald Seas, but the Miami Police Department is also keen to apprehend this mysterious beauty queen killer, who, for reasons unknown, dresses as a clown.  They assign rookie cop Dave Collins (Robert Perault), but much to his chagrin, he has to dress in drag to try and lure the killer out into the open.  Will the police finally “put their foot down on Sherwood Gates Balls?”

Puns, innuendos and the above mentioned double entendre is just one such example of the lowbrow humour that pervades much of the film.  Originally conceived as a comedy and similar in concept (on a tenth of the budget) to Mel Brooks’ then-current, but still unreleased films, BLAZING SADDLES (1974) and YOUNG FRANKENSTEIN (1974), MURDER ON THE EMERALD SEAS is just as much a spoof on past Hollywood cinema – this time it’s silent films.  Keystone cops out of a Mack Sennett production, animated title cards, a score right out of the ‘20s courtesy of Michael J. Valentino and broad caricatures typify much of the film, although this time, it’s all mixed together with elements from Bruce Kessler’s The GAY DECEIVERS (1969) and typical ‘70s sleaze.  At one point, Dave is sent to Charm School and learns how to “regard himself as a creation and not a freak” and to “move with grace”, but then at the Ball as Faith Cummings (his new identity), he accidentally takes a piss standing up as a perplexed Mr. Gates catches him in the act.  Of course, in another typically clichéd but funny moment, Mr. Gates still hits on him despite his “strong grip”.  But Mr. Gates has bigger problems than gaining the affections of Faith, his mobster buddies including Vito Veto (Lee Sandman) and Paco the Paranoid (John Di Santi) are also on board the Emerald Seas and need his help.

Shot in Miami, Florida, much of the nudity and sleaze in this current version (including the great opening) were most likely added at a later date to help improve the marketability of this barely released film, which didn’t seem to help and the film sank into obscurity just the same.  Directed by “Frank M. Grinter”, these additional scenes could have been the work of Brad F. Grinter, a fellow Florida exploitation filmmaker responsible for Veronica Lake's last film FLESH FEAST (1970) and the mind-boggling BLOOD FREAK (1972).  Of course, its just speculation, but it wouldn’t be surprising.  The names are just too similar to casually dismiss.

Although this was Robert Perault’s first film, he’s actually pretty funny in that naïve sort of way as he slowly uncovers the main culprits of this whacky whodunit and, yes, he looks completely ridiculous as a “Spanish senorita” in the film’s climatic beauty pageant.  Roberts Blossom is easily the most accomplished actor in this ensemble piece and, after his work with Alan Ormsby, he became a fairly successful character actor in such Hollywood blockbusters as Steve Spielberg’s CLOSE ENCOUNTERS OF THE THIRD KIND (1978), Don Siegel’s ESCAPE FROM ALCATRAZ (1979) John Carpenter’s CHRISTINE (1983) and the mega-blockbuster HOME ALONE (1990) as Macaulay Culkin’s creepy next door neighbour Old Man Marley.  In keeping with its Florida roots, the rest of the cast is comprised of locals that have appeared in numerous low-budget flicks of the period.  Gay Perkins as Sherwood’s girlfriend appeared in William Grefe’s The HOOKED GENERATION (1968) while Dick Sterling, as charm school director Gregory La Salle, also showed up in another Grefe film, MAKO: THE JAWS OF DEATH (1976).  One of the more interesting cast members was character actor John DiSanti, who went on to appear in Bob Fosse’s LENNY (1974), Dom DeLuise’s HOT STUFF (1979) and as J.J. “Gross Out” Gumbroski in Ken Wiederhorn’s ANIMAL HOUSE (1978) rip-off KING FRAT (1979).  Anya Ormsby (as Dave’s confused girlfriend), Paul Cronin (as Casey, a fellow cop) and Jeff Gillen (as a dim-witted scapegoat) all appeared in CHILDREN SHOULDN’T PLAY WITH DEAD THINGS a year before.  Also look for ex-Tarzan Johnny Weissmuller as a beauty pageant judge and comedian Henny Youngman at a local fleapit bar in one of the silliest cameos ever.

Properly shown in its original 1.85:1 aspect ratio, this limited edition DVD has a print run of 500 copies and may become available via Vinegar Syndrome’s website at a later date, so check periodically.  Also, check out Chris Poggiali’s essential Temple of Schlock for further information on this now, thankfully, recovered film.