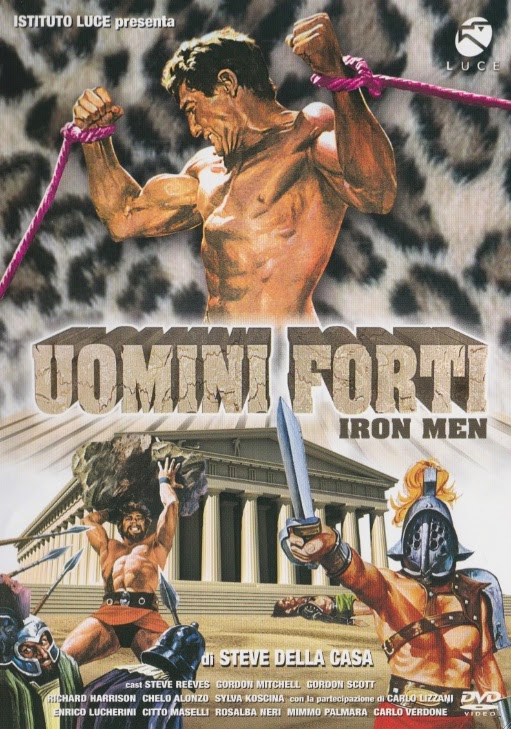 Following the enormous worldwide success of Pietro Francisci’s HERCULES (1958) and its star, ex-bodybuilder and Mr. Universe Steve Reeves, Italian film screens were suddenly flooded with characters like Maciste, Hercules and Ursus.  Steve Della Casa’s short but informative documentary charts the sudden popularity of these films, its stars and the Italian film industry, which at the time, became known as “Hollywood on the Tiber”.

Through the use of rare archival footage and contemporary interviews, this nostalgic look at the once burgeoning Italian film industry focuses much of its attention – at least in the beginning – on Steve Reeves and his extraordinary success.  In a particularly lively bit of archive footage, our enthusiastic narrator remarks, “even the nobility opened castles and gateways for Mr. Muscles” and, in an interesting revelation, it was in fact actor Mimmo Palmara who suggested to Mr. Francisci to hire “American bodybuilders”.   Of course, this led to other ex-bodybuilders such as Gordon Mitchell, Gordon Scott, Mark Forest and many others anxiously following in the footsteps of Mr. Reeves.  In one of the many interview segments, director Carlo Verdone recounts, rather fondly, about the popularity of these films and their stars when his Aunt Lina would take him to the movies “twice a week” to see many of them.

While much of the doc’s attention is primarily focused on these “uomini forti”, many of the film’s starlets (“brunettes were wicked and the blondes were handmaidens”) are also given their due through the use of even more fascinating archival footage.  Sylva Koscina, Moira Orfei, the “fiery” Cuban-born Chelo Alonso are all highlighted while the once elusive Rosalba Neri grants another terrific interview, which includes some funny anecdotes related to Tanio Boccia’s HERCULES OF THE DESERT (1964).

Director Steve Della Casa also touches on the many American productions that took full advantage of the cheaper production costs in Italy to help produce their “historical epics”, one of the catalysts that also spawned the “sword-and-sandal” genre throughout Italy.  Footage of Richard Fleischer on the set of BARRABAS (1961) and Victor Mature filming Edgar G. Ulmer’s HANNIBAL (1959) are some of the highlights.

Not as thorough as it could have been, the short running time – just over 45 minutes – suggests this was originally made for Italian television, but UOMINI FORTI is still well worth seeking out and a terrific look at the once prosperous Italian film industry, which is sadly, a thing of the past.

Released in 2006 by UniVideo with the participation of Rome's Istituto Luce, this English subtitled, all region DVD is still available here.