NICK HOWARD'S ONE AFTER THE OTHER 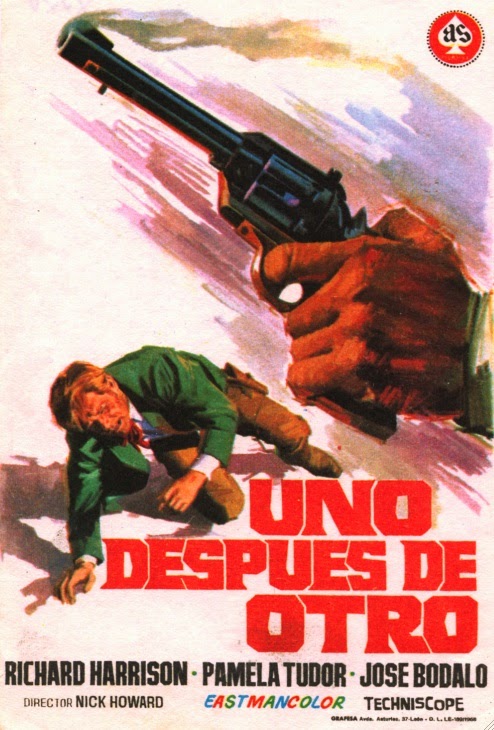 (Errr, what happened to eight?!) This miscounted if nonetheless effective theme song is used very frugally, heard only partially during and then closing the film.

For this 1967 Italian-Spanish coproduction, which was variously announced in the trades under such Anglo shooting titles as THE DAY AFTER TOMORROW and the catchier and more quintessentially “spaghetti”-sounding COFFINS FOR NINE, I’ll begin with a bit of synoptical detail (WARNING! CONTAINS SPOILERS!):- Mr. Jefferson, an aging banker (José Bodalo, best-known within the spagwest genre as lusty revolutionary bandido “General” Hugo in Sergio Corbucci’s DJANGO [1966]), cooperates in the robbery of his own bank in Canyon City, treacherously breaking his prior deal with bandit chief José Espartero (José Manuel Martín). A wary bank clerk, Bill Ross, grabs a rifle and tries to thwart the masked “Mexican” bandits, but Jefferson takes the gun and shoots his own employee in the back, whereupon the bandits - really rogue cattlemen in disguise - are forced to eliminate all other witnesses. For welching on his part of the deal, Jefferson is subsequently injured by a knife-throwing bandit, and the supposed Mexicans are revealed to in actuality be gringos in disguise working for Jefferson. Enter lightning-swift gunslinger Stan Ross (Richard Harrison), who arrives in town to avenge his brother Bill and at the same time find out who is to blame for the bank robbery, which has since been pinned on Espartero. Stan and the fiery bandit leader forge a pact to recover the stolen gold. Discovering that Jefferson and his right-hand man are jointly responsible for both brother Bill’s murder and masterminding the robbery, Stan comes for them. Ambush and counter-attack lead to the razing of Espartero’s camp. Stan is made prisoner and beaten, but feigns death and escapes to plot revenge. One after the other, Stan kills off Jefferson’s nine accomplices then at last faces Jefferson with a single bullet and suffers a knife in his back from the head villain’s wounded yesman, Glen. Jefferson takes the gun and is about to kill Stan, who reaches behind him, pulls the knife from his shoulder and hurls it into the evil banker’s heart.

ONE AFTER THE OTHER ranks as one of director Nick Nostro’s finest western forays (he was credited as “Nick Howard” for the gig, and also directed the first of only two entries in the short-lived Superargo franchise, for which seasoned, super-ripped spaghetti stuntman “Ken Wood”/Giovanni Cianfriglia was briefly elevated to leading man status as the masked and spandex-clad title superhero). Harrison plays a more offbeat role here than he was usually offered, as the well-dressed, smooth-cheeked, bespectacled gunman you better not call “Four-Eyes”. When Sal Borgese lookalike Paolo Gozlino as Bodalo’s fawning flunky is foolish enough to confiscate our hero’s rectangular wire-frame specs, Harrison produces a new pair from a reserve supply stashed inside his coat and proves that an optical handicap don’t detract none from a man’s shootin’. When Gozlino later removes Harrison’s glasses for a second time, he is careful to grind them under his boot (which still doesn’t prevent Harrison from tossing a lighted cigar stump right on the money to ignite a handy barrel of gunpowder). This ‘short-sighted deadeye’ concept is a refreshing change of pace, and might be considered more feasible than a completely sightless shootist (as in Ferdinando Baldi’s BLINDMAN [1971]). This provides food for thought regarding Clint’s famous squint. (Could it be he simply needed a good pair of bifocals...?) And speaking of needing an appointment with the optometrist, following the opening robbery a dozen or more gunmen at close range somehow manage not to even graze - let alone actually kill! - a single fleeing bandit. 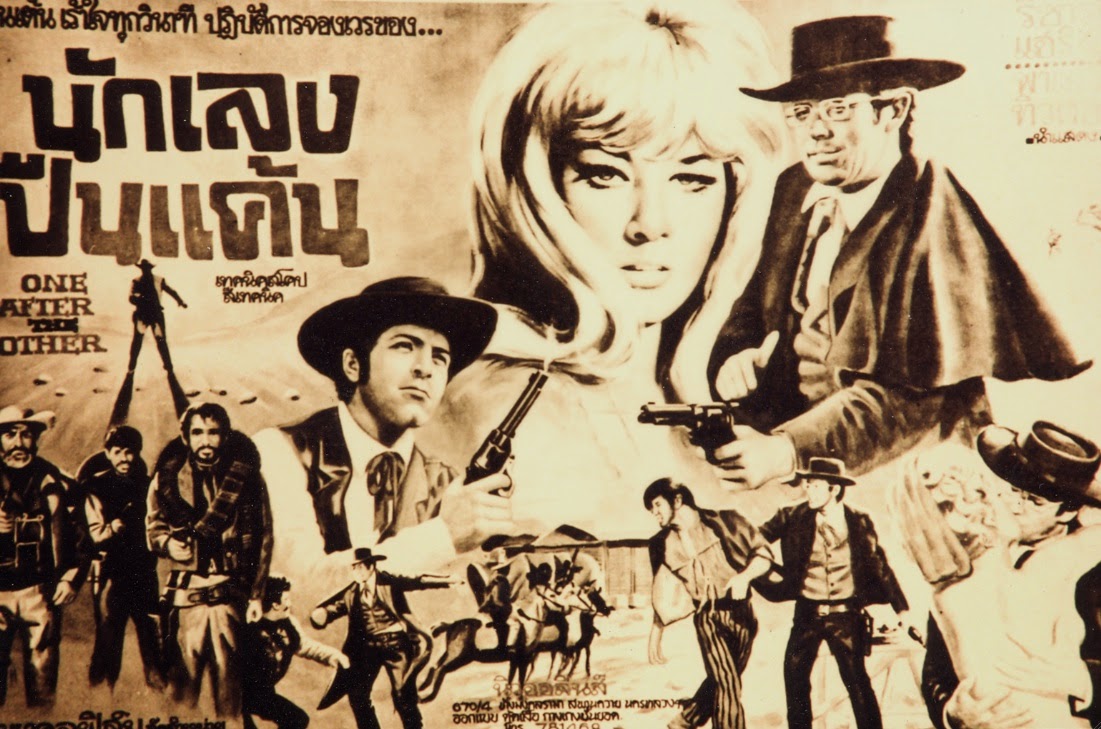 Rather than a liability (as in “Anthony Green”/Mario Sabatini’s execrable THE SHERIFF OF ROCKSPRINGS [1971] and “Hal Brady”/Emilio P. Miraglia’s almost-as-bad-but-not-quite SHOOT JOE, AND SHOOT AGAIN [1972]), Harrison’s minimalist acting style here actually complements his Stan Ross character, whose stilted air invests him with an enigmatic quality, as well as giving him a tougher exterior. When shot, he graphically operates on himself, using his Bowie knife as a scalpel, then biting the head off a bullet and cauterizing the wound with gunpowder. A standard ‘macho’ detail of many a western - spaghetti or otherwise - this self-surgery scene, shot largely in scarlet closeup, would almost certainly have been cut from English-language prints if they exist (the print reviewed here was the ’80s Japanese home videotape version; which as I recall [?] came English-dubbed, with native subs). Other moments of violence, including a pleading woman shot dead at point-blank range, might likewise have been censorable. Most lurid scene comes when a trussed-up man is blasted to pieces by dynamite. An old undertaker wearing a crucifix then appears from out of nowhere. Disgruntled at what little of him is left to bury, he picks up and examines the man’s blown-off lower legs (complete with partial pants and boots!), then tosses them aside in disgust! This scene - played for grim humor - once again reiterates how in the Spaghetti Western cosmos, life isn’t just cheap, it’s pretty much worthless other than as a commodity to be exploited for capital gain (by both a movie’s protagonists and its producers!).

As the pulchritudinous Sabine, true to her cheesecake roots Pamela Tudor (née Green, the famous English glamour model sometimes referred to as “The British Betty Page”) does a sudsy bath scene and tantalizes Harrison with her soap-streaked limbs (she also appeared in Riccardo Freda’s just so-so DEATH AT OWELL ROCK [1967], among others). All niggly nitpicking aside, the present film is a very decent, well-made western. The conclusion in the wind-swept town amid airborne strands of hay is reminiscent of that to Romolo Guerrieri née Romolo Girolami’s slick Gianni Garko faux Django vehicle 10,000 DOLLARS BLOOD MONEY, by way of the one-bullet-in-the-gun idea from Alfonso Balcázar’s lesser-known but solid THREE GUN SHOWDOWN (1968), co-starring the formidable triple threat of George Martin, Gilbert Roland and Jack Elam. 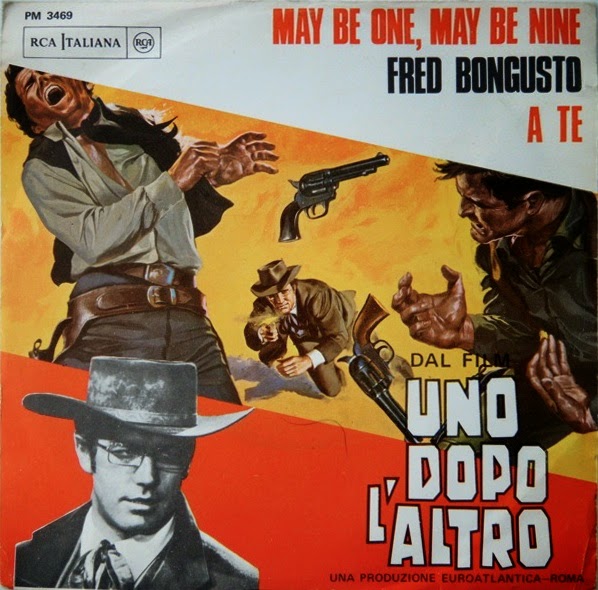 Notes:  Quite inexplicably, one quick selection is heard here from Benedetto Ghiglia’s score for “Vance Lewis”/Luigi Vanzi’s A STRANGER IN TOWN (1966), starring Tony Anthony. Although ONE AFTER THE OTHER’s early German shooting title - 9 Sarge für MacGregor / “9 Coffins for the MacGregors” - name-dropped “Frank G. Field”/Franco Giraldi’s SEVEN GUNS FOR THE MacGREGORS (1966), the finished film was actually released in Germany as still another faux “Django” entry. Attesting to the once-worldwide popularity of spaghetti westerns, it was also released in Japan, and even Thailand. A French photo-comics adaptation, entitled “Adiós caballero,” ran in Ciné-Périodiques of Paris’ Star-Ciné Bravoure magazine (circa the early-’70s). 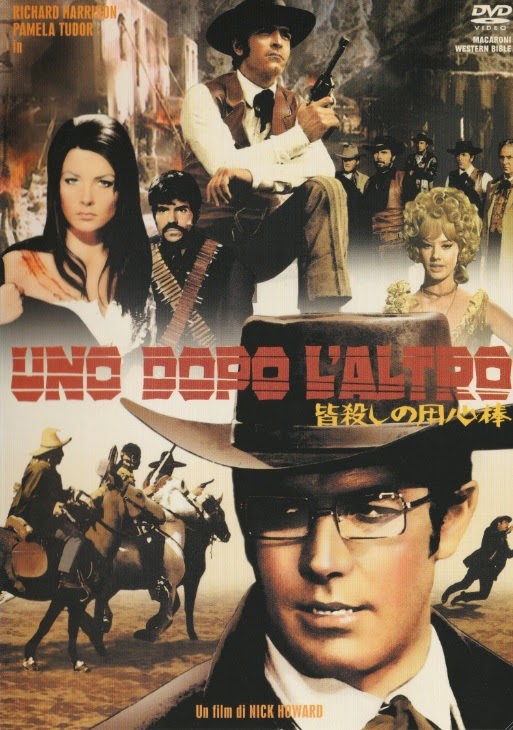 DVD addendum: In April of 2004, this was released in Japan as a Region 2 DVD courtesy of SPO Entertainment as part as their “Macaroni Western Bible” series dedicated to Italian westerns.  It was in English with removable Japanese subtitles, and although presented in its original 2.35:1 aspect ratio, the transfer was not enhanced for 16x9 televisions.  It is now out of print.
Posted by Dennis Capicik at Monday, July 28, 2014