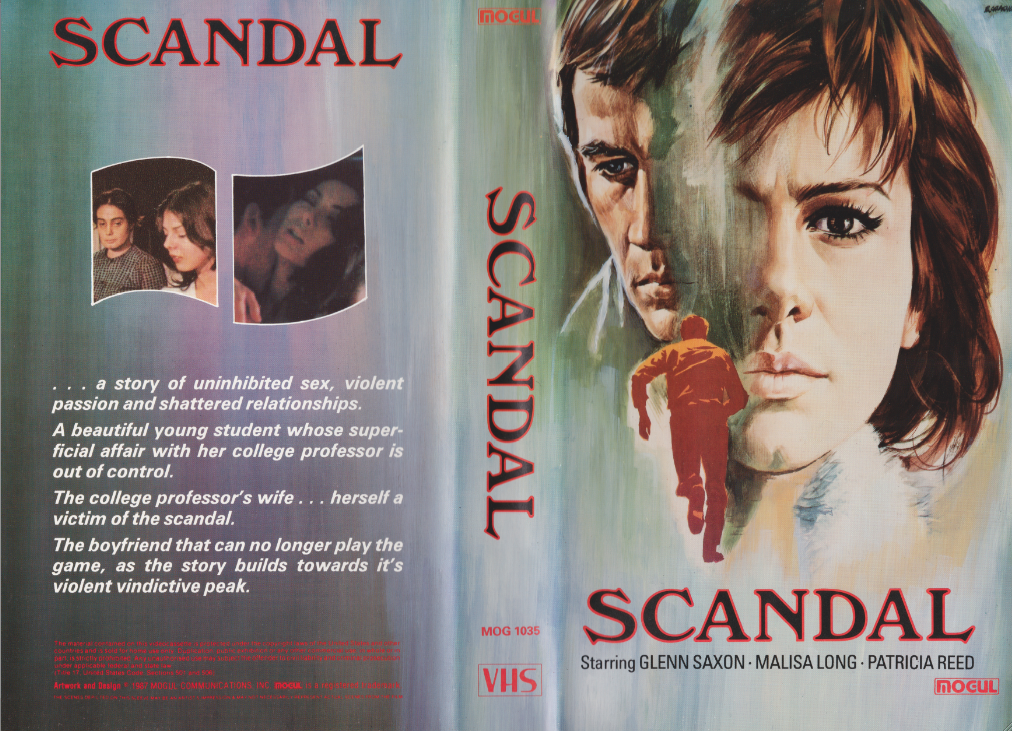 For this installment of our regular VHS column, let’s take a look at Sergio Bergonzelli's SCANDAL (1971), one of Mogul Video's harder-to-find videocassette tapes.

Along with Massimo, Cristiana seems to be the instigator of protests and other acts of “insubordination” on the college campus.  Enter Professor David Andrei played by ex-spaghetti western vet Glenn Saxson, who vows to try and understand this “undisciplined generation”.  Of course, he quickly becomes the talk of the school as Cristiana and her friends lounge around topless, smoke pot and discuss “technicolor trips”.  His refined ex-wife Simona (Patricia Reed) also shows up and joins in on the “counter-culture” movement much to David’s dismay, but he too is having a difficult time controlling his “lust” for Cristiana, which begins to get the better of him during a class field trip.  However, in the hopes of causing a “scandal”, Cristiana and Massimo decide to seduce David and Simona, which is when that the situation escalates for the worse, especially when Cristiana begins falling for David.

Originally released in Italy as IO CRISTIANA, STUDENTESSA DEGLI SCANDALI, this actually received a US theatrical release under the more salacious title of The SCHOOL OF EROTIC ENJOYMENT.  Shot back-to-back with Bergonzelli’s other “Cristiana” film, the marginally better IO CRISTIANA, MONACA INDEMONIATA (also released on VHS by Private Screenings as OUR LADY OF LUST [1972]), SCANDAL is, for the most part, fairly light-hearted stuff highlighted by copious amounts of nudity from most of the female cast.  Granted, it’s all quite tame nowadays, but like many similar Italian films, it veers into darker territory when Massimo’s violent leanings begin to manifest themselves.  During one of the many typical parties that take place, Massimo initiates a game of Russian roulette with David’s eager wife Simona, but when one of the girls at the party decides it’s gone to far, he forces her to play even as she cries and whimpers in utter fear of possibly putting a bullet in her cranium.  Of course, it all turns out to be a game, but the sadistic pleasure he gets from her suffering is merely a taste of what’s to come.  Later, when Cristiana and David decide to runaway together (“I’ve never felt so young…” explains David), Massimo and his buddies corner them in an open field and Cristiana is gang-raped.  It’s certainly a grim conclusion to what is essentially, up to that point at least, a fairly innocuous film.

Almost impossible to find, Mogul Video’s release of this scarce film is a decent print with relatively stable colours, which tend to look a little washed-out at times, but this may in fact be a product of Tonino Maccoppi’s photography, which actually captures the breezy, seaside town of Ostia (where the film was shot) just outside of Rome quite perfectly.
Posted by Dennis Capicik at Tuesday, July 15, 2014