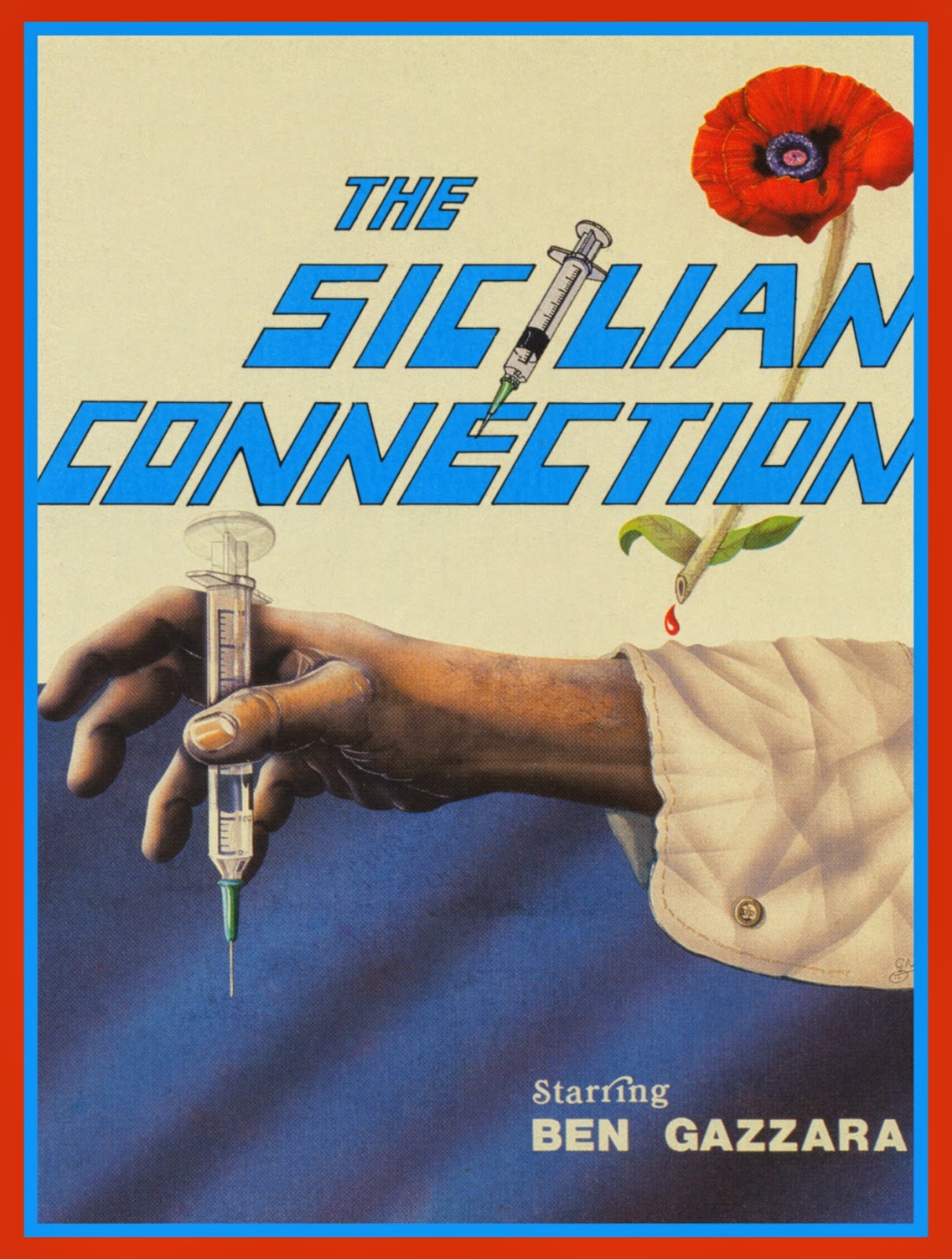 The below review was written following a joint screening of Video Toemi’s widescreen (2.35:1), English-dubbed Japanese VHS tape (complete with native subs), and Top Video’s Canadian full-frame / pan-and-scan VHS; both of which were released as The SICILIAN CONNECTION circa the mid/late ‘80s.

Export ad-line: ‘From the Poppy Fields in Turkey to the Sidewalks of New York… through the crossroad arteries of Death and Drugs.’

Corrado Gaipa, as drug lord, discusses the value of heroin: “What a fortune.  MILLIONS… However, it could all blow away in a puff of wind!”

Known in Italy as AFYON-OPPIO (1972), The SICILIAN CONNECTION was originally (1971) planned as a Duilio Film production (under screenwriter Duilio Coletti), and shooting was due to commence in Turkey as of October ’71; when this start date was missed, signed star Gazzara returned to Hollywood pending possible litigation for breach of contract.  At another point (7/72), the film was scheduled for shooting on location in Iran; with Gazzara, Telly Savalas, Lionel Stander, Renato Salvatori and Nathalie Delon than all hoped for the cast.  It was at one time also considered as a coproduction with West Germany, with location shooting scheduled for Hamburg.  Of all those mentioned actors’ names, only Gazzara’s made it into the final credits.

A dynamite opening scene kicks-off this worthy gangster effort.  A solemn funeral procession: mob-affiliated pallbearers carrying a casket containing the late Don Francesco Vascello.  When interrupted by the police, head ‘mourner’ Don Vincenzo permits an impromptu inspection of the coffin’s contents; whereupon the corpse’s crudely-stitched chest cavity is found to be stuffed with packets of morphine smuggled into Sicily from Istanbul.  The snoopy cop pays for his curiosity dearly when he is promptly sealed inside the coffin by mobsters and buried alive!

Via Istanbul, wannabe dope baron Giuseppe “Joe” Coppola (Gazzara, whose dubbed voice is not his own) arrives in the Afyonkarahisar region of Turkey to arrange a mega drug deal.  To the strains of the de Angelis brothers’ engaging funk rock score, Coppola hooks up with a smoky call-girl named Claude (Silvia Monti), and attempts to purchase 50 kilos of morphine-based opium from a Turkish-based American connection. 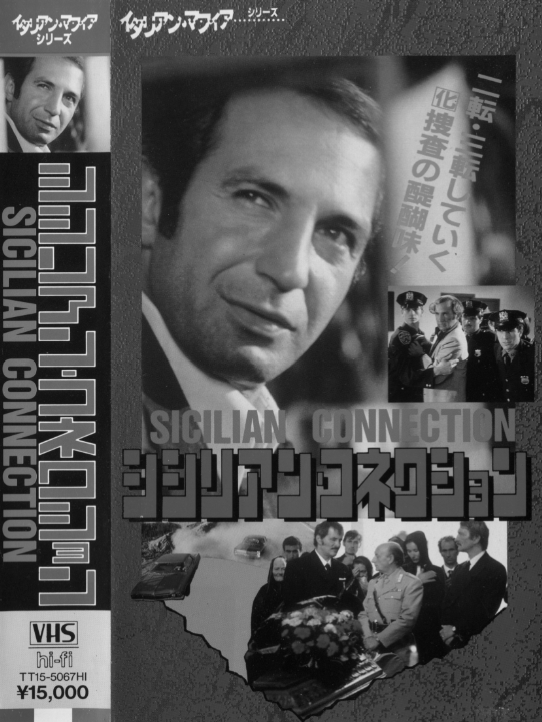 The SICILIAN CONNECTION’s early portion allows some documentary-style peeks into the opium trade of rural Turkey (“You coulda gone to Thailand.  Better prices!” someone belatedly suggests).  The poppy plantation owner demands a quarter-cut of any smack refined from the raw opium (“Here we have snow that is purer than any that has ever fallen on the mountains of the world.  Purer than a virgin’s tears!”).  Other branches of the international drug cartel also demand generous shares, leaving Coppola with a mere pittance for his troubles.


When Coppola leaves their jurisdiction homeward bound for Italy the old country, the Turkish cops are simply relieved: now he’s the polizia’s problem, not theirs!  Scene again shifts to Sicily.  An amusing subsequent scene shows Coppola’s sedan entering a car wash painted all black, then – DIABOLIK-style – emerging on the other side scrubbed a spotless white!  The Sicilian Connection receives Coppola with unveiled distrust, but he is soon accepted by the powerful Don Calogero (genre regular Corrado Gaipa, seen as Don Tommasino in the “other” Coppola’s The GODFATHER that same year).  Following some erotic close-ups of women’s mouths gobbling whipped cream – as in many Italo films, the eating ritual is a recurrent motif here – Coppola gets to boink (albeit off-screen) both of the don’s sexually precocious daughters (Rosalia is played by the smoky Malisa Longo).

Coppola gets in good with the Sicilian syndicate after he helps fend off a bandit attack on Gaipa’s drug refinery (raw opium arrives in Palermo packed inside frozen fish).  A breach in etiquette between the Marseilles mob and the Sicilians results in the French Connection being methodically eliminated at a posh Italian restaurant.  As the short-lived “Frenchy” – though oddly named Albertini, possibly a Corsican? – Carlo Gaddi plays a culinary snob who demands a gourmet French sauce along with his partridge.  Unamused, the Italians promptly turn him into lasagna oozing special sauce (i.e., tomato purée) of a more zesty italiano flavour.

The New York City wing of the syndicate anticipates arrival of the dope (transported inside a waterproof canister welded beneath the hull of a cargo ship named La Traviata [presumably after Verdi’s opera], of all things). Having ingratiated himself with the Mafia’s Palermo wing, Coppola – hungry for a bigger slice of the “pie” – offends the NYC connection when he intercepts the shipment first.  But the long arm of the godfather does not let go easily, and Coppola finds himself fighting for his severely devalued life (“You’re an empty six-pack o’ beer!”). 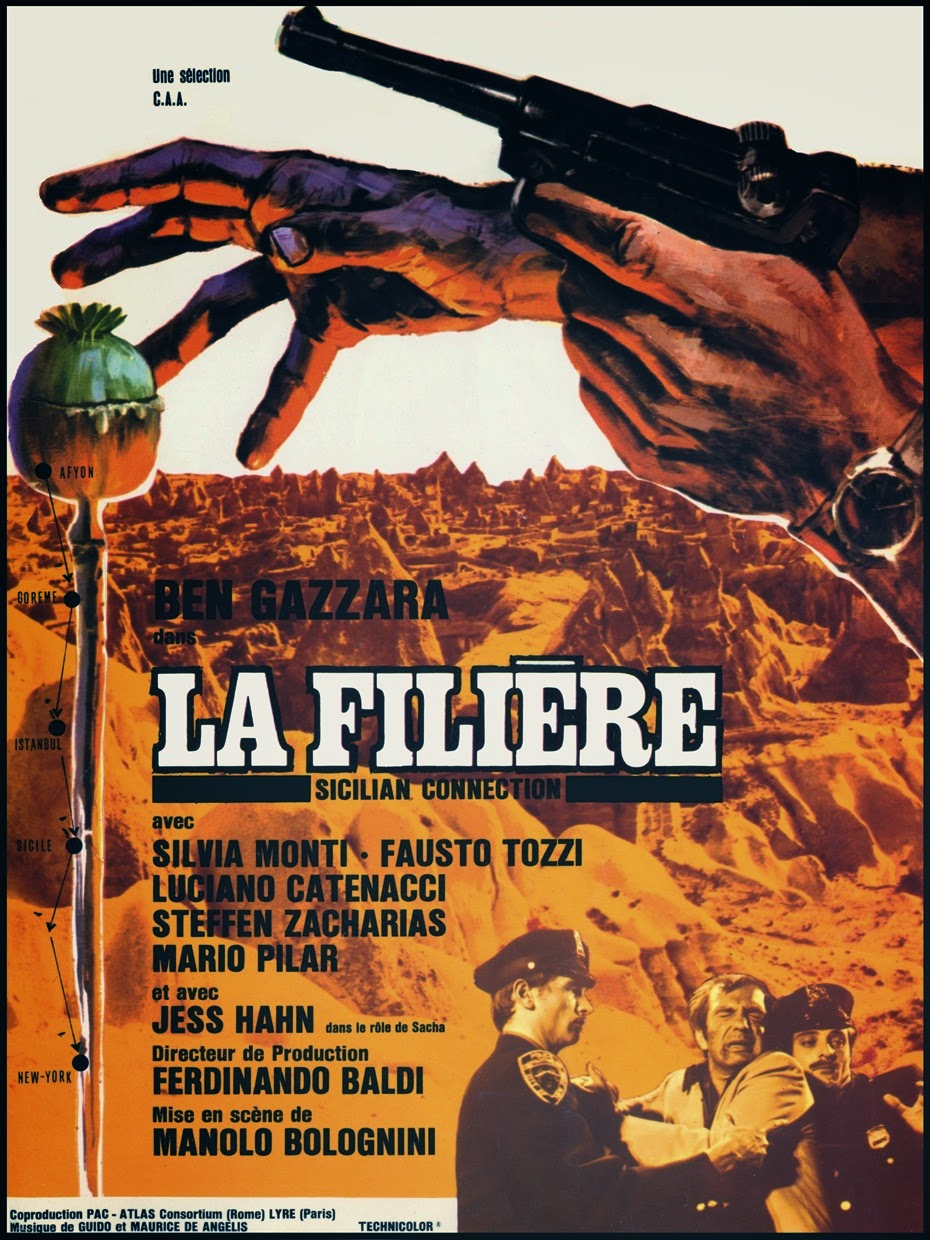 The SICILIAN CONNECTION occasionally waxes on the philosophical side, accenting verbal drama over physical action, but the plot – which ends with a passable bang – is thoroughly engaging, and the dubbing more than coherent enough to sustain viewer interest throughout.  An unanticipated double-whammee ending takes you completely off-guard.  You’ll be getting no spoilers from me (not this time, anyway), so by all means give this a gander.

Here playing an American of Sicilian lineage, Gazzara later starred as a full-blooded Siciliano in Giuseppe Tornatore’s excellent epic gangster drama, IL CAMORRISTA (1985), which was released in Italy as both a miniseries on TV and as a shortened – if still lengthy – theatrical feature.

Notes: Approximately ten minutes of footage from The SICILIAN CONNECTION was ‘subtly recycled’ (note quotes!) in a subsequent PAC (Produzioni Atlas Consorziate) release, Alfonso Brescia’s cheapo-but-fun The NEW GODFATHERS (1979).  The present film was given a US theatrical release by Joseph Green Pictures, who also released Luciano Ercoli’s above-par crime drama La POLIZIA HA LE MANI LEGATE / “The Police have Their Hands Tied” (1975) Stateside under the rather generic – not to mention misleading – title of KILLER COP (1975).