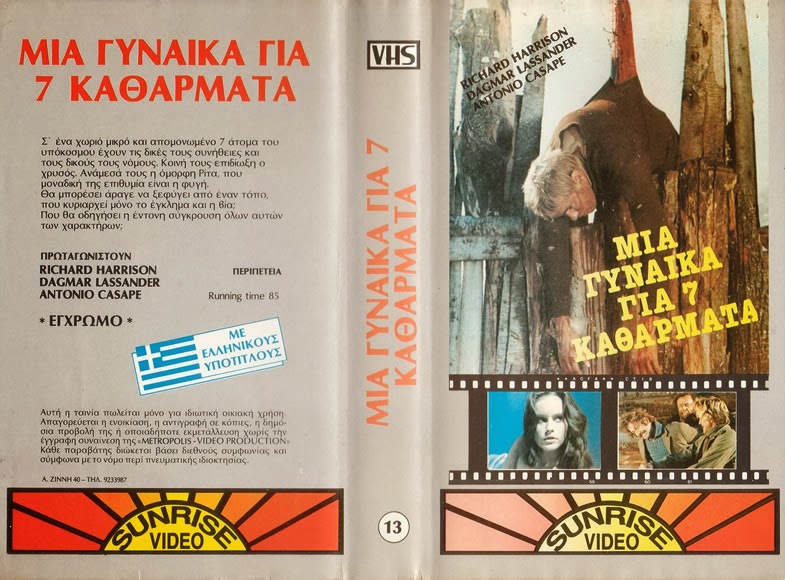 Welcome once again to the long, lost world of VHS tapes.  For this fifth installment, it’s my pleasure to welcome on board Mr. Steve Fenton, the incredibly prolific writer, publisher and all-around good guy who, after a rather long sabbatical, has been keeping busy writing once gain.  Keep your eyes peeled for his work in the latest issues of Cinema Sewer, Weng’s Chop and the newly resurrected Monster International.  So, let’s globetrot a little and travel to both Venezuela and Greece as he checks out Roberto B. Montero’s sleazy 1973 effort The SEWER RATS.

Mitchell, as Gordon: “There’s an old rule among thieves, Dick: ‘Never rob one another.’ Or didn’t ya know that, wise-guy?!”

So far as I can deduce, THE SEWER RATS never secured any sort of Canadian or US theatrical release — if it ever did, it would have to be only at the sleaziest of fleapit urban grindhouses, probably at the bottom of discount “3-for-1” multi-bills — but under that rather catchy Anglo export title, back in the ’80s this was released in English-dubbed, Spanish-subbed form onto grey-market (“bootleg”) Venezuelan VHS cassette, which was alternately titled in Spanish as UNA MUJER PARA SIETE MACHOS (loosely translated, “A Woman for Seven Tough Guys”).*

Based on a story idea by star Richard Harrison, this exceedingly grubby and modest (okay, minor) offbeat crime melodrama was heavily influenced by Spaghetti Westerns; as might well be expected due to its two leading men and the time during which it was made (i.e., toward the tail-end of the SW craze, which lasted for a good decade at least, but by then was very much on its last legs). Both Harrison and Mitchell had long earned their bread and butter in the spaghetti west, so who can blame them for trying to milk the market for all it was worth; which by this time often wasn’t much, but you takes what you can get…

Perhaps not boding too well for the present film, the very first word heard coming out of Harrison’s mouth is “Shit!” Wearing an unflattering Andy Capp hat, he is first seen driving a psychedelic VW Beetle and spends the duration of the film limping about on a crutch (which sometimes serves double-duty as a defensive / offensive weapon). No sooner has his Bug conked-out at the side of a lonely rural dirt-track somewhere in the ass-end of beyond and he attempts to thumb a lift, than Harrison — whose typical onscreen characters were by this point in the actor’s career well used to such unexpected vicissitudes of fate — is forced to dodge an oncoming speeding truck. A short time later, his search for a mechanic leads him to a dilapidated huddle of wooden hovels resembling some alternate reality western ghost town. At the local saloon, Harrison learns that the big cheese in this motley cluster of (quote) “pigsty shacks” is Karl (Nino Casale) — the very same guy who had recently tried turning him into roadkill, apparently for more than just cheap kicks. In this here no-horse town, not only does the surly, misanthropic Karl own the sole motorized vehicle to be had, but pretty well everything else besides; including all the available beer and whiskey, as well as even the only woman in the whole territory, namely Rita (the frequently semi-nude Dagmar Lassander [“You’re nuthin’ but a goddamn whore!”]). For all of Karl’s bastardly bluster however, the real top honcho is actually Gordon (Mitchell), who suspects that Harrison might be an undercover cop sent to case the joint in advance of a bust. Unbeknownst to most of the five other male residents of this outcast community, Gordon and Karl have been hoarding a sizeable fortune in gold excavated from a nearby mine by a crotchety old prospector. To protect their secret, the crooks have already murdered one intruder and buried him in the woods in a shallow grave. Having unflatteringly christened their game-legged unwanted guest “Cripple,” Gordon and Karl don’t take kindly to all Harrison’s officious snooping around. Both the gold and the corpse soon turn up missing (oxymoron alert!), prompting Gordon and Karl to begin covering their tracks by eliminating all the opposition. Big non-surprise here is that the guy from the grave was none other than Harrison’s brother Frank, who was murdered by the odious Karl. 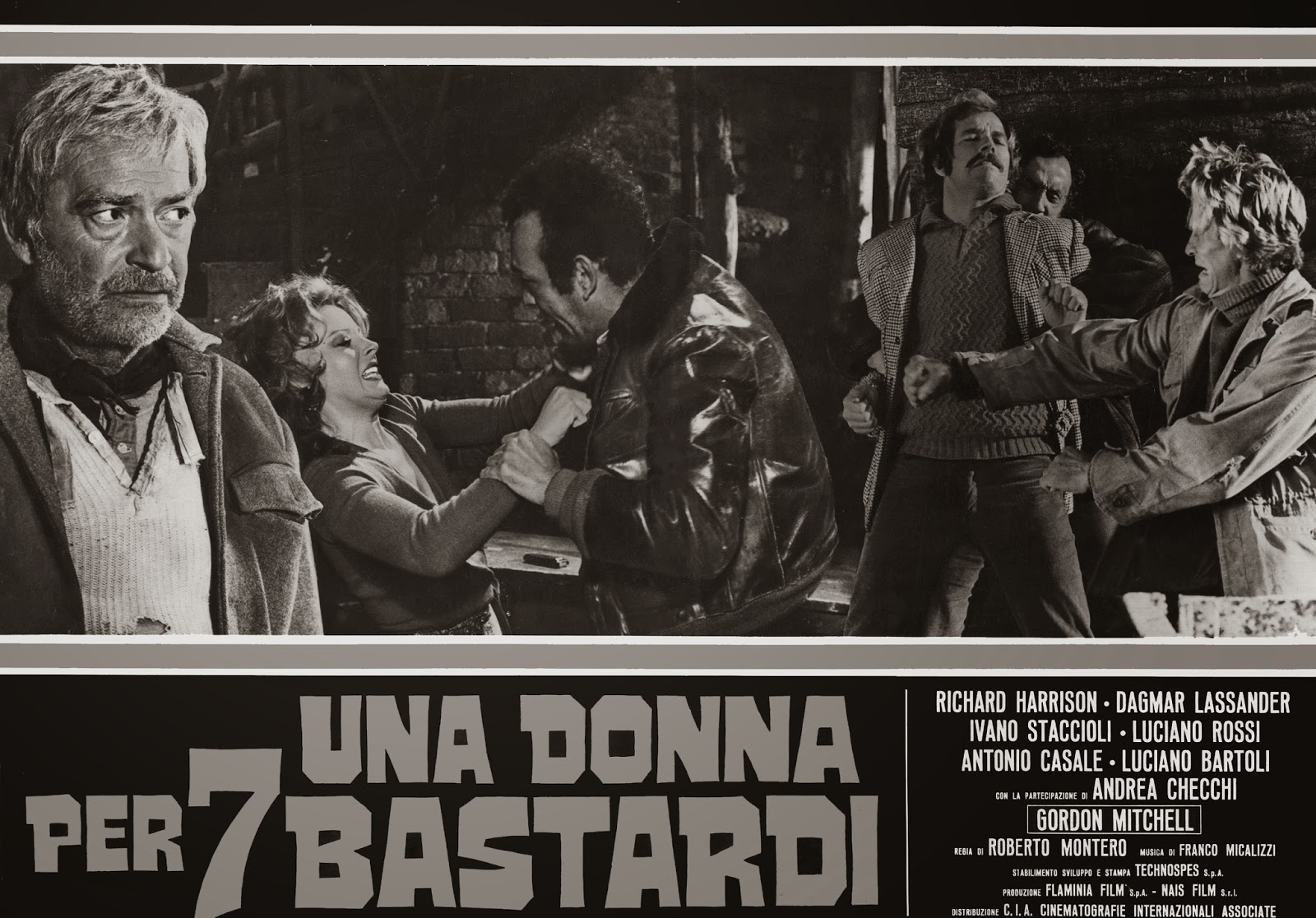 While obviously shot entirely in Italy — at Mitchell’s self-built-and-owned Cave Film Studios (seen in umpteen “Miles Deem”/Demofilo Fidani spagwests) — THE SEWER RATS is laid in a generic, indeterminate geographical locale that could be just about anywhere. Disorientation is increased by the nondescript accents of voice actors used in the dubbing process (neither Harrison nor Mitchell bothered sticking around to post-synch their own lines). The usually dependable Franco Micalizzi’s score is bland and repetitive — the same two-minute phrase is replayed ad nauseam — and his work here falls well below the standard of his later energetic compositions for several key Umberto Lenzi crimeslimers.

When they’ve got nothing better to do — which is often in this threadbare scenario — locals get their jollies by tormenting a peeping tom / simpleton / deaf-mute / hunchbacked harmonica player nicknamed “Idiot” (crimeslime icon Luciano Rossi, with a pillow stuffed up the back of his jacket [!?]). You know you’re scraping the absolute barrel-bottom of human mean-spiritedness when typecast lowlife Luciano Rossi is playing a film’s most sympathetic character!

Just for a ‘subtle’ product placement, Lassander fends off a would-be rapist with a broken J&B bottle (“Get out, you goddamn pig!”), and enjoys exploiting all the volcanic sexual tension her proximity foments amongst the frustrated menfolk (“You’d sell yer mothers for a quick lay. Assholes!”). Although everybody else in town has got the uncontrollable hots for her (“It’s not my fault that men have a desire for me...”), it’s all Lassander can do just to attract Harrison’s attention, let alone get him to actually put the blocks to her. It takes several teasy glimpses of her thighs and a flash of her tits before we come to the distinct conclusion that it’s more than just Harrison’s leg that requires a crutch (“You some kinda queer?!”).

Most of the crimes depicted in THE SEWER RATS are of the — ahem — sexual variety. For instance, Rossi’s voyeurism and Casale’s extended abuse / rape of Lassander; which he ‘consummates’ while grunting like a hog after first slapping her senseless then ripping off her panties (hey, I don’t write ’em, I just report ’em, okay!). Other violence generally utilizes standard punch-up choreography which would still have been fresh in the two American stars’ memories from their western heydays. Other action involves a switchblade in the throat and a pitchfork to the midriff. Completely going against the usual grain for shootemups despite the SW comparison I made above, not one firearm is seen during the entire running time. The film ends as indifferently as it began, with Harrison killing-off the Mitchell and Casale characters, then casually driving away with the mortally wounded Lassander grudgingly in tow, like she’s unwanted baggage he’d gladly dump off by the roadside at his first opportunity.

Italo action fans could do quite a bit worse, but this one’s definitely only for those who are easily — very easily — amused. I suppose you can consider that some kind of recommendation, however backhanded it might sound. But it’s the best I can do, I’m afraid.

*This very same English dubbed print subsequently turned up in Greece on PAL videotape courtesy of Sunrise Video, although this time with much better picture quality and Greek subtitles.
Posted by Dennis Capicik at Tuesday, March 11, 2014