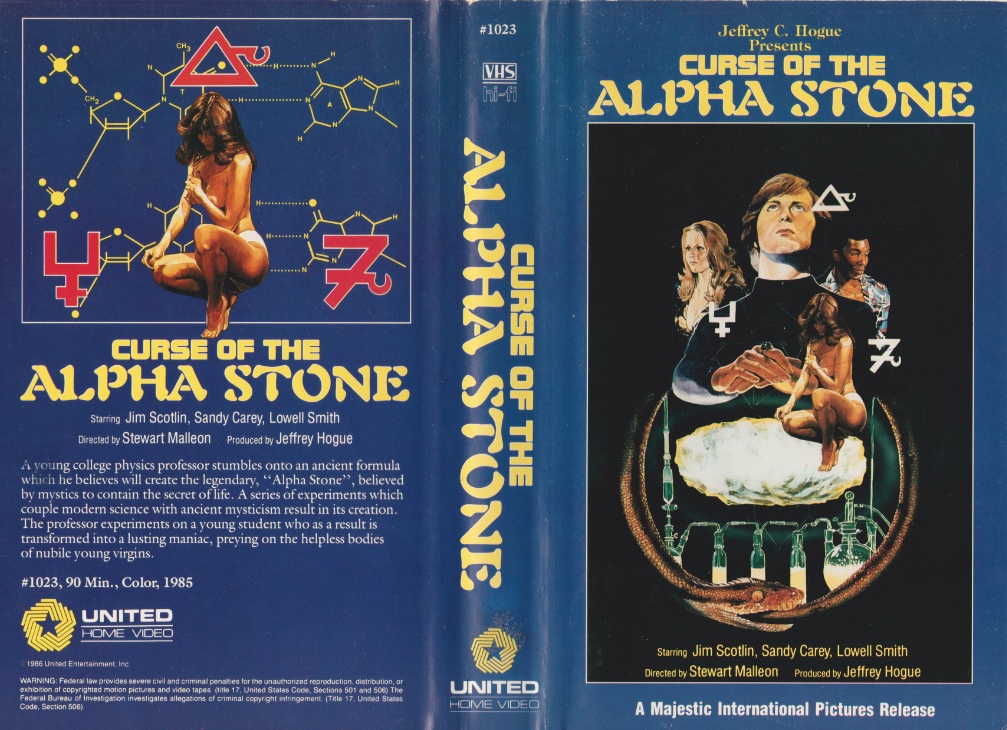 This will be a regular feature looking at long, lost VHS tapes.  Let’s start with a real doozy, United Home Video’s The CURSE OF THE ALPHA STONE (1972).  Here is the synopsis from the VHS (Catalogue #1023) released in 1986:

“A young college professor stumbles onto an ancient formula which he believes will create the legendary, “Alpha Stone”, believed by mystics to contain the secret of life.  A series of experiments which couple modern science with ancient mysticism result in its creation.  The professor experiments on a young student who as a result is transformed into a lusting maniac, preying on the helpless bodies of nubile young virgins.”

That’s pretty much the general plot of this loopy sexploitation effort from director Stewart Malleon who, according to my research, hasn’t done much else.  What the back of United Home Video’s VHS tape neglects to mention is just how bizarre the film truly is.

Jim Scotlin is Abe Adams, the genius professor/alchemist who manages to extract the secret of the Alpha Stone (basically a yellow glowing rock), which he creates in his homemade laboratory.  Although it may contain “the secret of life”, he decides to utilize its supposedly infinite power and get laid instead, which appears to be his sole motivation.  Whether this is a side effect or his primary goal is never made clear, but it’s quite obvious that he or anyone else that comes in contact with it begins to suffer from an overactive libido.  When he initially uses a young gay man as a test subject, the power of the Alpha Stone not only turns him into a serial rapist, but also turns him “straight” as well!  Then, in another scene, Abe’s maid is suddenly attracted to her vacuum cleaner, while a multitude of women from the college campus pass through Abe’s bedroom including sexploitation starlet Sandy Carey.  Of course, it all goes horribly wrong during the abrupt ending when Abe’s overgrown member proves to be too much for one of the women.

Although filmed in 1972, this apparently never played theatrically and only surfaced on VHS when home video entrepreneur Jeff Hogue released this through United Home Video as part of a “9 film package for United Entertainment” which also included William Girdler’s ASYLUM OF SATAN (1972) and Pat Patterson’s DR. GORE (1973).  Check out John Wooley’s excellent interview (“The wild, wild world of exploitation”) with Hogue in Fangoria #61 for more on this low-budget distributor.

Not easy to find, Something Weird Video also released this on DVD-R, but this is also out of print, so check Ebay or Amazon.