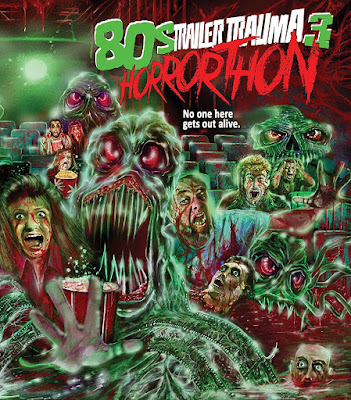 Most recent trailer compilations tend to focus much of their attention on material from the ’60s or ’70s, which always featured trailers containing plenty of ballyhoo, but for TRAILER TRAUMA 3, those mad folks over at Garagehouse Pictures have zeroed-in on the ’80s instead, in what is, quite possibly, one of the lo-o-ongest trailer compilations ever put together: running at just under seven-and-a-half hours in length!  Spread over two Blu-rays, there are over 250 trailers in this colossal undertaking, so let’s take a look at the some of the highlights, of which there are plenty.

Beginning with 1980 and compiled chronologically, Lewis Teague’s giant animal attack film, ALLIGATOR, gets things rolling, and then it swiftly delves into the deeper recesses of Ken Russell’s ALTERED STATES.  Moving right along, we get the familiar if much-beloved Burt Young-narrated trailer for Jeffrey Bloom’s BLOOD BEACH (where is that Blu-ray?!), which is immediately followed by Ulli Lommel’s THE BOOGEYMAN and a couple of “Don’t” titles – Robert Hammer’s sleazy DON’T ANSWER THE PHONE (recently released by Vinegar Syndrome in a brand new 4K restoration) and Joseph Ellison’s unflinching DON’T GO IN THE HOUSE (“His suffering has ended! And ours is about to begin!”).  A rarely seen – and very cool – teaser for Brian De Palma’s DRESSED TO KILL, follows and then it’s off to the movies with Vernon Zimmerman’s FADE TO BLACK (“Eric Binford lives for the movies.  Sometimes, he kills for them too!”), which also desperately needs a new, updated disc release.  Then, John Carpenter’s THE FOG (“It is night. It is cold. It is coming!”) rolls into town, along with the now-almost-legendary ‘countdown’ trailer for Sean S. Cunningham’s game-changer FRIDAY THE 13TH, which is then followed by the U.S. trailer for Joe D’Amato’s THE GRIM REAPER (“A flash of steel! An unearthly shriek! An icy breath!”).  An effective trailer for Armand Mastroianni’s HE KNOWS YOU’RE ALONE – which also needs a Blu-ray – continues the focus on slasher films, a genre which is highly prevalent throughout the entire disc; but then, a beautifully-structured Spanish trailer for Dario Argento’s INFERNO pops out of nowhere to really mix things up.  More slashers continue with William Lustig’s MANIAC; Emmett Alston’s NEW YEAR’S EVIL; Paul Lynch’s PROM NIGHT and Denny Harris’ SILENT SCREAM, which are followed by a few monster-themed trailers for William Malone’s SCARED TO DEATH (“Thank God, it’s only a movie!”), Peter Foleg’s The UNSEEN (“For too long, it has been hiding!”) and Greydon Clark’s all-star alien monster-romp WITHOUT WARNING.

Continuing on with 1981, first we get a rare trailer for John Landis’ extraordinary AN AMERICAN WEREWOLF IN LONDON, and then James L. Conway’s subterranean creature feature THE BOOGENS scurries onto the screen.  As expected, after the financial success of FRIDAY THE 13TH, slasher films dominated theatre screens in ’81, and there’s plenty of continued representation here, with Tony Maylam’s THE BURNING, Jimmy Huston’s FINAL EXAM, Steve Miner’s superior FRIDAY THE 13TH PART 2 (“The body count continues!”), Herb Freed’s GRADUATION DAY, J. Lee Thompson’s Canadian-lensed HAPPY BIRTHDAY TO ME, Tom DeSimone’s HELL NIGHT, Jeff Lieberman’s slick JUST BEFORE DAWN, George Mihalka’s exceptional MY BLOODY VALENTINE, in a rare uncut trailer, no less; and Mickey Rose’s and Michael Ritchie’s slasher spoof STUDENT BODIES (“Helloooo, it’s me, the heavy breather from every horror film you’ve ever seen!”), which failed to materialize on Olive Films’ Blu-ray.  Of course, other highlights for 1981 include a terrific, Percy Rodriguez-narrated trailer for Wes Craven’s DEADLY BLESSING; Gary Sherman’s DEAD AND BURIED; the U.S. trailer for Lucio Fulci’s THE HOUSE BY THE CEMETERY (“In this house, what you don’t know will hurt you!”) narrated by Brother Theodore; Howard R. Cohen’s monster spoof SATURDAY THE 14TH, and an outstanding trailer for David Cronenberg’s SCANNERS.

Disc two begins with 1982, and runs all the way through 1989 – again in chronological order.  Things start off with a memorable trailer for Jack Sholder’s ALONE IN THE DARK ([1982] “Anything can happen when you’re alone in the dark!”); Damiano Damiani’s superior sequel AMITYVILLE II: THE POSSESSION (1982), Paul Schrader’s effective remake CAT PEOPLE (1982), and John Wintergate’s completely loopy BOARDING HOUSE ([1982], “In Horror Vision!  Forget 3-D and experience a new dimension in screen terror!”).  And speaking of 3-D, it too is well represented throughout the disc, with trailers for Steve Miner’s FRIDAY THE 13TH PART III 3-D (1982), Richard Fleischer’s less-than-stellar AMITYVILLE 3-D ([1983] “As the horror reaches out beyond the edge of the screen!”) and Joe Alves’ embarrassing JAWS 3-D (1983).  Of course, slasher fans still get plenty of treats, with Paul Lynch’s HUMONGOUS ([1982] “6 people stranded, hunted…”), Joe Giannone’s MADMAN (1982), Stephen Carpenter’s and Jeffrey Obrow’s PRANKS ([1982] a.k.a. THE DORM THAT DRIPPED BLOOD), J.S. Cardone’s THE SLAYER ([1982] “What you’re about to see may shock you!”), Amy Jones’ THE SLUMBER PARTY MASSACRE (1982), Richard Ciupka’s CURTAINS (1983), Andrew Davis’ THE FINAL TERROR (1983), Buddy Cooper’s gory THE MUTILATOR (1984) and Fred Walton’s rather-too-underappreciated spoof, APRIL FOOL’S DAY (1986).

Being an ’80s trailer compilation, many of the popular horror ‘franchises’ are also well-represented, including the rest of the FRIDAY THE 13TH films, from Joseph Zito’s FRIDAY THE 13TH PART IV: THE FINAL CHAPTER (1984) all the way through to Rob Hedden’s execrable FRIDAY THE 13TH PART VIII: JASON TAKES MANHATTAN (1989).  Other ‘franchises’ include the first four NIGHTMARE ON ELM STREET films; the entire ’80s HALLOWEEN output, from Rick Rosenthal’s HALLOWEEN II (1981) to Dominque Othenin-Girard’s HALLOWEEN 5: THE REVENGE OF MICHAEL MYERS (1989), and all three POLTERGEIST films are just a few of the highlights.

As you would expect, there are also plenty of rarities that pop up, including a preview for Roger Christian’s THE SENDER (1982), which failed to appear on Olive Films’ Blu-ray; a wonderfully creepy trailer for Avery Crounse’s EYES OF FIRE ([1983] “The secret is sleeping in the trees.”), a cult favorite which still remains stubbornly unavailable on disc; then it’s back to the swamps of Arkansas for Charles B. Pierce’s woeful follow-up to THE LEGEND OF BOGGY CREEK (1972), BOGGY CREEK II: THE LEGEND CONTINUES… (1984); John N. Carter’s thoroughly zombieless  ZOMBIE ISLAND MASSACRE ([1984] “Welcome to beautiful Zombie Island!”), and then an excellent prerelease trailer for Jim Wynorski’s KILLBOTS (1986), which was eventually recut and released as CHOPPING MALL.

Of course, attempting to watch this entire collection in one marathon sitting would be quite a very formidable task indeed, especially if you consider the wealth of information to be gleaned from the superb – and very entertaining – commentary tracks, which are recorded by various film personalities and historians.  For the record, 1980 contains a fast-paced, fact-filled commentary courtesy of Exhumed Films’ Dan Fraga, Harry Guerro and Jesse Nelson; 1981 is covered by Temple of Schlock’s Chris Poggiali, who also reveals a number of interesting factoids, including many of the film’s tie-in paperback novels; filmmaker Ted Geoghegan (of WE ARE STILL HERE [2015] fame) covers 1982, while Michael Gingold of Rue Morgue magazine and Tim Ferrante unveil more interesting tidbits for 1983 and 1984, respectively.  Grady Hendrix, author of MY BEST FRIEND’S EXORCISM, provides plenty of laughs for his look at 1985, and this is, quite possibly, the liveliest track; horror artist Stephen Romano gives us his thoughts on 1986 and 1987, and even provided the disc’s striking cover art too; DJ Dan Buskirk and James Harris of Doc Terror finish things off with 1988 and 1989, respectively.  All of the audio commentaries are well-worth-listening-to, as each participant offers their various opinions and assorted bits of trivia with an enthusiasm that’s both highly contagious and extremely entertaining.  Other extras include trailers for Garagehouse Pictures’ first two TT discs, Paul Kyriazi’s NINJA BUSTERS (1984) and Zoltan G. Spencer’s THE SATANIST (1968), while the menu promises yet another tantalizing volume in the TT series – TRAILER TRAUMA IV: TELEVISION TRAUMA!!!

Mastered in 4K from original 35mm elements, most of the trailers have, as you’d expect, the usual scratches and some minor print damage here and there, but ALL of them look absolutely fantastic on Blu-ray, and it only makes one wish some of the actual films themselves that are previewed within this collection were available in HD.  As with their other must-have TRAILER TRAUMA discs, Garagehouse Pictures have outdone themselves yet again with this third instalment, so it goes without saying that this is another MUST-purchase!  Order it from DiabolikDVD today!  It’s essential.
Posted by Dennis Capicik at Friday, February 03, 2017