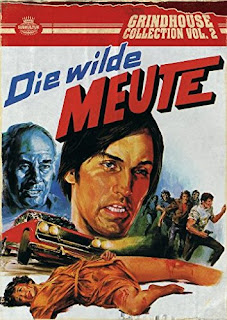 Reviewed by Steve Fenton with additional comments from Dennis Capicik.

US video blurbs: “Four ruthless, sadistic young hoodlums, looking for the fastest route to easy street, embark on a violent and bloody path that points straight to oblivion... Rape, harassment, and terrorism are ‘easy’ crimes to master; they’re great for kicks, but not for cash... The big dollars are in major league crime: extortion, armed robbery, and murder...”

Under the title SEASON FOR ASSASSINS, this film was formerly (circa the 1980s) extant on domestic North American Betamax/VHS videocassettes from both Unicorn and USA Home Video.

What we’ve got here is an oddball mishmash of a film, simultaneously ambitious and amateurish, which content-wise is much in the vein of Romolo Guerrieri’s rogue-youths-on-a-rampage action drama, YOUNG, VIOLENT, DANGEROUS (1976).

In Rome, Piero Giarranaldi (whose last name was shortened to “Naldi” on Anglo prints; Joe Dallesandro) and his three buddies are reckless street punks who enjoy joyriding through rush hour traffic. They recklessly endanger the life of an innocent moped rider, treat other cars like dodgems for their amusement and jeopardize pedestrians, all in the name of cheap kicks. For dirty cash, Piero and his boys run minor break-and-enter scams for an underworld fence named Mr. Poggi (Settimio Segnatelli), who promises the gang (“They were born small, and they’re gonna stay small!”) their shot at the big leagues any day now. Their long-awaited “big job” arrives in the form of a stocks-and-cash heist at a jewelry store. While Poggi has given explicit instructions that there should be no gunplay involved on the robbers’ part, the panicked proprietor shoots one of the gang instead, resulting in a massed police manhunt...

Dallesandro – whose famous “Joe” tattoo is plainly visible here, despite his onscreen character’s different first name – looks much as he did in his notorious Warhol films, and is dubbed by a different actor (a blessing, considering his severely limited emotive range). Joe’s lawless Piero character’s father is institutionalized. He neglects his older live-in girlfriend, a streetwalker named Romana (Magali Noël [“I make good money behind the bushes!”]; IMDb gives her character name as “Rossana”), who in turn neglects their unwanted, illegitimate infant child. Piero’s other roommate is a weird monk, Father Eugenio (Rossano Brazzi [“My parish is in the streets!”]), who openly ogles pin-ups of naked women and is frowned upon by Vatican II (Monsignor: “Cultivating a gang of infamous delinquents is hardly a Christian act!”). After one of his criminal subordinates beats-up and robs Fr. Eugenio, Dallesandro threatens to cut the perp’s head off with a circular table saw!

Playing vigilante Commissioner Quattroni (whose name the IMDb gives as “Katroni”), name-brand Yank guest star Martin Balsam’s sudden outburst of ‘police brutality’ is poorly motivated and even more poorly staged. Brazzi’s cassocked cleric is on hand to torment Balsam’s nonexistent conscience (“Take that gun and kill off all that crap in the name of the law!”). For the messy finale, Joe is cornered by Balsam after he makes his break in a Ford Capri rally car.

Co-written by sleazy-cheapie spezialista Piero Regnoli – whose name attached to it should clue you in to the film’s humble origins – the script also dwells on Joe’s burgeoning relationship with virginal nice girl Sandra (Cinzia Mambretti, in a part originally proposed for Marina Malfatti). No sooner has he sunk his hooks in than he ‘seduces’ her after first spiking her Coca-Cola. At the same time, dysfunctional Joe must fend off confrontations with the mother of his bastard son; using his ill-gotten gains to make child-support payments. When his new girl Sandra also becomes knocked-up, Joe coldly demands she have an abortion (“I only came around for a couple of good fucks! ...I’d rather stay home and jerk off!”). At his most misogynistic, Joe watches while Sandra is gang-raped, then – evidently sickened more by his own behavior than the sordid scene he is watching – vomits afterwards. After jumping to her death from a high-rise in shame (a very fake dummy actually takes the fall, which severely compromises the intended seriousness of the scene by making it laughable), Sandra’s bloodied corpse is gnawed on by scavenger dogs that also root through garbage, thus driving home still more heavy-handed symbolism.

The cast is filled with unprepossessing pimply-faced, shaggy-haired youths, who, while providing verisimilitude, don’t make this uniformly ugly production any easier on the eye. As ugly aurally as it is visually, the soundtrack is padded with bad US-styled ’70s hard rock (sample lyrics: “I’m a gang leader / A man of terror”). Attempts at arty cutting fall flat (blame it on editor Giulio Berruti, documentarist and future director of KILLER NUN [1978], also co-starring Dallesandro). Further burdened with messy philosophical dialogue, IL TEMPO DEGLI ASSASSINI tries too hard to cover too many bases at once (i.e., Church vs. State, Good vs. Evil, and everything else in-between). Narratively all over the shop, the film seems unsure whether it’s a violent, exploitative crime actioner or a more serious social commentary. As is perhaps indicated by its muddled and often dramatically unsound scenario, IL TEMPO DEGLI ASSASSINI seems to have had a troubled production history (shooting was for some reason forestalled, then resumed in July of ’75); which still doesn’t excuse the fact that it’s so horribly directed – blame it on Marcello Andrei, who got the credit! – with more slack than Dallesandro’s acting. It’s also overwrought, with an unbelievably ham-fisted ending that strives for poignancy without even coming close. Virtually the only bearable aspects are some diverting auto stunts. Franco Garofalo, a typecast ‘lowlife’ player seen in other more entertaining Italocrime entries (including Bruno Corbucci’s The COP IN BLUE JEANS and Massimo Dallamano’s COLT 38 SPECIAL SQUAD [both 1976]) is one of the few familiar faces to be found in the supporting cast. 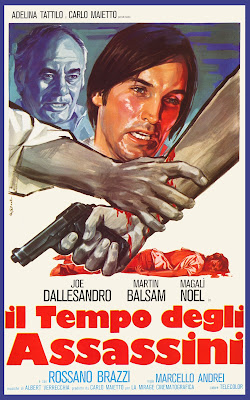 Most apt line of dialogue (incidentally, it and all the other quotes given above are quoted verbatim from the English-dubbed export transfer print contained on Unicorn Video’s erstwhile domestic tape edition): “These things are like a pile of horse manure: the more you turn it over, the more it stinks!” There’s a message in there somewhere...

Despite the rather uneven nature of the film itself, there isn’t much fault to be had with Subkultur’s recent Blu-ray/DVD Combo (encoded for Region B and Region 2, respectively), which gives the film a much spiffier appearance than it probably deserves.  Every pimply-faced, shaggy-haired youth literally pops off the screen, while Dallesandro’s trademark “Joe” tattoo is even more clearly visible in this superb HD rendering.  Although lacking in any real substantial or illuminating extras, this edition contains two versions of the film, including the original, full-length (96m18s) version containing both German and Italian language options as well as optional English subtitles; it would have been nice to have the English dub-track, but it’s no great loss.  The second version (in German only) is the German theatrical print (in much rougher shape), which runs 89m26s and shortens all sorts of bits and pieces, including the film’s opening car chase. This version also contains a number of unique German-language trailers, which play before the main feature including one for Ernesto Gastaldi's The LONELY VIOLENT BEACH (1971) under the title ROCKER STERBEN NICHT SO LEICHT.  Other extras include both the German and Italian trailers (in HD), a photo and poster gallery and a “trailershow” highlighting some of the label's other releases.  A 32-page German-language booklet with writing from Pelle Felsch and Cristoph Draxtra is also included.  This Blu-ray is limited to only 1000 copies, so grab it while you still can!  Order it at DiabolikDVD here.
Posted by Dennis Capicik at Tuesday, September 01, 2015