A LOOK BACK AT GIULIANO CARNIMEO'S ONCE UPON A TIME IN THE WEST...THERE WAS A MAN CALLED INVINCIBLE 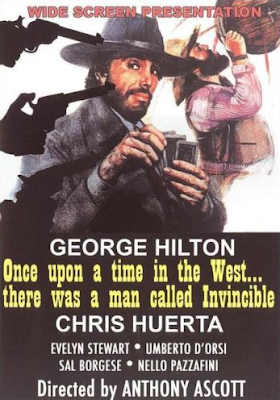 This movie is largely a plotless series of comic vignettes, but I’ll give a general plot synopsis anyway, for those who might want it; so those wishing to avoid spoilers might want to skip down to the next paragraph. In Apple Pie City, Texas, circa the 1870s, a shipment of miners’ gold must be transported from the McPiedish bank to a safe in Dallas. For a $20,000 fee, roving saddletramp Tricky Dicky (George Hilton) is just the man for the job. With the so-called “Bambi” (Cris Huerta), sheriff of Apple Pie, Tricky disguises their wagon like that of a travelling medicine show to fool potential robbers. Along the route they must foil a succession of different bandit groups, including a convent full of fake friars. Upon arrival in Dallas, authorities learn that their supposed load of gold dust is in actuality merely painted lead powder, and Tricky and Bambi are thrown in jail as suspects in the genuine article’s theft. Tricky knows Mr. McPiedish (Umberto D’Orsi) and his accomplice Councillor Apple (Dante Cleri) are responsible for stealing the gold from the former’s own bank and trying to pin the suspicion on them. Thus, Tricky and Bambi escape from jail and pose as guests at the crooked banker’s fancy dress party to find out what became of the real gold. They learn that, with the complicity of local saloonkeeper and comely confectionary owner Miss Marlene (“Evelyn Stewart” a.k.a. Ida Galli), McPiedish has been concealing the shiny yellow stuff inside baked goods and smuggling it to Mexico...

Written by Tito Carpi, produced by Luciano Martino and Mino Loy, photographed by Stelvio Massi and scored by Bruno Nicolai, this zany comedic spaghetti western was originially released in Italy in 1973 as LO CHIAMAVANO TRESETTE... GIOCAVA SEMPRE COL MORTO / “His Name is Three-Seven... He Plays a Dead Man’s Hand,” and later (circa the ’80s) turned up on Venezuelan VHS tape (label long since forgotten!), dubbed into English and with Spanish subtitles.1 For the dubbed version, Hilton’s title character was rather foolishly renamed “Tricky Dicky,” of all things (!). The original Italian name of Hilton’s character is derived from Tressette, which, along with Scopone – which was the surname of the character played by Anthony Steffen in Juan Bosch’s “straight” SW, TEN KILLERS COME FROM AFAR (1972) – is one of Italy’s most popular national card games. The main goal of Tressette, of which there are numerous regional variations, is to acquire “three sevens” (totalling twenty-one). Hence: 21 is the winner and beats all the rest. The fourth player in the game is traditionally referred to as the “Dead Man’s Hand,” hence this the first film in the Tresette duo’s Italo title. In the opening scene of the sequel (see below), Hilton interrupts a card game and asks to sit-in as the fourth player (i.e., the dead man). When Hilton and Nello Pazzafini’s character face off in the same film, they both make jokes about clubs being used as trumpcards. These in-jokes would probably be lost on all non-Tressette enthusiasts.

With Hilton as his droll leading man, Giuliano Carnimeo – a.k.a. “Anthony Ascott” – turned out some of the best comedic spaghetti westerns of all (e.g., THEY CALL ME HALLELUJAH [1971], which was released on N. American videotape by Academy Home Entertainment back in the day as GUNS FOR DOLLARS). Including a slapstick barroom brawl behind the opening credits, this present pair-up of the filmmaker and star betrays itself as an outright freeforall right from frame one; indeed, both of Hilton’s & Carnimeo’s “Tricky Dicky” duo – the sequel was tagged The CRAZY BUNCH on certain Anglo export prints – are far zanier than their pair of Hallelujah films, but are nonetheless most entertaining indeed (quite possibly because of the added zaniness rather than merely in spite of it). If kartoon king Tex Avery had ever made a live-action western spoof starring The Three Stooges, chances are it’d probably look something like this!

A set of false teeth are yanked from their owner’s chops while still attached to the man’s forearm they have just bitten hold of. A mousetrap snaps shut on a howling bandit’s fingers. A boxing glove KO’s a man as it boings from a jack-in-a-box. A man is smacked in the face with a frying pan and the impact leaves his features indented in its iron surface. Twin-nostrilled shotgun muzzles fill the screen in distorted fisheye closeups. Tricky Dicky (known as “Tresette” in Italian and French prints) paints the bars of his jail-cell window pale blue so that they’ll blend in with the sky and thus fool the guard into thinking he’s sawed through them and flown the coop. A wilting cactus carries flaccid phallic symbolism apropos to the emasculated plotline. To verify that the gold dust really is of a full 24 carats, Hilton snorts a sample like snuff. Fast-motion sometimes clicks in at unexpected moments. Throwaways include an Italian woman with a mustache desperately in search of hair remover; and Pietro Ceccarelli as the aptly-named “Bald Bill,” a chromedome bandit who is treated with hair-restoring tonic and sprouts a huge afro in under a minute like some giant humanoid Chia Pet (!). Gutter slang and a bona fide f-word – a relative rarity even in the tough-as-nails spaghetti realm – pepper the outrageous dialogue.

Portly Spanish player Cris Huerta plays another in his long line of big’n’bouncy Bud Spencer imitations (e.g., “Steve McCoy”/Ignacio F. Iquino’s The FAMOUS OF TRINITY [1972]), as the gazelle-like “Bambi,” whose ironic name simultaneously also evokes an abbreviation of Spencer’s much more famous Bambino characterization. Spaghetti heavy Sal Borgese steals his one hilarious scene as one Salvatore Pappallardo, a rubber-faced, hot-tempered Sicilian gangster in a bombetta (“bowler hat”) who threatens to insert his sawed-off scattergun into Tricky Dicky where the sun don’t shine (a threat to which Hilton primly responds, “I prefer not having things stuck up my little bottom”). Silly, inoffensive straight / bi / gay jokes abound, with nothing in the way of any genuine mean-spiritedness involved. For instance, Dicky’s rivals for the gold include “The Bent Gang” and “The Closet Cousins.” Then there’s “Tang Orango” (alias “Orangutan”), father of a fraternal trio calling themselves “The Three Speedy Fingers.” And we also get the late, great Nello Pazzafini as “Aureola” Joe, phony abbot to a brotherhood of phony monks (throwbacks to both of Ascott’s Hallelujah films, the first of which also included a phony nun in the form of Agata Flori, too). In keeping with the director’s proven fondness for facetious ‘anticlericalism’ – see also the aforementioned THEY CALL ME HALLELUJAH and its 1972 sequel, DEEP WEST (which the IMDb incorrectly gives as the US title for the first Hallelujah film) – mock-monks play poker using a deck of cards bearing icon-like pictures of religious personages.

A recurring gag involves “Twinkle Toes,” a homosexual pistolero dressed all in fetishistic black leather who keeps popping up without notice and challenging Tricky Dicky to gunfights as a test of his manhood. Played by Tony Norton – who frequently essayed such ‘Black Bart’ types (e.g., in “E.B. Clucher”/Enzo Barboni’s TRINITY IS STILL MY NAME [1971]) – Twinkle Toes is clearly based on suave Latin rascal Gilbert Roland (with whom Hilton had co-starred in both Enzo Girolami Castellari’s ANY GUN CAN PLAY [1967] and “George Holloway”/Giorgio Capitani’s The RUTHLESS FOUR [1968]; the latter of which I reviewed in Weng’s Chop #7).

Hilton always seems to be having a whale of a time here. His good-natured performance coupled with those of his colleagues helps one forget that the rudimentary plot is merely an excuse for a non-stop stampede of gags, which thankfully provoke more guffaws – or at least chuckles – than groans from the audience. Beneath a cascade of corn-coloured ringlets, swan-necked Ida Galli is as delicate and delectable as one of the fancy puff pastries baked by her character.

Perhaps the biggest surprise – then again, maybe not, considering the relentlessly good-natured context – is that not one person gets killed throughout the runtime. Call this one the AIRPLANE! of spaghetti westerns, which soars to higher heights of both the sublime and the ridiculous than any ten lesser trivial TRINITY ripoffs. It was followed by another fun one, The CRAZY BUNCH (1974).

1. In 2006, this was released on DVD courtesy of Southern DVD, a small label based in South Africa, which also released numerous other rare spaghetti westerns.  Now OOP, but still available through some online retailers or Ebay, this DVD has English and Italian audio options and retains Stelvio Massi’s original 2.35:1 scope photography.  The only extra is the film’s lively theatrical trailer.
Posted by Dennis Capicik at Sunday, July 12, 2015