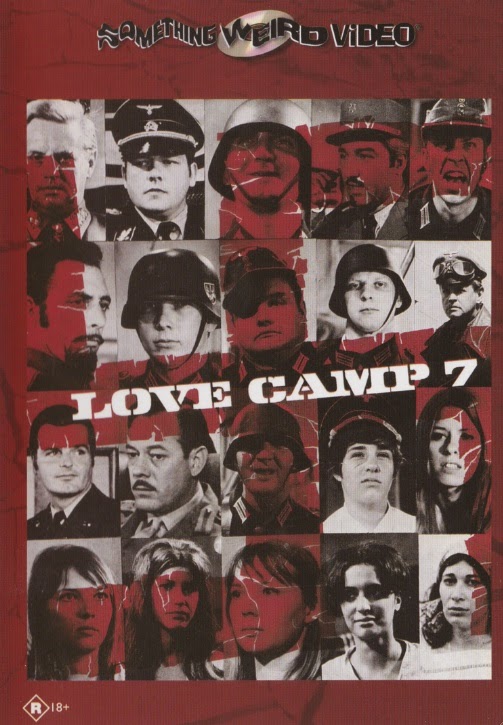 Australian DVD ad-blurb: “Before there was Ilsa, there was LOVE CAMP 7!”

Long before Ilsa inflicted her own brand of pain and punishment in Don Edmonds’ now infamous ILSA, SHE WOLF OF THE SS (1974), prolific producer David F. Friedman, who produced ILSA under the guise of Herman Traeger, also produced one of the earliest examples of this dubious subgenre, Lee Frost’s LOVE CAMP 7 (1968).  Produced alongside frequent collaborator Bob Cresse (billed here as R.W. Cresse) and Frost’s usual producer of choice, Wes Bishop, LOVE CAMP 7 was yet another ’60s ‘roughie’ (a subgenre of exploitation cinema that featured equal doses of sex mixed with violence) set against the backdrop of a Nazi brothel.  Along with Edmonds’ ILSA, SHE WOLF OF THE SS, and, to a lesser extent, Liliana Cavani’s considerably more up-market The NIGHT PORTER (1974), Lee Frost’s LOVE CAMP 7 became the prototype of this usually scorned genre and paved the way for a quick succession of Nazi-themed sleaze pictures in the ’70s (predominately out of Italy), beginning with Tinto Brass’ lavish but highly sleazy SALON KITTY (1976) and followed by an entire slew of like-minded sleaze, including Sergio Garrone’s back-to-back shockers SS EXPERIMENT LOVE CAMP (1976) and SS CAMP 5: WOMEN’S HELL (1977), Cesare Canevari’s The GESTAPO’S LAST ORGY (1977), Mario Caiano’s (hiding under his usual pseudonym of William Hawkins) NAZI LOVE CAMP #27 (1977), and what is probably the nadir of the entire genre, Paolo Solvay’s SS HELL CAMP (1977).  Of course, there were numerous others, but you get the idea.

The story of LOVE CAMP 7, such that it is, revolves around two WAC lieutenants (Maria Lease and Kathy Williams) who are sent to a love camp to contact Martha Grossman, a former German engineer who has helped devise a revolutionary aircraft engine but, because of her Jewish background, she’s been sent to one of these camps and, naturally, the US Army wants to retrieve her.  “You have been brought here for one purpose and one purpose only: that is to please the frontline officers of our armies!” exclaims the Commandant (also essayed by producer R.W. Cresse), who seems to partake in or at the very least oversee most of the humiliation and torture while grinning and cackling in ecstatic glee.  Of course, once our heroines arrive at the camp, the narrative takes a back seat as torture, degradation and abundant nudity fill the screen – all typical staples of the ‘roughie’.

Both Cresse and Frost, through the their production company Olympic International, were quite prolific during the ‘60s beginning with their nudie-monster romp HOUSE ON BARE MOUNTAIN (1962), and then, along with LOVE CAMP 7, they produced HOT SPUR (1968) and The SCAVENGERS (1969), a couple of western-themed ‘roughies’, which also turned out to be some of their most popular films.  Both Frost and Cresse would team up once again (pseudonymously) a few years later on A CLIMAX OF BLUE POWER (1974 – released in ‘75), a very bleak hardcore effort, which apparently, Frost put together while he was busy working on RACE WITH THE DEVIL (1975) for 20th Century Fox, which, in the end, was handed over to director Jack Starrett.

Although directed by Frost, LOVE CAMP 7 is pretty much the brainchild of writer/producer Bob Cresse, and, to this very day, remains an effectively nasty piece of work.  In fact, when Something Weird Video initially planned to release this on DVD in the US via their distribution deal with Image Entertainment, they simply rejected it due to subject matter.  Despite the 1968 production date, LOVE CAMP 7 still delivers a number of rather eye-popping BDSM tableaus, which usually revolve around pain and restraint, with one particular flogging that lasts uncomfortably long in duration; the entire film is like one of those adult pocket books from the ’60s come to life.  In fact, the film is still banned in the UK because of “eroticised depictions of sexual violence and repeated association of sex with restraint, pain and humiliation.”  On the flipside, many of the performances also vary wildly and the German ‘accents’ are equally all over the place, which definitely helps lighten the overall tone of the film, and even though nudity abounds, the various sex scenes are hilariously tacky. As well, all male members (pun intended) of the cast keep their pants on; yet another staple of mid-’60s sexploitation, this as a result of stringent laws at the time forbidding male full-frontal nudity.  Also, keep your eyes peeled for Mr. Friedman as a cigar-chomping General who ogles and gropes one of the many unfortunate women stuck in the camp.

Although never released in the US, this was made available from Something Weird Video in Australia in 2005.  Distributed through Siren Visual Entertainment, LOVE CAMP 7 appeared on DVD in a decent transfer, which looked noticeably sharper than Something Weird’s domestic DVD-R and VHS tapes, but unlike many of their other releases (including the Australian ones), this particular DVD was a no frills affair.  This now out-of-print disc contained 14-chapters with titles such as “Bootlicking” and “Servicing the Guards,” and, despite the lack of extras, is worth picking up, if you can still find it.
Posted by Dennis Capicik at Friday, February 13, 2015