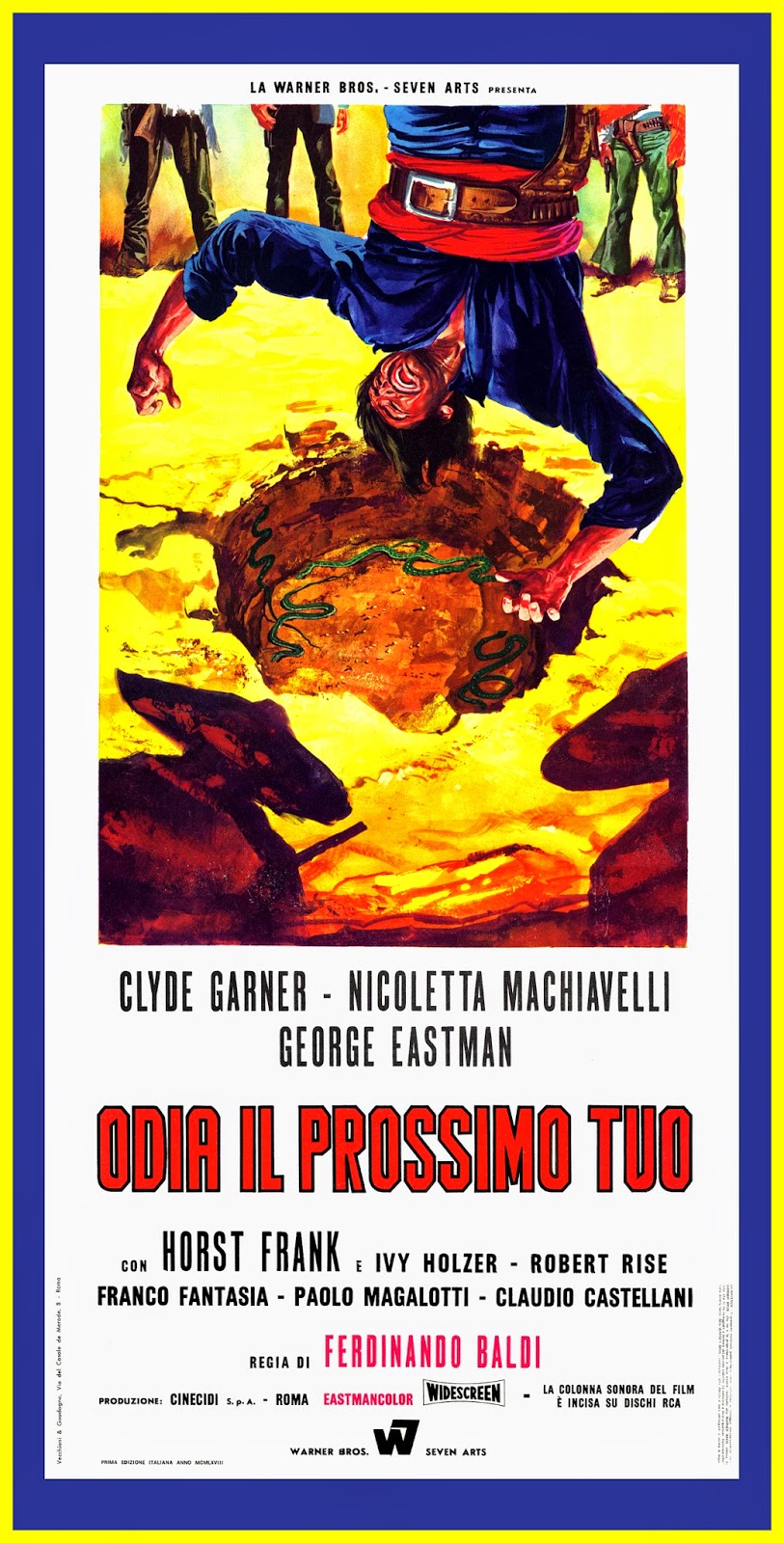 Dramatic voiceover to the Anglo export trailer: “You’re alone now… alone with your fear and your secrets… Then… TERROR possesses you! [gunshots] And this is your fate… Spilled blood calls for more spilled blood… Brutality and violence lead to crime! And in the heart of Man, brutality and violence breed hate! HATE… HATE… ‘HATE THY NEIGHBOR’! – A film in which men abandon their moral principles and become slaves of uncontrollable passions – This is a film which poses the anguishing question: Should a wild and primitive society take the commandment which all religions have rejected? NO! NO! NO! …(COMING SOON).”

Hence, most of the necessary ingredients for one hearty dish of spaghetti – just like Mamma used to make!  Credits are accompanied by yet another virtually unintelligible – not to mention irrelevant – Anglo theme song (sample lyrics” “Two friends / Who together have spent most of life…”).  On Wild East’s unfortunately full-frame DVD, window-boxed action highlights rendered in sepiatone and slow-motion afford the viewer a fine foretaste of the top-notch actioner to follow.  Baldi made some way decent actioners, and this one ranks right up there close to the top of his canon.

Apart from his broader nose, which makes him resemble spaghetti character actor Paolo Gozlino (from “Nick Howard”/Nick Nostro’s ONE AFTER THE OTHER [1968], among others), Greek leading man Spyros Focás – would later play Zorro and was here billed under the Anglo alias of “Clyde Garner” – somehow also possesses a recognizable Terence Hill quality (circa Giuseppe Colizzi’s GOD FORGIVES – I DON’T [1967]).  This resemblance was undoubtedly no coincidence, as director Ferdinando Baldi had recently triple-barrelled Hill, Horst Frank and “George Eastman”/Luigi Montefiori in the highly profitable VIVA DJANGO! (1967), the first official sequel to Sergio Corbucci’s and Franco Nero’s seminal DJANGO (1966).  Frank and Montefiori share similar billing and onscreen relationship here (main difference is that Frank abstains from all dirty work…until things get personal, that is).  Both actors smile a lot with their mouths but never their eyes, oozing verminous hidden agendas from their every pore, and Frank owns more customized recreational torture devices than a Vatican-appointed Grand Inquisitor.  For example, (as per the film’s snazzy original locandina poster illustration, reproduced nearby) his henchmen hang Montefiori by his feet from a gibbet above a roiling snake-pit, while caged rats gnaw at the honey-glazed rope which suspends him.  Montefiori plays such a vile pig of a man that his by no means upstanding ‘colleague’ – played by Paolo Magalotti – seems like a comparative nice guy; who rescues heroine Nicoletta Machiavelli from imminent sexual molestation under Montefiori’s sweaty palms.  Overshadowing Focás as the antihero, the vilely villainous Montefiori (himself simply anti) is given a much more prominent part, amounting to one of the actor’s meatiest, meanest and most memorable.  Even though – and quite possibly because – it takes Horst Frank a full .45 cylinder to drop him, Montefiori still goes down laughing. 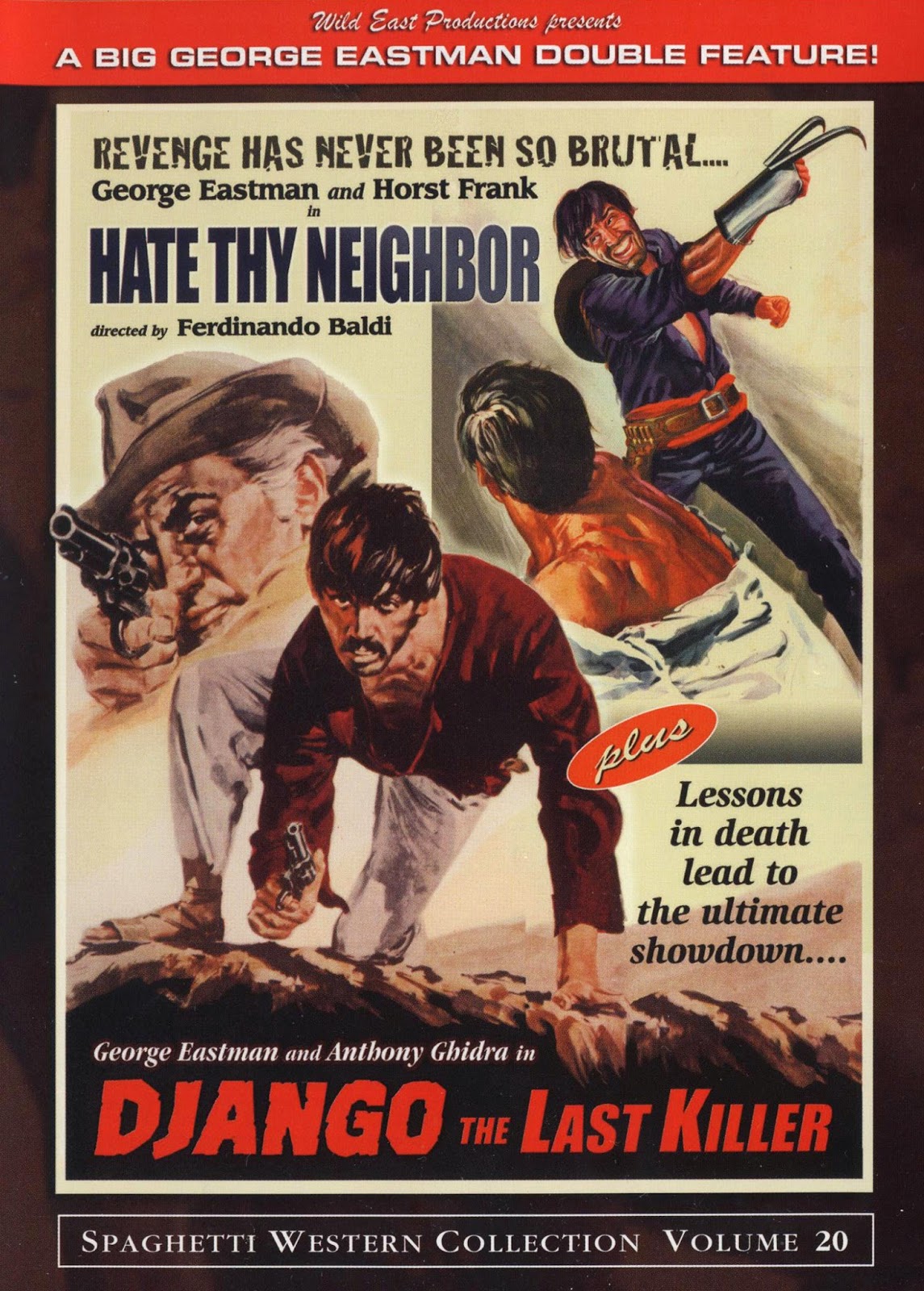 As Focás’s string-pulling nemesis, megalomaniacal master puppeteer Frank plays his patented decadent, filthy-rich dirtbag (“I don’t like jokes, if the jokes’s on me”); a cold, calculating prick who gets his kicks from watching corralled Mexican peons fight to the death using huge steel claws and tiny wicker shields (not much protection there!).  A definite triple-zero dressed up as a 13, femme fatale Ivy Holzer becomes openly turned-on at the mere sight of blood.  When the vanquished have fallen, Frank forces the victor to mercy-kill his opponent, prolonging the psychological anguish by only placing one bullet in the cylinder.  In this way both the ‘victor’ and the vanquished are forced to endure the suspenseful click-click-click of empty chambers counting down until finally the gun goes off, ending both their suspense and very existence simultaneously.  Hence, the film’s title carries double relevance, jointly standing for Focás’s animosity towards his cowardly hometowners and Frank’s forced pitting of peon against peon for his personal entertainment.

Eccentric crapulent coffinmaker Roberto Rizzo – who plays the accordion at funerals – sneaks sips from a whiskey bottle, which he stashes inside a miniature casket.  Although self-described as “a peaceful man,” Rizzo lugs a big hunting rifle and is not averse to the occasional vendetta to fill both his coffers…and his coffins.

Focás, his lovely leading lady Nicoletta Machiavelli and onscreen nemesis Frank all read their lines in English, though all were evidently redubbed for the occasion by different mouths.  Action sequences are both dynamic and well-edited, with fight scenes (arranged by old gun and sword-hand Franco Fantasia) staged with relish and conviction.  And for all its gutsy violence, the film is unafraid to end on an upbeat note (“You’ve finally met a man who doesn’t know how to hate!”).  HATE THY NEIGHBOR is memorable “B”-grade spaghetti all the way, ranking right up there with Romolo Guerrieri’s 10,000 DOLLARS BLOOD MONEY (1967), “Edward G. Muller”/Edoardo Mulargia’s SAY YOUR PRAYERS AND DIG YOUR GRAVE (1968), and Sergio Garrone’s NO ROOM TO DIE (1969), top-notch ‘no-frills’ titles all.  You’ll be back for seconds, neighbour!

Note: Assistanr director was Mario Bianchi.  The serpentine “Eastman”/Montefiori takes a pitchfork to Focás herein at the same farmhouse set seen in Alfonso Balcázar’s FOUR DOLLARS OF REVENGE (1966), Roberto Mauri’s SHOTGUN (1968), and many others.  On Wild East’s Region 1 DVD, the title presently under discussion is paired with a nice widescreen print of “Joseph Warren”/Giuseppe Vari’s DJANGO, THE LAST KILLER (1967), also co-starring Eastman, albeit playing a far less reptilian character than he does here.
Posted by Dennis Capicik at Thursday, June 19, 2014