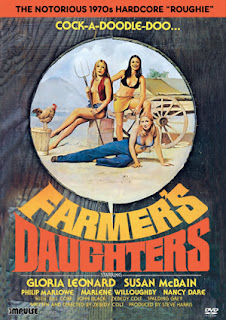 Taking its cue from the numerous ‘roughies’ (a brand of sexploitation film mixing sex with violence) and Wes Craven’s LAST HOUSE ON THE LEFT (1972), this backyard production, which, incidentally, looks like it was shot over one long weekend somewhere in either upstate New York or New Jersey (The DEVIL INSIDE HER was shot in Lambertville, New Jersey, for those that care about such things), is an utterly irredeemable porno flick.  At just over an hour in length, director Colt strips the film down to the bare essentials with virtually wall-to-wall sex, and given the film’s horror-styled approach, it’s sadistic edge is definitely hard to forget.  As with most of Colt’s film work, The FARMER’S DAUGHTERS is a very low-budget affair and not exactly an inventive piece of filmmaking, but the rural setting (imagine an even lower-budgeted and far nastier version of all those Harry Novak hillbilly flicks like TOBACCO ROODY [1970]), and surprise casting of Spalding Gray (1941-2004) – future “legit” actor and monologist from such films as Roland Joffe’s The KILLING FIELDS (1984) and Steven Soderbergh’s KING OF THE HILL (1993) – give the film an odd distinction among the glut of ’70s smut. But what really separates Colt’s humble adult features of the time is his rather unflappable approach to the scuzzy material.  Although sloppily shot by Charles Lamont (who also worked with Colt on numerous occasions) with lots of hand-held camerawork, the rather unrehearsed feel also adds to the depraved verisimilitude, and to their credit, Colt and Lamont do the best they can with the ‘one-day wonder’ budget which producer Leonard Kirtman (working under his “Leon de Leon” moniker) most likely allotted them.  As for Kirtman, he produced a number of films throughout the ’70s, including the aforementioned The DEVIL INSIDE HER, he was also the director of CARNIVAL OF BLOOD (1970), a low-budget carny horror featuring an early appearance from character actor Burt Young, and then, later in the decade – usually credited as “Leon Gucci” – he directed a number of adult features like INSIDE DESIREÉ COUSTEAU (1978).

Originally available on DVD through Alpha Blue Archives in a Zebedy Colt Triple Feature and separately from Gourmet Video, both these versions utilized a cut, VHS-sourced version, which was quite the eyesore.  Don’t expect any earth-shattering restorations with this newest DVD release from Impulse Pictures; it includes all the usual scratches and splices indicative of no-budget stuff like this, but unlike those earlier, inferior releases, the picture quality is vastly improved and, even more importantly, this is the rarely-seen uncut version which, according to the ad-copy, is “one of the most eyebrow raising films in the Impulse Pictures library!” Presented in its original 1.33:1 aspect ratio, there are no extras related to the release, but this disc does include a “sneak peek” at Impulse’s ongoing and exhaustive 42nd STREET FOREVER - THE PEEP SHOW COLLECTION series, which has so far spawned 13 volumes.  Buy The FARMER’S DAUGHTERS from DiabolikDVD here.
Posted by Dennis Capicik at Wednesday, November 18, 2015