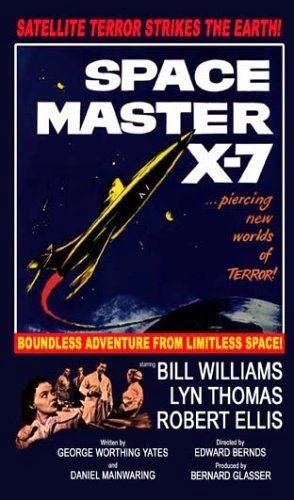 I originally saw this movie on VHS tape way back when via the domestic Movies Unlimited label, but it later showed up on late-night TV in Canada on Toronto’s own SPACE station. As of this writing there was at least one version – ripped from a videotaped copy of an American TV airing – at YouTube, and one copy of that aforementioned VHS version was up for sale on Amazon. Comics legend and respected cult movie fandom scribe Stephen R. Bissette gave it some much-needed exposure in a recent issue (#8) of Monster! digest zine, so I thought I’d also give it some coverage here at Unpopped Cinema. A modest, little-remembered if by no means entirely worthless movie like this needs all the publicity it can get!

The title of this pretty much forgotten 1958 SF item – which was filmed in a nominal photographic process called “RegalScope” – seems to be promising some sort of high-flying intergalactic adventure (possibly something much along the lines of Kurt Neumann’s “lost in space” classic ROCKETSHIP X-M [1950]). This advance initial impression is further strengthened by the film’s spacey opening titles, which are laid over a star-field and set to ominous music (much of which saw later reuse in Romero’s NIGHT OF THE LIVING DEAD [1968], which is definitely of historical note). What follows is a wholly fictional if “factually” presented, docudrama-style narrative – sundry stock footage is used, which further adds to the documentarian tone – that often comes across as too academic, with an air of cold clinical detachment that sometimes serves to distance itself from the viewer. Of its type – there were precious few other attempts then being made at serious adult-oriented science fiction – it is rather well-done, and, while the action does remain firmly down here on terra firma rather than zooming off into outer space, as well as being a pseudo-“blob” entry this film is a minor if at times quite engaging forerunner of Michael Crichton’s The ANDROMEDA STRAIN (1971).

S.M. X-7 opens with a dry explanation from an authoritative scientific type: as America’s answer to the Soviet Sputnik, the “Space Master XM-712” (its full official title) was recently launched into orbit some 1000 miles above the Earth.

Stentorian-voiced trailer-narrating great Paul Frees (1920-1986) here gets a comparatively rare onscreen acting role as egghead Johns Hopkins biologist Dr. Charles T. Pommer, who hopes that the returning titular satellite may have collected some extraterrestrial microorganisms during its spaceflight, thus providing conclusive confirmation as to the existence of life in outer space (an obligatory throwaway comment is at one point inevitably made regarding “Little green men in flying saucers”). It soon develops that the Space Master has indeed brought back alien life-forms with it, but they are much smaller than even little green men: try tiny red microbes! Dubbed “Blood Rust”, a parasitic form of fungal plant life, this heretofore unknown organism rapidly reproduces itself via microscopic spores, proliferating exponentially in a brief span of time.

Embroiled in a marital dispute that involves a custody battle, Frees’ character is a pompously arrogant authoritarian who thinks with his little head as much as his big one. While he is conducting his experiments with it, the Blood Rust gets out of control and proceeds to spread like wildfire, claiming the scientist’s life in the process. It’s a shame that Frees is killed-off in the first quarter, as – insufferable bastard though he is – his is the film’s most offbeat and interesting character; and it’s nice to see the face that goes with his distinctive speech pattern for a change. Once heard, his voice becomes easily recognizable thereafter, and there’s no mistaking it if you ever hear it again; indeed, he had such a distinctive one that other narrators of movie trailers sometimes tried their best to emulate his delivery, albeit usually only sounding like cheap imitations of the real deal.

Presented as “pulsing”, rubbery mats of protoplasm – which, as “monsters” go, frankly makes for a rather inert and unintimidating menace – the ever-multiplying, protein-absorbing Blood Rust quickly becomes a deadly blight on humanity itself; threatening to proliferate unchecked and inundate our entire globe if not dealt with immediately and with extreme prejudice. Along with low-ranking military everyman Pvt. Ratigan (Robert Ellis), main hero John Hand (Bill Williams) attempts to incinerate the fatal fungus. It becomes a desperate race against time by the authorities to ensure that every last trace of the carnivorous spores has been eradicated in order to prevent global contagion of pandemic proportions. That aspect of the plot makes it rather topical in these modern times of societal anxiety about potential deadly infections being spread from nation to nation (fears about such events seem to have eclipsed anxiety about the possibility of nuclear holocaust in the minds of the masses today).

Because she had come into contact with the Rust and become a carrier (“…a thousand Typhoid Marys rolled-up into one!”), a massive manhunt is mobilized to track down the late Frees character’s missing ex, Laura Greeling (Lyn Thomas), who unwittingly threatens to spread the infection if she is not apprehended and decontaminated ASAP. The Blood Rust multiplies in the baggage compartment of an airliner in mid-flight. Little real suspenseful tension is generated, even when the much-too-lifelessly-listless Blood Rust begins to bubble, BLOB-like, into the passenger cabin and crawl all over the plane’s outer fuselage. Coming as no surprise to anybody – it was, of course, a foregone conclusion – both the airplane and the world are ultimately saved.

The film was directed by-the-numbers if adequately enough by Edward Bernds, a long-time director of comedy shorts and features starring The Three Stooges (in all their various lineups). Here flying solo from his usual two nutty buddies, moonlighting former-and-future #1 Stooge Moe Howard (1897-1975) puts in an amusing “straight” cameo as a smart-mouthed cabbie named Rettlinger, who is at one point heard making the obvious in-joke, “I’m all by myself!” (Similarly, former replacement 3rd Stooge Joe Besser [1907-1988] also flew solo to do a quickie cameo in Gene Nelson’s lesser-seen, downbeat man-into-monster movie HAND OF DEATH [1962].)

By no means as dull as dishwater, if sadly lacking in much genuine imagination and excitement or any sense of either humor or wonder, the matter-of-fact and efficiently methodical SPACE MASTER X-7 largely registers like an episode of Dragnet with mild sci-fi elements as the Office of Internal Security strives to solve the pressing problem in time for the final reel to unroll through the sprockets. Diehard, completist adherents of ’Fifties SF might well derive some benefit from this, but insomniacs with a low tolerance for the more naïve filmic fare of yesteryear might want to take it like cinematic Sominex instead, because it will surely have them catching some ZZZ’s in no time.

NOTE: Although it had nothing whatsoever to do with the movie and evidently only stole its name because it sounded catchy, SpaceMaster X-7 (a.k.a. Space War) was a sci-fi-themed shooter video game cartridge created by Sirius and put out by 20th Century-Fox for the Atari 2600 and Sears systems in 1983.
Posted by Dennis Capicik at Wednesday, December 24, 2014