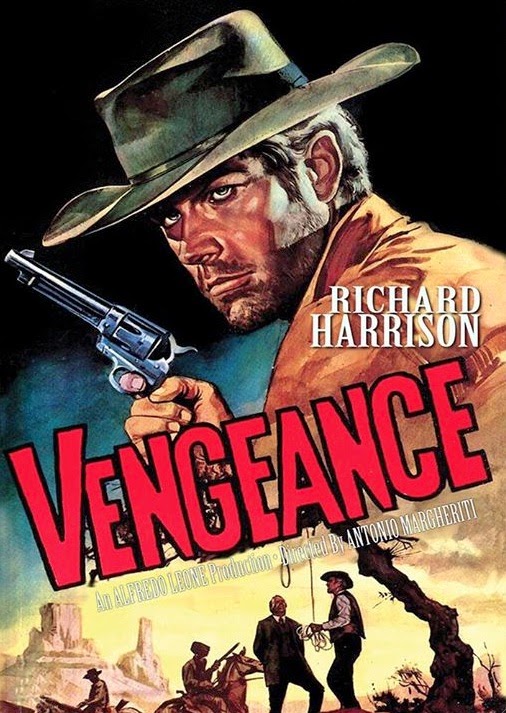 Cinevision ad-line: “FIVE MEN HELD THE BALANCE OF DEATH... his revenge exploded in a massacre of hell!”


I’ll begin with a synopsis, so those wishing to avoid spoilers might want to skip this paragraph: The time is the 1870s. After a botched robbery at an old fortress, halfbreed Cheyenne outlaw J. Roko – pronounced “Rocko” – Barrett (Richard Harrison) stumbles across the remains of his friend, Richie (Alberto Dell’Acqua); who has been horribly drawn-and-quartered by a rival gang for refusing to reveal the whereabouts of some stolen gold. Thus, Roko seeks retribution. He first finds Domingo (“Alan Collins”/Luciano Pigozzi), their former lookout-man, who had made off with the gold, and Roko learns that Mendoza (Claudio Camaso), mastermind behind the robbery, was killed while trying to escape. Roko accuses Domingo of being in complicity with the killers. Frightened for his life, Domingo offers up the names of three of the killers, a gringo called Yuma (Goffredo “Freddy” Unger), a Mexican named Laredo (“Louis Santis”/Lucio de Santis) and “The Kid” (Werner Pochath), but Roko is nonetheless forced to kill the informant. The vengeful halfbreed then locates Yuma, a professional card shark, killing him in self-defence following a saloon brawl. Roko subsequently arrives in a small border town that is terrorized by Laredo and his bandits. After pinning on a tin star, Roko imprisons Jane Mason (Sheyla Rosin), Laredo’s recently-purchased woman. When Laredo returns to town and tries to free Jane from jail, after an extended bandit siege of the jailhouse, Roko eliminates the gang, followed by their leader. Moving on, Roko is shadowed by a mysterious Pinkerton agent (“Paul Lino”/Paolo Gozlino), who is searching for the gang’s stolen gold. Roko is soon made a prisoner and tortured by The Kid and his boys, including an Indian named Chataw (Aysanoa Runachugua). The Kid foolishly takes Roko into town to show off his captive prize to the recently-liberated townsfolk, but Roko kills him during a staged duel in the bar. Realizing his old friend and cohort Mendoza was not really killed during the robbery, Roko catches up to him at a disused sulphur mine. A battle breaks out, with Roko methodically killing off Mendoza’s gangmembers, leading into the final fateful – and fatal – showdown…

Composer Carlo Savina and singer Don Powell’s haunting theme prepares you for this way-above-average 1968 spaghetti vendetta. An Italian/German co-production directed by “Anthony Dawson”/Antonio Margheriti, VENGEANCE (whose original Italo title is JOKO INVOCA DIO... E MUORI! / “Joko, Invoke God...and Die!”) is a violent, well-paced action yarn with a gut-wrenching opener (from the U.S. pressbook: “Jocko [a.k.a. Roko] finds the mutilated body of his friend and vows vengeance”). Atop a slippery carpet of mud, stunt actor Alberto Dell’Acqua tugs and strains at the ropes attached to his extremities. The presiding bandit (Goffredo Unger) draws a Queen of Spades and says, “Bad luck.” American pressbook quote:When Ricky [a.k.a. Richie] will not talk, the marauders tie his hands, legs and neck to ropes which they hold while mounted on their horses. They spur the animals and rip Ricky [a.k.a. Richie] to death.

Unger is subsequently killed when star Richard Harrison power-boots the broken neck of a booze bottle into his throat. A bandit’s stomach is lacerated by a close range blast from a sawed-off shotgun. When captured, Harrison is staked out under an exploding scarlet dawn, his eyelids propped open with short twigs by reputed authentic Aboriginal American actor Aysanoa Runachugua (“Mother Sun shine for those she like!”). Incidentally, Giuliano Gemma had suffered a similar fate and was temporarily afflicted with sun blindness as a result in Giorgio Ferroni’s lively FORT YUMA GOLD (1966), which also included a major action sequence set in a mineworking, as here. The violent mood of the present film is often effectively perforated by stabs of psyched-out electric guitar.Appropriately considering its macabre horror movie-styled violence, VENGEANCE sprang from the pen of Italo fantasy film maestro Antonio Margheriti; concerning whom author David Pirie wrote in Monthly Film Bulletin:

Judging by this distinctive if piecemeal revenge Western, his work (which has ranged from traditionally anglophile Italian horror to some picturesque science fiction) deserves closer attention. VENGEANCE has a strange and colourful Gothic flavour...  visual panache and ingenuity lift [it] out of the Italian Western rut and lend it a flavour more commonly associated with Bava or Freda.

As a fantasist, Margheriti had often found himself obscured in the long shadows cast by his countrymen Mario Bava (THE ROAD TO FORT ALAMO [1964]) and Riccardo Freda (DEATH AT OWELL ROCK [1967]). All three gentlemen had by this point tried their hands at a western, with mostly mediocre results. Here Margheriti seated himself more squarely in the saddle at the directorial reins, and, by besting his two rivals, earned his silver spurs...with bells on. First off, the revenge-driven script (including such grim nuggets of dialogue as “Right now, he’s ridin’ the Devil in Hell!”) well suits the morally claustrophobic confines of the spaghetti western, more-so than had Margheriti’s earlier, lighter-hearted effort DYNAMITE JOE (1966). Here Margheriti demonstrates his ability to transfer the baroque atmosphere of the Italian horror movie to the dusty plainscape of the western. He also better uses his knowledge of lighting, camera setups and frame compositions to give the entire affair an eerie timbre; including some nice usage of warm yellow/golden hues, and in the hot flames and cold shadows licking the walls of the sulphur mine setting. Claudio Camaso (née Volontè, Gian Maria’s ne’er-do-well kid bro), who wears a sulphur rock around his neck as a lucky charm, uses the booming echo chambers of his mine lair to psychologically toy with Richard Harrison.

Blue-eyed American lefty Harrison pulls off a strong performance as the mixed-blood Cheyenne, who is scorned by both whiteman and Indian alike. Indicating he is a Northern supporter despite his mixed heritage, upon deputizing himself before liberating Laredo’s enslaved town, Harrison respectfully dusts off a portrait of Abe Lincoln. VENGEANCE is one of Harrison’s best western outings, ranking up there alongside his earlier starrer $100,000 FOR RINGO (1965), directed by Alberto de Martino, and the actor proves once again he can do the ol’ Clintsquint with the best of ’em if given the proper vehicle to strut his stuff in. When asked why he prefers rolling his own cigarettes to smoking cigars, Harrison curtly responds in regards to the latter option, “I don’t like ’em!” When luckless “Alan Collins”/Luciano Pigozzi – that perpetual doormat /whipping boy of Italo-based antiheroes! – is ordered by Harrison to “Stay awhile!” you just know he means a real lo-o-o-ong while (like, maybe Eternity). After killing Collins, Harrison places a short length of the rope used to murder Richie next to the bandit’s corpse, a ritual he obsessively repeats like a serial killer with each successive victim. The writers make fine use of Harrison’s sinister gunhand not once but twice, as our hero outwits his opponents: “You cheated, but you made a mistake...I’m left-handed,” he explains to mortally wounded Werner Pochath, now feeling the tightening clutch of the Devil’s right hand for his careless oversight. A similar error is made by Camaso, who flicks a knife into Harrison’s wrong right hook rather than his southpaw (“Ready ta shoot, friend?”).

Thereon billed under the Anglo alias of “Don Reynolds,” the film’s original story-writer Renato Savino went on to direct Harrison’s entertaining lesser league oater HIS NAME WAS KING (1971) – for which the star evidently wore the same hand-me-down chamois shirt seen here – and Savino was presumably responsible for some of the current film’s dubious translated English dialogue (Lucio de Santis to Harrison: “You stinking Indian, come out and fight! You’re a yellow redskin! ...What’s the matter, halfbreed? You afraid to fight a Mexican face to face?!” [Okay, okay, enough already, amigo!]). To the memory of his lamented segmented buddy, Harrison downs de Santis with a pistol-shot delivered in flawless unison with twin shotgun barrels (that oughta do it). Final image freezes on Camaso’s grinning dead face, with one eye – the Evil one – left open, getting its own personal glimpse of the hell to which he has been consigned.

VENGEANCE is often (arguably) cited as Richard Harrison’s best western, but “Nick Howard”/Nick Nostro’s ONE AFTER THE OTHER – made that same year – ain’t too shabby none neither.

Notes:  Promoted in France as a faux “Django” film, and in Hispanic markets as a phony “El Rojo” outing (see: “Leo Colman”/Leopolda Savona’s EL ROJO [1966], which did at least star Harrison). VENGEANCE was included as part of Seven 7 (France) video’s DVD 5-pack that also includes Giorgio Stegani’s BEYOND THE LAW (1968) and Tonino Valerii’s DAY OF ANGER (1967), both starring Lee Van Cleef; plus Duccio Tessari’s two-pack A PISTOL FOR RINGO and its sequel The RETURN OF RINGO (both 1965), both starring Giuliano Gemma.
Posted by Dennis Capicik at Tuesday, November 25, 2014