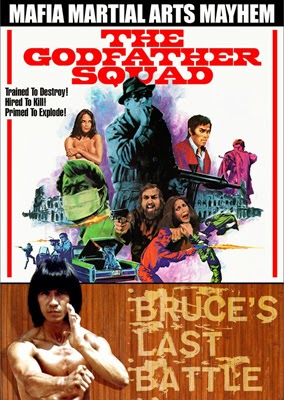 As has since become the stuff of legend, Bruce Lee had taken a working vacation in Rome to shoot location inserts of historical landmarks for his self-directed MA actioner The WAY OF THE DRAGON / a.k.a. RETURN OF THE DRAGON (HK, 1973).  While that film guest-starred (quote) “Italian Beauty” Malisa Longo in a throwaway non-speaking bit – and tit – part and culminates in an epic battle between writer-director-star Lee and Chuck Norris inside the Coliseum, bulk of the footage was actually lensed back in Hong Kong.

Directed by “M. Cardinal”/Ng See Yuen and also variously known under a plethora of alternate titles – including other such Anglo ones as LITTLE GODFATHER and The GODFATHER SQUAD – the present 1974 HK film (whose original title is 香港小教父 / XIANGANG XIAO JIAO FU), clearly took some cues from the aforementioned Lee one, and primarily seems to be an exclusively Hong Kong production which was evidently never given much of a release (if any?) on Italian soil, despite being shot in Rome and its supporting roster of domestic players.  Such sightseeing highlights as the Coliseum and the Trevi Fountain plus authentic footage of a public address delivered by the Pope from a Vatican City balcony further stress the strong Italian Connection (“…Rome was not built in a day.”).

In Hamburg, London and Paris, international dope traffickers have commissioned a clan of Mafiosi under Godfather Don Caro (Nuccio Fava, in coppola and long-coat) to murder Interpol drug enforcement agents via firearm, garrote and even an exploding attack dog (!).  After he bravely interferes with the Caro family’s Hong Kong hit, for daring to presume his martial artistry is superior to mafia might (!!), kung fu movie star Wang Liu/Wong Lei (seasoned HK MA player Bruce Liang Hsiao/Leung Siu Lung) is marked for death by the mob (“You’ll get that Chinese punk’s head on a plate!”).  In order to have an opportunity to liquidate him, they dupe Wang into jetting to Rome to star in a flick bearing the ironic shooting title “The LAST OF KUNG FU” (not!).  With all the contracts signed in more ways than one, no sooner has Wang’s brother warned him to return to Hong Kong out of harm’s way than he is stabbed to death… thus providing Wang with a much stronger motive for sticking around.  Only the unexpected advent of his production company’s insurance broker Ivy (Shirley Corrigan) saves Wang and his preteen brother Stone (Yasuaki Kurata) from being blown to bits by a bogus tourist’s booby-trapped camera.

Don Caro’s gang consists of his three sons, two of whom are adopted: peplum / spagwest fan favourite Gordon Mitchell co-stars as sadistic Duke (“The son of a top Nazi… When he was ten, he killed two negro kids!”), who openly struts around in public wearing a complete pseudo-Gestapo uniform; while Sakana (Chong Tin Bui Chiu) is the progeny of a vicious Japanese army officer!  Caro’s biological #1 son is Cani (Mario Cutini), who makes an unsuccessful attempt on Wang’s life with a silenced pistol during aforementioned papal speech and gets brained against an architectural landmark for his ineptitude.  Another bid is made on Wang’s life when a stuntman on his film switches blanks for real bullets in his prop pistol; a detail which eerily prefigures events surrounding the real-life premature death of Bruce Lee’s son Brandon, who was accidentally killed by a malfunctioning SFX firearm on the set of Alex Proyas’ The CROW (1994).  In one of the present film’s more lurid moments, Mitchell unloads a tommy-gun at Liang while laughing like a maniac; leading into an epic rooftop chase/brawl that ends with Mitchell’s dummy substitute taking a lofty nosedive from a water tower.

Liang’s ever-resourceful character (“He’s famous in Hong Kong.  People call him ‘The Little Godfather’”) uses a short-circuiting electrocardiogram machine to frazzle a hitman disguised as a doctor; and stuffs another attacker headfirst into a blazing fireplace – while over-amped sizzling noises are heard on the audio track! – holding onto his victim until the body stops twitching.  Fight choreography is pretty damn good by mediocre kung fu movie standards.  Liang high-kicks a gangster (stunt actor Fortunato Arena) in the head during a parking lot altercation, and mops up the set with a pair of “Russian” surly-burlies (seasoned spaghetti westerners Claudio Ruffini and Lorenzo Fineschi, both also stuntmen) who harass him during his movie shoot, including making racist remarks (“He’s scared… he’s yellow!”).  Corrigan’s also no slouch with her fists and feets.  Liang’s secondary love interest is provided by the film-within-a-film’s leading lady Lily (the raven-haired, blue-eyed Maria d’Incoronato), whose death-screams are drowned out by hard rock blasting from a car radio. 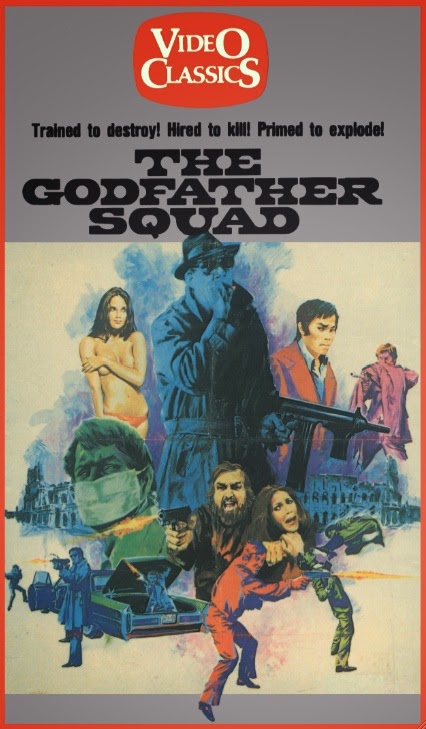 Before you can say unexpected turnaround, Don Caro and Wang dismiss their mutual feud for the sake of a $2-million diamond deal with the Hill Gang (“I just pulled the old switch trick!”).  But vendetta ever runs deep…on both sides.  For Liang’s ‘epic’ cross-country kung fu duel with Chong, right in mid-stride the locale inexplicably changes from sunny downtown Roma to alpine Asian countryside heavy with fallen snow (!!!).  But even a razor-sharp ace of Spades can’t save Chong’s worthless neck, and it’s time for the little godfather to face the big one…

In spite – and perhaps because – of some hilarious overacting (especially from Mitchell and Cutini) which doesn’t hurt the basic entertainment value one bit, LITTLE GODFATHER FROM HONG KONG amounts to a surprisingly watchable, fast-paced and at times gleefully violent piece of trash exemplifying the short-lived crimeslime / chop-socky crossover.

For those living in the USA, this is still available from Code Red.  All others have to try their luck on Ebay or Amazon since they don't offer international shipping.
Posted by Dennis Capicik at Sunday, October 26, 2014