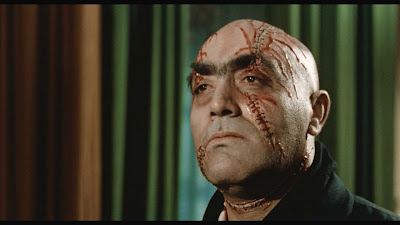 Outside of some dubious DVD bootlegs, directorial one-timer Mario Mancini’s lowly, schlocky splatter flick FRANKENSTEIN ’80 (1972) has – during this the still-ongoing digital age, at least – remained conspicuously absent in anything even close to resembling a passably watchable version. But now, thanks to Germany’s ’84 Entertainment, this unabashedly seedy, skeezy and sleazy Italo-horror finally gets a real first-class presentation on their fine-looking Blu-ray / DVD Mediabook. 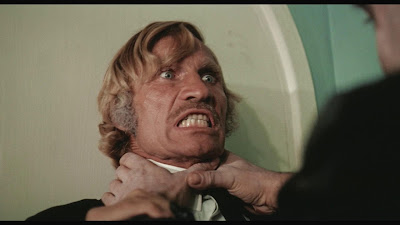 Top surgeon Dr. Rudolf Schwarz (Bob Fiz) has developed a revolutionary anti-lymphocytic serum, which is supposed to help (quote) “modify the morphological picture and avoid rejection” during organ transplants. Apparently, this serum – which looks a lot like blue mouthwash, and quite possibly was! – is so innovative that it’s the only one of its kind in the entire world (!); and which, of course, shortly gets stolen from Schwarz’s office by a mysterious nocturnal intruder, right when the good doctor – and especially his current patient – needs it most. Enter Karl Schein (John Richardson, whose character name, despite what both the cast-crawl and IMDb say, is actually clearly repeatedly heard being pronounced more like “Schellen” [sic?]). Schein is a reporter assigned to the (quote) “crime news desk” at some unspecified local newspaper, and is visiting his terminally-ill sister at the hospital, who is awaiting an urgent heart transplant c/o of Doc Schwarz, and will surely soon die without one.  Due to that mysterious third party having absconded with Schwarz’s crucial serum the night before, Karl’s sister dies not long after her operation when her incompatible physiognomy rejects the donated heart, so her grieving brother – who doesn’t really seem all that bothered by her ‘tragic’ demise, quite frankly (chalk it up to underacting ‘star’ Richardson’s bored lack of interest in the material!) – is put on the (quote) “Schwarz serum case”, a special enquiry which leads him to the hospital’s head pathologist, Dr. Otto Frankenstein (Gordon Mitchell) and his misshapen, stitched-together – and sexually voracious – monster, whom/which his creator has dubbed Mosaic (Xiro Papas). Incidentally, you’d think that any hospital which would hire-on an employee named Frankenstein (who makes no effort whatsoever to disguise his identity by simply assuming an alias) in a capacity which gave him free access to all the dead patients’ body parts might at least be suspicious of his motives and keep an eye on him, especially after hours… but apparently not! 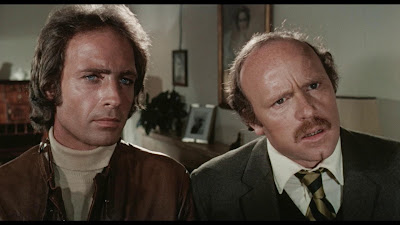 Bearing some passing similarities to Mel Welles’ vastly superior LADY FRANKENSTEIN (1971), starring Rosalba Neri, Mickey Hargitay and Joseph Cotten, this micro-budgeted modern-day retelling of Mary Shelley’s most famous work – which was produced in ’72 but evidently meant to be set in the ‘future’ year of 1980 – is every bit as piecemeal as Frankenstein’s human jigsaw puzzle Mosaic in the film. As intriguing/puzzling as its ‘futuristic’ title is, most of this film’s running time is devoted to Mosaic its ‘Modern Prometheus’ simply roaming the streets of an unspecified European city (in what was evidently intended to be Germany, judging by the excess of Teutonic names in the cast of characters; although an olive-green Giulia polizia cruiser pegs the true location as being a whole lot closer to home in Mamma Italia). Rather than merely wandering aimlessly, Mosaic goes off searching for women and fresh body parts, much to his master’s chagrin. “You’ve got to stop killing! I’ll get you the organs you need! exclaims Dr. Frankenstein, alarmed by his cobbled-together creation’s increasingly murderous and uncontrollable behavior. Bald-pated, with big bushy eyebrows and sporting fresh surgery scars all over his face and body – as an ill-fated, short-lived hooker discovers, much to her horror – Mosaic also wears a Gestapo-like black leather trench-coat and black fedora hat (and a rather goofy one at that!) which makes him look like some wannabe ’40s-era hoodlum with a leather fetish. Unable to speak beyond uttering a few unintelligible grunts and groans here and there, he somehow still manages to pick up the odd unwary prostitute (“What’s the matter with you, eh?” asks one. “You made-up for Halloween?”), who definitely get more than they bargained for when they take this ‘john’ home to their bedsit. 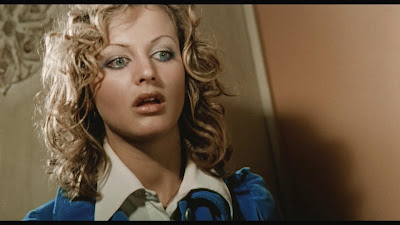 Like the protagonist of some third-rate giallo, our disinterested hero Karl snoops about both figuratively and literally in the dark, and along with Schneider (Renato Romano), a very frustrated police Inspector (“Give me the essence of it! The juice, ya know?!”), they discover Dr. Frankenstein’s laboratory, which is secretly – laughably enough – hidden behind a swinging partition within the very hospital itself. Later in the film, when Insp. Schneider is unable – or more likely just can’t be bothered – to put out an APB on the rampaging monster, due to a lack of the required Schwarz serum to keep Mosaic’s organs functioning properly, they simply wait for them to be rejected and fail. In the meantime, Mosaic goes on a continuous killing spree while the police sit back twiddling their thumbs and biding their time, if nothing else doing their bit to pad the film out to an, um, ‘respectable’ running length. Another purely extraneous bit of business involves ‘special guest star’ Luigi “Gigi” Bonos, the then-sole-surviving brother of the once-popular Fratelli Bonos acting trio (he too passed away in the year 2000). A seasoned specialist at playing stock comedic characters, Bonos herein cameos without saying a word as a grubby old vagabond who has a particularly unpleasant (and fatal) encounter with the man-made monster and a large, heavy car part in an auto graveyard after dark. 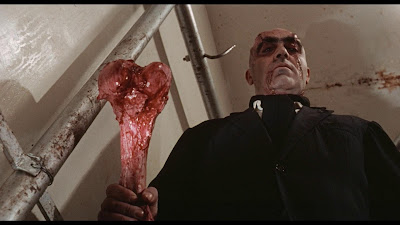 Clumsily-executed across the boards and strung-together with only the flimsiest of plotlines – albeit still highly entertaining nevertheless – FRANKENSTEIN ’80 represents usual cinematographer Mancini’s sole endeavour as a director. He was actually a fairly prolific DP on many a low-budget Italian film and, again in 1972, he also worked in that capacity on F.L. Morris’ (a.k.a. Ferdinando Merighi) equally shoddy giallo, THE FRENCH SEX MURDERS (1972); it too features the same economical and garish lighting schemes, which comes as quite the surprise in the case of the present film, since it was shot by no less than Emilio Varriano, one of Mario Bava’s most trusted camera operators (who, two years later, went on to lens Bava’s claustrophobic, nail-bitingly suspenseful crime thriller RABID DOGS [1974]). Talented composer Daniele Patucchi also provides a fun, if wholly appropriate, piano-driven score, but he also reuses a cue from his languid, easy-listening score to Elò Pannaccio’s IL SESSO DELLA STREGA (1972). Following a drawn-out peeler act at a stripclub, bits of Patucchi’s score for Carlo Croccolo’s low-end Klaus Kinski spaghetti western BLACK KILLER (1971) can also be heard. 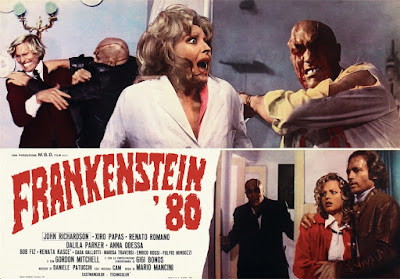 Beginning with a disclaimer about the film’s new HD transfer, some (quote) “short scenes were no longer available on 35mm film and had to be inserted from an inferior source”, which in this case was a grainy VHS videocassette. Apart from these thankfully-only-brief inserted scenes (including longer-lingering extra bits of nudity and gore), which jar quite noticeably with the bulk of the film’s transfer print proper, ’84 Entertainment’s Blu-ray is most definitely worth the upgrade. Miles better than any other version on the market, all of FRANKENSTEIN ’80’s previously problematic day-for-night scenes come through just fine here, and will serve as a real revelation to anyone familiar with Gorgon’s long-out-of-print, badly pan-and-scanned fullscreen VHS tape. Detail on the Blu is excellent, with stable, robust colours, an aspect which only helps better accentuate all the glistening viscera and stage blood on display.  This is also the first time (at least to English-language viewers) that the film has been made available in its original widescreen aspect ratio, which makes for a far-less-confining and claustrophobically constricting viewing experience all round. The LPCM 2.0 audio is also available in both German and English language options, although the English track does feature some audible hiss, but overall it sounds just fine in light of the film’s obvious relatively primitive technical attributes, whose shortcomings would have been apparent enough (perhaps more-so) even on the film’s original theatrical release. 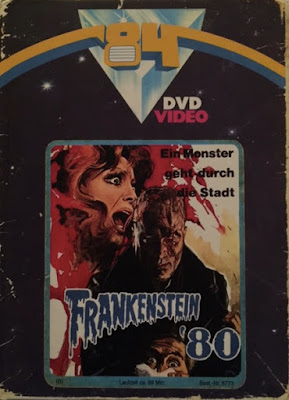 Extras include a fairly beat-up, but most-welcome original trailer, with some brief German narration; alternate opening credits from the U.S. and German (as MIDNIGHT HORROR) VHS versions (3m30s), which really makes you appreciate just how fine this new transfer is; a brief gallery (1m07s) of the entire set of Italian fotobuste; plus ‘lost film scenes’, which are all the extra inserted scenes, including surrounding context (3m55s). Apart from one extra brief artwork gallery (57s) of video and promotional art present only on the DVD, both discs include the same transfer and extras. Available in three separate Mediabook editions, Cover A (limited to 333 copies) features a nice, retro-styled rendition of the film’s original German VPS (Video Program Service) VHS videocassette, while Covers B (222 copies) and Cover C (250 copies) feature, respectively, the French Mike Hunter VHS artwork and French theatrical poster art.
Posted by Dennis Capicik at Saturday, October 21, 2017