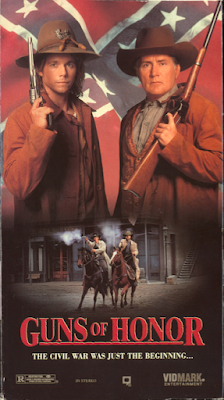 VHS/Beta videotape ad-hook: ‘The Civil War Was Just the Beginning.’

‘French’ non-com, with thick Afrikaner accent: “There’s only one thing I hate worse than a wise-ahse injun, an’ that’s a wise-ahse halfbreed!”

The even shoddier “sequel” (of sorts) to TRIGGER FAST, which was shot back-to-back with it in 1993 (albeit this time directed by Peter Edwards rather than TF’s David Lister). Again based on J.T. Edson characters and likewise filmed on location in South Africa – this time out posing as Mexico – the same coproduction companies, main technical crew and cast were also involved hereon. Due to the fact that native actor Jürgen Prochnow is billed on the top line (even if he is barely even present!), some minority German production funds might well have been involved in here somewhere too.

The story is set in 1866 Mexico during the armed insurrection against Emperor Maximilian and occupying French forces. Now that the South has surrendered to the North and the American Civil War has been declared officially over, a number of Rebel loyalists – regarded as outlaws by the newly-instated U.S. Government – have fled down Mexican way. Hence, fearing a French-led incursion onto American soil, ex-Reb soldiers Dusty Fog (Chris Atkins again) and his trusty, crusty senior sidekick (Martin Sheen again) head south of the border to bring their prodigal greycoat comrades-at-arms back home to lend an assist with unifying the North and South and opposing the potential French threat. If that grandiose plotline sounds way too ambitious for a movie of such limited resources as this one had at its disposal, that’s because it most definitely is, so don’t be expecting GUNS OF HONOR to come anywhere even close to fully visualizing it… not by a long shot.

Most of the same stars all return here, although other than for the dusty-dustered Atkins (“The name’s Fog. Dusty Fog” – Yep, he actually repeats this same introduction from the first instalment!) they mostly seem to be playing different characters this time out. That is to say they’re playing basically the same characters as before – even right down to their same costumes – only this time some of them seem to have different names. As before, there are simply way too many guys all playing at antihero. After only getting to participate in a single shootout, Sheen (“Oh God, I’m gettin’ old!”) stops a belly shot and is laid-up (i.e., put out to pasture) for the remainder of the running time. And, despite his name receiving prominent billing right in the opening credits, American actor Corbin Bernsen is literally nowhere to be seen in the entire film! Instead – and I kid you not – we get a ‘lookalike’ (!?) posing as the actor! Top-billed Prochnow – who is only onscreen for a few minor scenes – plays a Reb sergeant with a black dog named Boris (who was seen killed in the first film; go figure!). An unappealing pretty-boy in a black leather coat plays a so-called Mexican-Indian halfbreed known as “The Cuchillo Kid,” whose namesake is a big Bowie knife (“I’ll slit you from your groin to your throat!”).

The same problem of too many cooks also applies to the villainous faction: which includes a smarmy French army captain named Bourdeaux and his sadistic subordinate, along with a sombrero’d, poncho’d (quote) “Yankee half-Mex” named Giss (Frank Notaro). Everybody – Reb, Yankee, Frenchy and Mex alike – is out to get their hands on a contentious shipment of lever-action Winchesters which are mentioned a lot but never actually shown (which is perhaps a good thing as, within the film’s historical timeframe, the repeating rifle hadn’t been invented yet, so might have appeared as a conspicuous anachronism!).

Logically enough one presumes in a nation whose government had up until only recently fully supported a racist Apartheid régime, supporters of the Confederacy of Southern States are here depicted as heroic characters, albeit antiheroic ones. Union sympathizers on the other hand are uniformly presented as arrogant, troublemaking louts. In this movie, anybody wearing a bluecoat is considered the enemy: which means both the Northern American and French troopers (as trusty Dusty says, “...blue always looks better with a splash o’ red” [i.e., blood]). ‘French’ troops are all played by thickly-accented South African actors, presumably because the casting director figured if they sounded ‘foreign’ enough nobody would notice the difference anyway. The only black person briefly glimpsed throughout is a male labourer who politely addresses whitemen as “Sir” in-between lugging sacks of grain on his back. Just about the only performance with any real enthusiasm to it is the bald, fat, white character actor (Bill Flynn) playing Almonte, hearty leader of the bandit revolutionaries, who – without really looking very Mexican at all – actually manages to fake a fairly natural-sounding Hispanic accent.

While largely shot with live sound, certain scenes – especially those involving an aging Confederate general (Bernsen’s uncredited ‘body double’!?) – seem to come with post-synchronized dialogue. There are plenty of mindless, chaotically-staged shootouts; including one with our heroes cornered inside an adobe jailhouse. Two scenes involving female nudity stay strictly above-the-waist. A totally gratuitous one in which a thug beats-up a screaming topless woman as an overture to (off-screen) rape is right out of a US “roughie” western.

It all has that generic veneer of slick but lifeless sub-mediocrity so common to cheap direct-to-TV / video filler product. Originally made for airing on cable television, even on VHS tape copies the screen periodically fades to black to allow for convenient insertion of commercial breaks. Not that one imagines too many K-Tel Veg-O-Matics or Craftmatic Adjustable Beds went out the door on account of this dud. Indeed, certain types of infomercial might very well make preferable viewing! However, that said, regardless of its shortcomings in dramatic/aesthetic (etc.) areas, GUNS OF HONOR does stand as a fascinating example of tawdry cut ’n’ paste filmmaking at its most desperate. Hell, despite the drubbing I give it above, I actually enjoyed it a lot! J