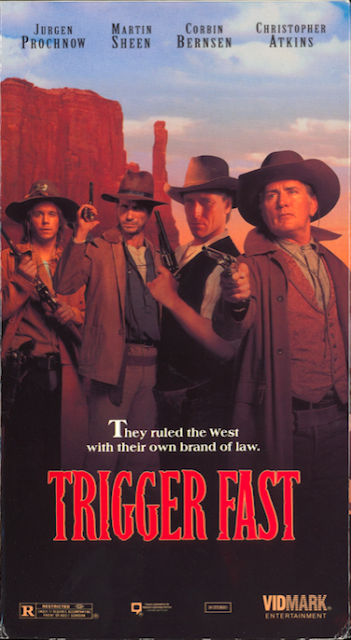 Corbin Bernsen as the malicious Malick: “Blood or money; it’s all the same to me...”

Christopher Atkins, trying-on his damnedest Clint Eastwood: “Whose blood? Y’know, a man oughta think real hard before he gambles with stakes he can’t afford to lose.”

Ron Smerczak as Malick’s head henchman, Tring: “No, I ain’t the Marshal. But around here, I is the Law! ...Hope you’re as fast with that gun o’ yours as you are with ya mouth!”

Jürgen Prochnow as Jack: “Damned [sic] him ...the dirty bastards!”

US vidbox copy: ‘...all-action, trail-blazing adventure set in the post-Civil War West...’
...But actually shot in the southeast – waaay southeast! – in South Africa (produced in association with Safritel [Johannesburg] and Lluniau Lliw [Wales]). Not surprisingly, no doubt as much for political as for geographical reasons, the film’s South African location goes unmentioned in the credits (at the time of its production in 1993, Apartheid had yet to be officially abolished; that didn’t happen until the following year. Tellingly enough, TRIGGER FAST didn’t see a domestic North American video release until July of ’94, mere months following the oppressive 30-year regime’s final downfall). In addition to S. African monies, the production was jointly co-bankrolled by both US and British companies, making this a real cultural mishmash indeed. Its script was based upon Brit western writer J.T. Edson’s bestselling series of pulp western novels starring “The Floating Outfit” (this made-for-cable filmization directed by David Lister was released in many Anglo territories as THE FLOATING OUTFIT: TRIGGER FAST, but under the above shortened title on North American videotape).

The setting is the ‘American’ post-war South, 1865. For being late with his “taxes,” cattleman Jack Newman (German-born Prochnow, who here at times evokes Gordon Mitchell), finds several head of his beef killed by poison weed which has been introduced into their waterhole (“...dirty bastards...”). Freida LaSalle (Walker Brandt) is a young lady rancher also victimized by exorbitant taxes imposed by local would-be monopolist land baron Brent Malick (Bernsen), who heads a gang of U.S. (i.e., Union) Army-appointed cutthroats. For his master’s defiance, Malick’s marauders shoot Boris down like a dog (which is most appropriate, because he is a dog), then torch the Newman homestead to further emphasize their point. Before vamoosing, head Yankee henchman Tring (Smerczak) pops three or four bullets into Prochnow: hence, so much for our top-billed star, at just over seventeen minutes into the movie!

Playing one Jackson “Old Devil” Baines, Martin Sheen appears puffy-cheeked and out-of-his-element/comfort zone under week-old facial overgrowth and dusty rawhide. Having been drawn into Newman’s feud with Malick, before disappearing for the duration himself, the second-billed Sheen summons gunslinging Rebel war vet Dusty Fog (!) to save both the ranchers and a few dollars more on casting costs. Malick’s malchicks serve Miss Freida with an eviction notice and she is given only seven days to pay-up in full five years’ worth of back taxes. Leave it to trusty Dusty and his two saddlebum chums to throw-in their lot with the damsel-in-distress.

Everything herein mostly appears synthetic, from the affected accents to the way supporting actors wear their hats and period costumes. However, to help take our minds off all the incongruities, our leading lady enjoys (as do we!) a topless bubble bath in a horse trough. Naturally, co-star Chris Atkins and his other young guns just happen to ride up before she’s had proper time to towel herself off. Atkins may know his way around the West and a Winchester, but he sure as shootin’ can’t pronounce Mexican names worth guano (for instance, he addresses his own ethnic sidekick as “Mig-well,” while Miss Freida calls him “Mig-hayle”; but at least somebody gets it right in time for the end-credits!). Such pronounced mispronunciation has seldom been heard since another South African pseudo-spaghetti, namely THREE BULLETS... FOR A LONG GUN. To make matters worse, Miguel looks about as Latino as Kyle MacLachlan and sounds completely gringo, even while speaking in his ‘native’ lingo (“Si... Adiós, señorita”). His paisano down at the saloon betrays his own national origins only by saying “greeng-ko” a couple of times. When Miguel asks him, “Do you ever worry about me?” for some reason Dusty answers “Only when you’re behind me!” (one presumes that Migwell might well be – for wont of a better word – a ‘backshooter’?).

At first sight, co-star Atkins looks a lot like Italo spaghettvet “Rick Boyd”/Federico Boido (elsewhere, a tertiary Union gangmember purely coincidentally resembles Nello Pazzafini). Rather than any conscious dramatic contrivance, Atkins’ laidback, laconic exterior (“My name’s Fog. Dusty Fog”) is more attributable to his basic inability to act the part with much conviction. The son of a Texas Ranger, not only does Dusty carry two guns slung backwards in his belt, but his trigger-fast fingers noticeably ‘itch’ (i.e., wriggle) to intimidate his opponents before every confrontation. When Malick’s men attempt to re-brand the posthumous Prochnow’s unlawfully repossessed cattle, Atkins sticks the smoking iron in a rustler’s face, then bellyshoots the wildly overacting (non-)Mexican.

Boss heavy Bernsen (“Damn Yankee!”) puffs on a fat cigar and speaks as though he’s got 57 miles of barbwire stuck in his craw; but his slicked-back performance beneath a stiff fedora and silk waistcoat might better fit into a modern gangster pic. In an uncomfortable development that may well have had something to do with the movie’s part-Apartheid origins, it is Rebs who play the antiheroes (“No damn Yankee’s gonna force me off my land!”); leaving the damn Yankees to fill most of the non-sympathetic roles. Beneath his on-again / off-again Confederate accent (“The bastard wouldn’t dare!”), Bernsen’s onscreen kid bro Jeb (Jeremy Crutchley) sounds and looks suspiciously like an English Gary Oldman wannabe. Screenwriter Paul Matthews’ contrived ‘tough’ talk (e.g., “You just cost me three good men!” – “Well then, I guess they weren’t that good”) rarely has its desired effect, instead provoking misplaced horse laughs. One saloon rowdy takes so long winding-up to clobber another with a whiskey bottle that the guy only has about a week to jump outta the way... but doesn’t.

Another problem – trying to lend a 96m. feature the epic sweep of, say, a LONESOME DOVE – is an excess of characters, with about six different ‘alpha male’ actors, including Gerard Christopher and Todd Jensen, all vying for top antihero slot (see also C.T. McIntyre’s low-budget 1990 US oater BORDER SHOOTOUT, which shares a similar “too-many-cooks” issue). About an hour in, still another late-coming young gun arrives to further dilute the broth. Most of the film’s derring-do is reserved for these lower-priced (and -aged) players. Simply because of their baby-faced boyishness, none of the many junior protagonists come across as very threatening (as Sheen says, “You sure are the sorriest-lookin’ bunch I ever did see”). Due in large part to their greater age and acting experience, the Malick and Tring characters (latter not unlike some escapee from R.L. Frost’s 1969 “roughie” western THE SCAVENGERS) exude far more menace; although Bernsen’s sudden transition to bullwhip-cracking madman / wannabe brother-killer is much too perfunctory to convince and provokes snorts of amusement rather than shocked gasps.

The Cain-slew-Abel conclusion (“I didn’t think you could do it...” – “Why not? I’m your brother!”) recalls the similar one in “Sidney Lean”/Giovanni Fago’s far superior genuine spaghetti western VENGEANCE IS MINE [Per 100.000 dollari t’ammazzo, 1967], starring Gianni Garko and Claudio Camaso as half-brothers involved in a volatile love/hate relationship that doesn’t end well for the latter). In the present film, blazing-orange photography of torched barnwood recalls analogous imagery from such real spaghettis as Giulio Petroni’s DEATH RIDES A HORSE (Da uomo a uomo, 1966) or “Anthony Ascott”/Giuliano Carnimeo’s HAVE A NICE FUNERAL, MY FRIEND (Buon funerale amigos!... paga Sartana, 1970). And there’s as many gratuitous bare siliconed breasts on display here as in Jim Wynorski’s T&A western HARD BOUNTY (1995), which is cheaper-made but better (and not necessarily just because it’s all-American, either).

All this and Boris the mutt too, a kind of distant bastard grandpup of Lassie and Rin Tin Tin. Speaking of dogs, that seems like the ideal place to end this...

Notes: Music by Shuki Levy and Stephen C. Marston mostly stays in the background and could have used less (i.e., zero) synthesizers and a big pinch of garlic; some twangy guitars and whistling (etc.) in the mix might also have worked wonders, although there’s only so much can be done to improve weak material like this. Co-producer was Hollywood’s Saban Entertainment, who frequently import low-cost foreign-made TV fare into North America. The even worse sequel was GUNS OF HONOR, which I’ll be covering next time.
Posted by Dennis Capicik at Monday, May 02, 2016