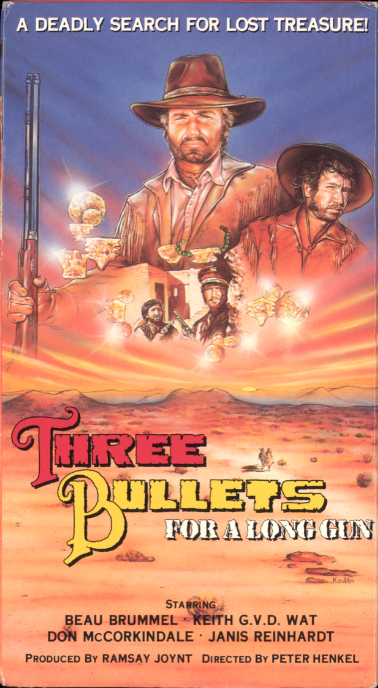 I originally saw this off-the-wall, from-out-of-left-field South African oddity from 1971 on late-night Toronto television circa the early ’90s, but during the same period it was domestically available on VHS cassette from both Charter Entertainment and Simitar Entertainment.  Evidently pointing to at least some sort of “cult” popularity on its part, the film was also released on home videotape in a number of other international markets (including by Video For Pleasure of the Netherlands under the title DRIE KOGELS VOOR EEN LANG GEWEER, which is merely a literal Dutch translation of the original Anglo title).  Ironically enough, THREE BULLETS…FOR A LONG GUN was often passed-off as an American-made (!) film in Italy, where it was released under the classically spaghetti-sounding title EHI AMIGO! TOCCA A TE MORIRE (“Hey, Amigo! It’s Your Turn To Die”).  The film’s director Peter Henkel also made SCOTTY AND CO. (1970), yet another even-more-über-obscure Aparthied western made the year prior to our present title.  Not that many people likely wanted it, but an equally-threadbare sequel to THREE BULLETS was produced in 1973, entitled THEY CALL ME LUCKY, which has been blatantly misidentified in at least one foreign export market (and probably more!) as a “Spaghetti Western”; however, like the present film under review, it’s really merely a thin quasi/pseudo pretender that’s mainly of note for that reason alone, as a strange ‘pop-cultural aberration’ (for wont of a better term).

(There now follows a brief synopsis of THREE BULLETS’ plot, so those who wish to avoid spoilers might want to skip the rest of this paragraph!)  In Mexico, a suddenly-appearing stranger guns down a number of soldiers who are about to execute a bandido named Lucky for his refusal to divulge the way to a stash of gold loot.  Nicknaming his savior the “Major,” Lucky and the stranger ride to track down the treasure by means of a tattered map and two silver lockets.  Lucky, mistrusting him, knocks Major unconscious and makes his escape, only to run right into the clutches of Hawkeye, a cyclopean (i.e., one-eyed) bandit leader and his gang.  ‘Inviting’ himself into Hawkeye’s camp, Major avoids a sneak attack by the bandits.  When a mute girl – one of Hawkeye’s ‘harem’ – mistakenly shoots him, the Major winds up spread-eagled between stakes in the withering desert heat.  Hawkeye tortures Lucky and forces him to lead him to the gold down-river.  Having been cut loose by apologetic mute girl, Major blasts Hawkeye’s raft with a careful bullet to a powder-keg, then knifes Hawkeye.  Moses – whose right hand has been crippled by Major – along with the vestiges of Hawkeye’s pack, pursue Major and Lucky to a deserted pueblo.  They wipe out the remnants of the gang during a heated shootout, then Major squares off against Moses, whose right hand he has crippled during an earlier encounter (“Hey, Major, I forgot to tell you.  I’m left-handed!”).  When their hard-won gold is not found in its rightful place – buried in Papa Gómez’s grave – Major and Lucky push onward to a site in the mountains, 25 miles south of Capricorn.  Down a deep mine shaft, Lucky uncovers twin chests that have laid safely hidden for fifteen years alongside the remains of Pete, a former unsuccessful treasure-hunter. (I shan’t reveal the ‘twist’ closing revelation…)

Setting the sights of their own long gun high, the producers of THREE BULLETS were initially interested in obtaining none other than Clint Eastwood himself to star in this ultracheap knockoff, shot in South Africa, near Praetoria.  When they could not meet Eastwood’s lofty salary request however, he reportedly bowed out of doing the picture (presumably only his agent had any contact – if any! – with the producers).  Instead, Eastwood threw himself into starring in his first self-directed feature, the well-regarded fatal attraction thriller PLAY MISTY FOR ME (1971).

Monthly Film Bulletin, regarding THREE BULLETS…FOR A LONG GUN: “Never more than a pale imitation of a mid-Sixties spaghetti Western… [it] lacks the entertaining combination of heavy portentousness and cleverly paced throw-away violence which characterized the best of the genre… In a lame reprise of Clint Eastwood machismo, Beau Brummell… attempts to cast the nameless ‘Major’ in the same mould as the enigmatic gunman of A FISTFUL OF DOLLARS.” (Good luck to that, amigo!)

Clearly Leone’s The GOOD, THE BAD AND THE UGLY was the main role model (I hesitate to say “inspiration source”) here; but there all similarities end, it rather goes without saying.  The prologue, virtually bereft of dialogue, imitates the Spaghetti style very closely – albeit more simply parrot-fashion than with any degree of either originality or individuality – as Brummell (“You!”) oversees a fair-and-square pistol duel between the major of a firing squad and Keith van der Wat as the bandit.  Only after the major has crumpled and Brummell has told the bandit to “Bury him!” do the credits commence.

Brummell ‘crowns’ himself a makeshift major – hence the nickname bestowed upon him by Van der Wat – when he salvages and thereafter wears the peaked cap and tunic of a dead Federale officer.  Van der Wat – who also penned the scrappy script – gives a colourful ham-in-fist performance as an apparent Mexican of Italian upbringing (for instance, he pronounces the “c” in Luciano with the hard “ch” sound of italiano rather than the softer “ss” sound of español).  But then, his namesake is an Italian-American gangster, after all!  (Even if such an inclusion is a total anachronism, as, at the time  when the film is set the real Lucky Luciano hadn't even been born yet!) Instead of the more logical and Hispanic sounding “Myyor,” Luciano refers to Brummell’s character as “May-jor,” in two hard syllables.  As opposed to the more typical “¡Madre de Dios!” Lucky instead exclaims “Madre mia!” – an inventive hybrid of Spanish and Italian.  On second try, he almost gets it right (“¡Madre de Dos!”[sic]), then blows it again by going completely Italian (“Mamma mia!”).  Then again – but I wouldn’t bank on it – perhaps all this linguistic laxity was intentional, with scriptwriters simply lampooning the mutant paella / spaghetti origins of a great many Euroater co-productions.  This said, not-so-cunning linguist Van der Wat would have perhaps done well to study the mighty Fernando Sancho’s by then already rich legacy of bandido performances and taken some pointers (e.g., at least throw in a hearty “¡Vamonos, muchachos!” here and there).

Born in South Africa in the 1940s, Brummell derived his name – presumably just a pseudonym? – from 18th-Century English dandy, George Bryan “Beau” Brummell.  Also a recording artist (though of course not to be confused with famed ‘60s San Francisco psych-pop group The Beau Brummells!), in his homeland Brummell eventually went on to found the self-named Beau Valley nudist colony, which gained some notoriety (2/93) in the eyes of the then pro-Apartheid government for openly offering membership to both blacks and gays.  During the ‘80s, Brummell released a number of nudism videos, including one called ONCE WE WERE NAKED (‘Naturists at their most natural – among the wild animals of the African bush’).  He is apparently related to Celia Brummell (his sister?), who appears in the cast of this his sole pseudo-spaghetti, which stands as an opportunistic, oddball and amusing cultural aberration.  According to the IMDb, which has no bio information whatsoever about him, the present film remains Brummell’s only motion picture credit (in addition to starring in it, he also wrote its original story).

Brummell makes no effort whatsoever to disguise his distinctive Afrikaans / English dialect herein.  “With my luck and your brains, we’ll be reech!” says Lucky more than once.  Rather than plug a flying silver dollar to show off his marksmanship, Brummell shoots a peanut into two equal halves, both nuts left unscathed and removed from their shell (after all, he is the man with the long gun).  Brummell frequently signals his presence via a fistful of peanuts (undoubtedly the total cost of this threadbare open-air production, which uses few real settings and only minimal cast).  After an informal hand of poker, it is revealed that all 52 cards in the deck are aces (a feat seldom topped even in the post-TRINITY oatcoms)!  Overacting hideously, Patrick Mynhardt physically rather resembles British actor Jack Hawkins and plays Hawkeye – no relation to James Fenimore Cooper’s legendary “Deerslayer”! – with an accent of indeterminate ethnic origin (German? Polish? Venusian?).  Because Brummell had caused him to lose his right peeper, Mynhardt demands an eye – or two – for an eye in recompense (“…he won’t be left with one eye. The vultures will take both!”).  The same actor also appeared in two other Apartheid oaters, namely Ken Annakin’s The HELLIONS (1961), which was a joint-job with the UK, and Robert D. Webb’s The JACKALS (1967), starring an out-of-his-element (i.e., miscast) Vincent Price as a dotty old gold prospector.  That latter film was an official if decidedly downscale remake of William Wellman’s classic apple pie western YELLOW SKY (1948).

As the bullwhip-snapping “Moses” here, Tullio Moneta – of Italo descent? – breaks several Commandments and sometimes resembles Italian characterman Raf Baldassare (“Don’t look to Heaven for water… it didn’t rain for four years!” – “You’re wrong, Moses… eight years!”).  The actor speaks with a Latin accent, recorded in real time rather than dubbed on, as per the norm in the genuine article.  Left-handed Moses is dropped by a bullet to his right-hand eyebrow and takes an unceremonious nosedive into an open grave.  Interestingly, a number of the cast were either true first-generation Europeans, or else simply South African nationals affecting spaghetti-like names (that’d be a switch!).

Attempts at artiness are made, as when Brummell – moving slow-motion amongst a carpet of bouncing apples – blasts Hawkeye’s camp to bits, ‘stylishly’ intercut with closeups of Van der Wat’s laughing face.  Certain low-angle, almost ‘3-D’ shots here resemble test footage for Ferdinando Baldi’s COMIN AT YA!, starring Tony “The Stranger” Anthony.  Soundtrack consists of mariachi-laced orchestrations and psychedelic jazz.  When Brummell’s carefree Tom Jonesey ‘trail ballad’ kicks in (sounding about the equivalent of your average Gene Autry song), it jars badly with the violent – albeit light-hearted – tone of the film, giving the proceedings a bit of a schizo feel.  Nods are repeatedly made to the Italianate variety: the token ‘religious’ connotations of a character named Moses; Lucky crossing himself and rolling his eyes skyward after each of Major’s kills; the loot supposedly buried in the murdered father’s grave; as well as Major’s superstitious foible about Lucky’s “lucky” three rifle slugs (hence the title).

A real lo-o-ong shot for sure, this Boer western is mostly just a large bore; but in purely historical terms makes for an interesting and unique novelty that more hardcore fans of genuine spaghetti westerns (if that’s not an oxymoron) may derive some entertainment value from.
Posted by Dennis Capicik at Tuesday, January 27, 2015