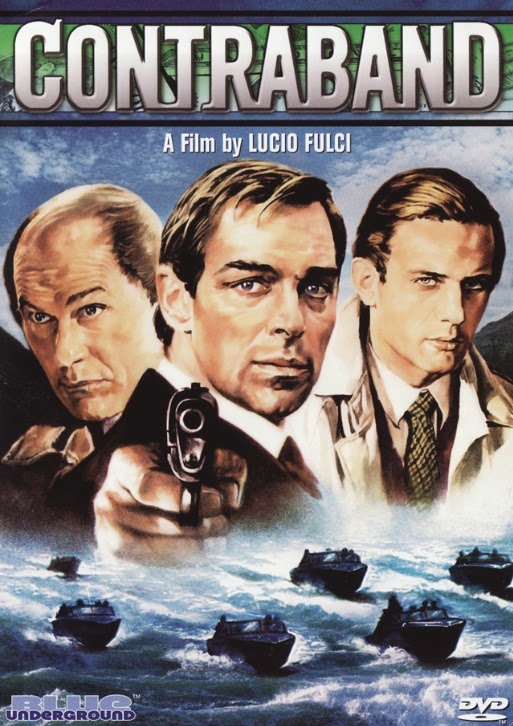 Despite the apt description, MEAN BLOOD was one of the many alternate release titles for Lucio Fulci’s CONTRABAND (1980).  This was producer Sandra Infascelli’s next big Italocrime production following Umberto Lenzi’s FROM CORLEONE TO BROOKLYN (1978) and, like Fulci’s ZOMBIE (1979) was originally proposed for direction by Enzo G. Castellari, who had just wrapped DAY OF THE COBRA (1980) with Franco Nero.

Original Italo pressbooks inevitably compared CONTRABAND to William Friedkin’s The FRENCH CONNECTION (1971); and that film’s prime villain, Marcel Bozzuffi, here plays “the gangster from Marseilles who unleashes the chain of violence.”  Fulci’s contribution to the Italocrime genre is your standard tale of camorra in-fighting and revenge, but what sets this film apart is a generous amount of gory violence that rivals anything done in his much-discussed/praised cannibalistic zombie flicks.  Sandwiched between his “gore classics” ZOMBIE and The GATES OF HELL (1980), this actually turned out to be Fulci’s only crime film as he quickly progressed into the internationally successful horror director he has since become.

When Luca (Fabio Testi) and Mickey (Enrico Maisto) are almost apprehended smuggling cigarettes via speedboat off the infamous Naples docks, they are convinced that a rival smuggler, Sciarrino (Ferdinando Murolo), has ratted them out.  They plan on teaching Sciarrino a valuable lesson with the help of Luigi Perlante (Saverio Marconi), a hot headed but powerful gangster (who, according to original pressbook copy, “personifies the power of today, that power which has been handed down from the elders to the younger generation”).  However, Mickey is killed the following day and Luca quickly realizes that Sciarrino wasn't involved in any of the dirty business.  It was actually the work of Francois “The Marsigliese” (Marcel Bozzuffi), a French drug kingpin out to replace the prosperous cigarette trade with a stronger addiction …heroin.

As mentioned earlier, CONTRABAND is similar in concept to any number of polizieschi or camorra pics that take place on the Neapolitan docks (the Mario Merola/Alfonso Brescia collaborations come to mind), but the main reason for the film’s continued popularity – especially among fans of Fulci’s horror pics – is the inordinate amount of gore.  Heads are blown apart, burnt, thrown into lime-pits etcetera, etcetera.  When Perlante is shot through the neck, his wound gushes massive amounts of blood and is comparable to anything in ZOMBIE or Fulci’s pièce de résistance, The BEYOND (1981), but despite the all the gore, the film is also considerably more hostile and misogynist in tone than your average poliziesco.  When Luca stubbornly refuses to join the Marsigliese, his wife Adele (Ivana Monti) is kidnapped and brutally raped by a couple of his goons (including spaghetti western vet Romano Puppo) as Luca helplessly listens on the phone while Fulci’s camera continues to linger on the act as if were one of his gory set pieces.  It’s one of the more unpleasant scenes in Fulci’s entire oeuvre right up there with his very own, and equally distressing, The NEW YORK RIPPER (1982).  In another highly exploitive scene, the Marsigliese catches a young drug mule trying to sell him some cheap diluted smack and, in a sadistic rage, he viciously blow torches her face and gleefully watches as it slowly melts away.  Ajita Wilson and Cinzia Lodetti – both appeared in Edward G. Muller’s steamy jungle pic ESCAPE FROM HELL the same year – are also on hand as a couple of prostitutes in one of Perlante’s brothels, who not only provide the requisite nudity, but also suffer further abuse at the hands of rival gangsters.

Although efficiently handled by most of Fulci’s regular crew from the period including DP Sergio Salvati, editor Vincenzo Tomassi and composer Fabio Frizzi, the film seems oddly out of place when compared to other polizieschi and seems to have more in common with his many horror titles.  During a terrific and highly stylized scene at, what appears to be a giant quarry, Luca is forced to defend himself and inadvertently kills one of Sciarrino’s men (Nello Pazzafini) when he falls into a large bubbling lime pit.  The bleak gravel dunes and misty, steam-filled atmosphere seem more akin to a horror film, and then in another typical horror movie moment, his badly decomposed corpse is thrown through the bedroom window of Sciarrino’s house.  Salvati’s sharp photography is another added bonus, but at times an uncharacteristic haze permeates certain scenes - a technique also utilized by Fulci in many of his other films, most notoriously in CONQUEST (1982) – which also gives it a rather strange, almost otherworldly feel, which is especially evident during the finale at a desolate seaside locale.  Some of the slow-motion action scenes are also a nice touch – including many gory highlights - that takes the cinema styling of Sam Peckinpah to almost ridiculous levels.  While undoubtedly a talented film composer, Fabio Frizzi also worked on a number of polizieschi such as Luigi Petrini’s LAST HOUSE ON THE LEFT (1972) wannabe DAY OF VIOLENCE (1977), which featured plenty of bass-heavy rhythms and driving percussion.  His work here is not much different, and while it’s an interesting score, it also doesn’t have the same impact of the hard-hitting, and more familiar, brass sections of a classic Franco Micalizzi or Stelvio Cipriani Eurocrime score.

Already a regular in various polizieschi such as Franco Martinelli’s fast-paced ROME, THE OTHER FACE OF VIOLENCE (1975) and Domenico Paolella’s even faster-paced STUNT SQUAD (1977), French actor Marcel Bozzuffi usually played commissarios fighting on the “right side of the law”, but for Fulci’s outing, he returns to his tough, no-holds-barred ruthless roots as the French Connection.  Unlike his somewhat subdued but certainly vicious turn in Friedkin’s film, he really gets to chew the scenery here orchestrating a number of hits on the opposing factions of his heroin trade.  Outside of the main players, Fulci populates the rest of the film with many familiar faces including busy character actor Venantino Venantini (he would go on to drill a giant-sized hole through the skull of John Morghen in Fulci’s The GATES OF HELL the very same year) as a frustrated commissario; Fabrizio Jovine (he also appeared in The GATES OF HELL as the suicidal priest) has a minor role as a “Guardia di Finanza” inspector; blonde, lanky character actor Luciano Rossi also shows up as one of the Marsigliese’s drug chemists while Guido Alberti is an old school mob boss who, in a nice comedic touch, just sits around for most of the film watching spaghetti westerns and even polizieschi, that is, until he helps organize an all out war against the Marsigliese.  Italocrime old hands Tommaso Palladino, Salvatore Billa and stuntman/sometime actor Omero Capanna also appear.

Originally released in Italy as LUCA IL CONTRABBANDIERE, the film was first issued in the US on VHS by Mogul Video.  It has since been released on DVD by Blue Underground in a beautiful and, much improved, edition.  The most recent edition is from UK specialty label Shameless, which like the earlier Blue Underground DVD, is also uncut but Shameless’ edition includes both the English dub and the original Italian language version with optional English subs.  It also includes some alternate opening sequences and a limited edition lenticular cover.  Whichever edition you choose, it’s certainly worth checking out or adding to your, hopefully, expanding Eurocrime collection.