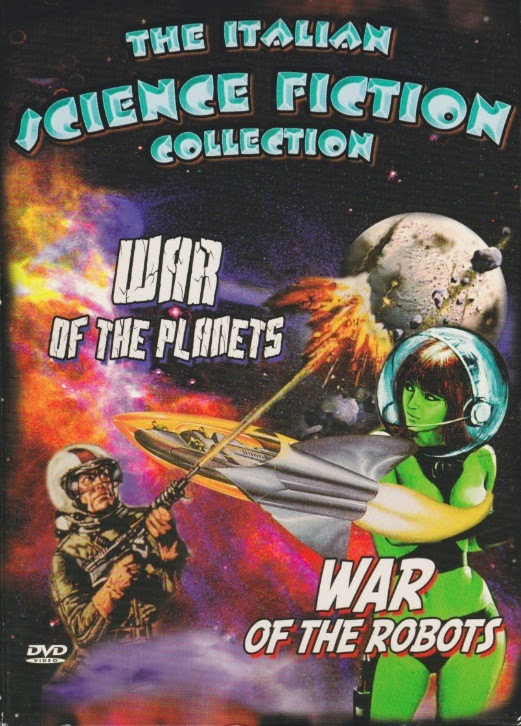 Even though science fiction was clearly not a strong point for most Italian filmmakers, it was inevitable that some would try and create their own “epic” space adventures following the monumental worldwide success of George Lucas’ STAR WARS (1977). Despite a couple of enjoyable rip-off’s such as Luigi Cozzi’s STARCRASH (1978) and Aldo Lado’s The HUMANOID (1979), it was Alfonso Brescia that took a real interest into galaxies far, far away even though his budgets were far, far from respectable.  Released in 2002 by Retromedia as “The Italian Science-Fiction Collection”, this 2-disc set contains both WAR OF THE PLANETS (1977) and The WAR OF THE ROBOTS (1978) in fairly sub-par, but watchable transfers, which have since been released by numerous budget-priced companies in all sorts of other sci-fi collections.  Unfortunately, this attractively packaged set is now out of print.

Along with Brescia’s The BATTLE OF THE STARS (1978), STAR ODYSSEY (1979 – also released on DVD by public domain specialists Alpha Video) and The BEAST IN SPACE (1980 – also available on DVD courtesy of Severin), it was quite astounding to witness just how similar and interchangeable these trashy no-budget films are in terms of casts, cruddy special effects and similar plots.  While this aspect of low-budget filmmaking is nothing new, these five films remain a truly exasperating endeavour even for scholars of European exploitation.  To this day, I still get them mixed-up.  So, on that note, let’s take a look at WAR OF THE PLANETS, the first film in this set.

Beginning on a rather dubious note, our intrepid space crew headed by Captain Fred Hamilton (John Richardson) is navigating through an asteroid field but, just as they are about to collide with an oncoming rock, it mysteriously disappears.  Apparently this was a “refraction of a cosmic explosion that occurred 10 million years ago”.  Uh, ok.  The credits begin and veteran composer Marcello Giombini’s odd tonal effects – obviously copied from Fred McLeod’s Wilcox’s FORBIDDEN PLANET (1956) – slowly emanate on the soundtrack as the screen is filled with all sorts of floating asteroids, satellites, stock footage of rocket launches and pseudonymous credits.


Back on Earth, Captain Hamilton is about to be disciplined for insubordination on the grounds of his rebellious behavior, mostly because he refuses to take orders from his superior officers who “take notes from an electronic hunk of metal”, a super-computer known as The Wiz.  As expected, this opens the never-ending argument about the benefits of technology, the main theme of this hilariously shoddy production.  On account of his defiance, he is to command the MK31, a spaceship that is leaving for the “Vega Sector” to repair a satellite or something, which he and his crew perform dutifully.  On their way back, some strange laser signals accompanied by jarring sound effects are picked up by the ship’s computer and, with a rather flippant tone, Captain Hamilton simply states that the “computer is drunk” or that “these strange signals could be radioactivity meeting a cosmic belt”.  It sounds like Captain Hamilton may have had a few too many, but the Wiz knows better and verifies that there is an alien intelligence behind the signals, which they are forced to investigate.  Unbelievably, it takes almost 30 minutes to establish this rather minor set-up.

Despite finally moving forward, the film continues to float aimlessly like an asteroid through space.  Captain Hamilton’s crew merely sits around and randomly push buttons on a variety of consoles and keyboards.  For no apparent reason, the amateurish but highly entertaining sound mix also has some sort of bizarre mechanical whir on a never-ending loop, which actually becomes oddly hypnotic.  Taking time to rest from staring at flickering screens and flashing lights, two members of the crew (West Buchanan and Malisa Longo) engage in some “cosmic love”.  This involves sleeping in separate beds while a glowing sphere in the middle of the room projects all the requisite sensations to the participants as they moan with obvious satisfaction.  Of course, this leads to the inevitable discussion of technology as Captain Hamilton and Mila (Yanti Somer) engage in some old school lovin’ in another compartment.  Brescia and his editors (Carlo Reali and Larry Marinelli) briefly crosscut between the two scenes while Hamilton offers his best advice to Mila, “You must never be fooled by imitations.”

Interrupting Hamilton’s dime-store philosophy, an uncontrollable gravitational pull takes the MK31 to an unknown planet – the one with the alien signals – that appears to have favourable conditions to sustain life.  As they exit their ship, revealing grainy stock footage of barren landscapes, they discover a large monolithic gate that acts as a portal to other dimensions as a large, clunky robot with glowing red eyes and a giant raygun roams the rocky landscapes.  They also come across a group of telepathic beings coated in silver body paint and pointy ears. Led by Etor (Aldo Canti), they all seem to communicate telepathically, but through Hamilton’s brilliant deductions, their “brainwaves make the telepathy become sound”.  According to Etor, their once prosperous planet was taken over by an even bigger robot with a big ominous voice when it helped defend their planet against hostile aliens.  Of course, it’s now up to Captain Hamilton to help them defeat this giant robot, which to be honest, looks like a 4-year old  created it.

After a brief but much-needed rest, it was time to move onto the next feature in this set, the much-maligned WAR OF THE ROBOTS or, as it was to known to collectors of big box VHS tapes, REACTOR.

On a futuristic-looking Earth, Captain John Boyd (Antonio Sabato) and Lois (“Melissa Lang” – that’s Malisa Longo once again) are in love, but Lois is kept busy working in Professor Karr’s (Jacques Herlin) laboratory because he’s on “the verge of discovering a great secret that could lead to immense power.”  As soon as John leaves in his fancy black sports car, a group of robots – in shiny gold suits and blonde bob wigs – abduct Lois and Professor Karr and take them to their distant planet Anthor.

Following the orders of Commander King (an uncredited Roger Browne), Captain Boyd and his crew are sent to the depths of Brescia’s cut-rate galaxy in search of our hapless duo.  To up the suspense even further, Professor Karr’s experiments have apparently damaged the atomic reactor so they need to find him in just over eight days before it explodes and destroys the city.  Captain Boyd assembles his crew which includes Julie (Yanti Somer) who is in love with Boyd; Roger (“James R. Stuart” / Giacomo Rossi-Stuart) who wants to bed Julie; the ship’s doctor Paul (“Vernon Vernons” / Venantino Venantini); a Texan named Herb (another uncredited appearance from West Buchanan) who enjoys wearing his cowboy boots when he’s put in charge of the ship; and Sonia (“Mickey Pilgrim” / Ines Pellegrini), who just happens to have a similar blonde bob wig as those silly robots.  Along the way, Boyd gets to float through space in order to “contact the computer memory bank” on a remote satellite in order to retrieve the coordinates of the alien spaceship and, we the viewers, get to see Captain Boyd floating against the phoniest star-filled background you’ll ever see.

Landing on a heretofore-unknown planet for reasons unknown other than it being a “sensational spot for a weekend”, Captain Boyd instructs his crew to get the “anti-radiation suits”.  Our reconnaissance crew is next seen wearing skin-tight suits with no helmets, so it means they must have some invisible shield to protect their noggins from the apparently harmful radiation.  Brescia’s regular DP Silvio Fraschetti (hiding behind the pseudonym of Cyril Franks) utilises lots of day for night photography and coloured gels to get the desired gloomy effect of an inhospitable planet, which admittedly, are quite effective; sort of a very, very poor man’s Mario Bava.  After poking around some deserted caverns - which look suspiciously like the ones at the end of Brescia’s terrific polizieschi NAPOLI… LA CAMORRA SFIDÁ, LA CITTÁ RISPONDE (1979) – they are attacked by a bunch of blind guys in dusty cloths and medieval-looking helmets.  When their leader Kuva (“Nick Jordan” – that’s Aldo Canti once again) orders them to be killed, the robots show up and Captain Boyd and Kuva team-up to destroy them.  Eventually reaching Anthor, Captain Boyd soon discovers a terrible secret involving Lois and then he and his crew try and make their way back to Earth to prevent the “uncontrolled reaction” of the atomic reactor.

Despite all the goings-on, these juvenile exercises in sci-fi hokum are woefully lacking in any excitement whatsoever but are somewhat saved by a surprising amount of ineptitude on display.  The bulk of the films are taken up by seemingly endless scenes of spaceships whizzin’ through space, which would easily cure even the most severe cases of insomnia.  If that wasn’t enough, most of the familiar Euro cast sits in front of a variety of consoles and flashing panels – the same cheap sets used over and over and over again - that look like slightly re-modeled sets from Byron Mabe’s threadbare SPACE THING (1968).  Even though both Antonio Sabato and John Richardson have appeared in numerous stinkers in their long and varied careers, these are way below standard even for them.  Sabato in particular has always been a fairly intense and physical actor that got to flex his acting chops in a number of polizieschi, but even he seems to be going through the motions after realizing the ridiculousness of it all.  The undisputed “stars” of these films are the English dubbing teams led by the prolific Ted Rusoff and his wife Carolyn De Fonseca (he voiced Giacomo Rossi-Stuart while she did the chores for Malisa Longo) that provide all the hilarious dialogue.  They must have had a ball in the recording sala.

While very humble indeed (I’m trying to be generous), this pair of sci-fi clunkers is definitely entertaining for anyone with an interest in bottom-of-the-barrel Euro flicks.  It really does boggle the mind that signor Brescia actually churned out 5 of these turkeys, but at least he managed to put together The BEAST IN SPACE for all to enjoy, which in my opinion is an unparalleled Z-grade trash masterpiece. 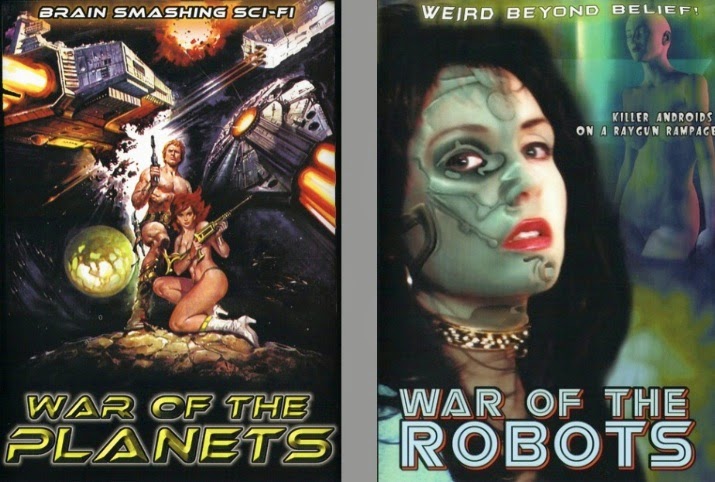