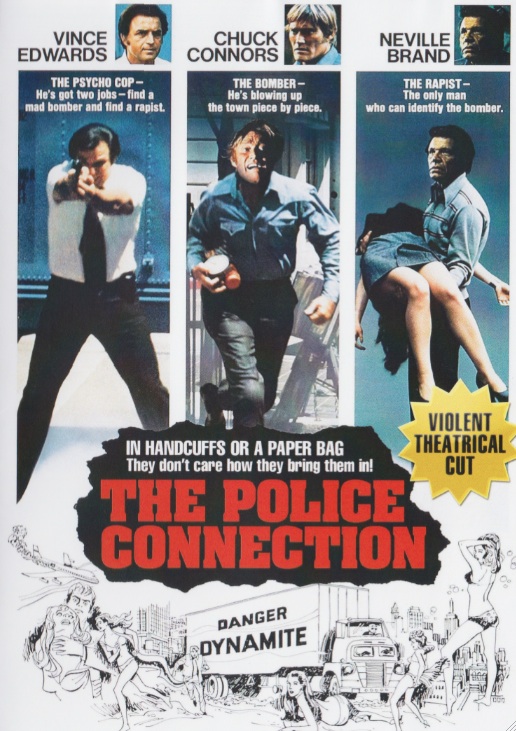 Just caught up with Bert I. Gordon’s The POLICE CONNECTION (1973), a terrific no-nonsense cop thriller that benefits greatly from the fine talents of Chuck Connors, Vince Edwards and Neville Brand in the lead roles.

Connors stars as William Dorn, a rather unhinged individual that has been terrorizing the Los Angeles area with a series of mysterious bombings and it’s up to Vince Edwards as Lieutenant Minneli to try and stop him.  Unfortunately for Minelli, the only person that can identify him is George Fromley, a serial rapist and killer who is played to the hilt by Neville Brand.

It’s nice to see these all these old pros working together in roles they can have plenty of fun with.  Edwards and Brand play well off each other in the few scenes they have together and Brand definitely gets to chew the scenery in a couple of memorable moments that include some homemade stag films.  However, it’s safe to say that Connors will always get most of the accolades for his unusual performance as the obsessive villain that will stop at nothing to achieve his goal.  He doesn’t say a whole lot throughout the film but he still commands the screen whenever he’s on it.

Even in the more permissive ‘70s, The POLICE CONNECTION turned out to be quite a departure for Mr. Gordon, a jack-of-all-trades director whose career was prominently associated with more family friendly sci-fi and horror that included AIP gems such as The AMAZING COLOSSAL MAN (1957), WAR OF THE COLOSSAL BEAST (1958) and FOOD OF THE GODS (1976).  He definitely wasn’t afraid to wallow through the muck and throws about as much sleaze and violence on the screen, which must have pushed the limits of that R rating.  In spite of all the nudity and violence prevalent in the film (nicely restored by Mr. Bill Olsen at Code Red), it still has that flat TV-movie vibe to it; kind of a sleazier, cheesier episode of Joseph Wambaugh’s POLICE STORY which, coincidentally also starred Chuck Connors and Vince Edwards in a couple of episodes.  Even TV regulars like Roy Applegate turn up in this; he has a brief but memorable run-in with Connors at a street intersection.

Previously available as The MAD BOMBER on a variety of budget labels on both VHS and DVD, Code Red has thankfully revived this exploitation classic in its original uncut theatrical version in a brand new 16x9 transfer.  The difference is quite a step-up in terms of picture quality and the hefty dose of nudity and violence is reason enough to pick this up.

So what are you waiting for?  Support Code Red and order yours today on their Big Cartel Site.  When visiting, check out all their newest stuff as well including Eric Weston’s EVILSPEAK (1981) in a brand-spanking new transfer and John Henry Johnson’s CURSE OF THE BLUE LIGHTS (1988), a nearly forgotten late-‘80s horror film.
Posted by Dennis Capicik at Tuesday, August 27, 2013