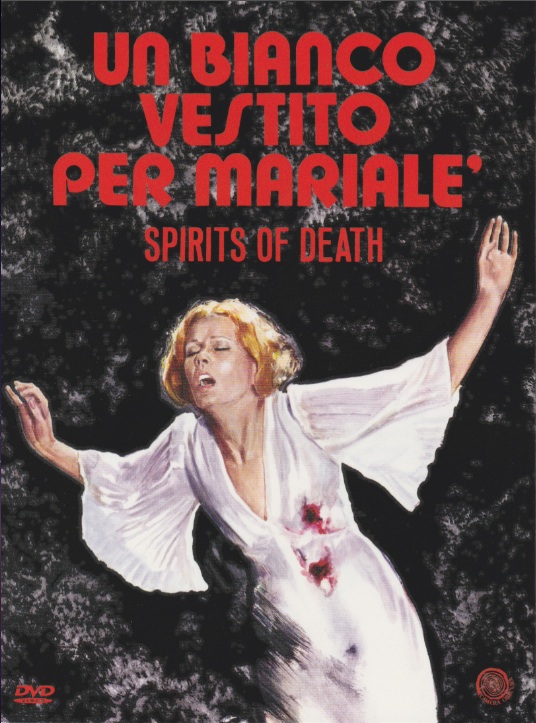 To begin with, I absolutely adore Camera Obscura DVDs.  Their transfers, packaging and extras are always top notch and SPIRITS OF DEATH (1972), their latest release, is no exception.

Originally released in Italy as Un Bianco Vestito per Marialé (A White Dress for Marialé), dependable giallo regulars Evelyn Stewart, Luigi Pistilli and Ivan Rassimov headline a colourful cast in this beautifully mounted production from director Romano Scavolini, who is better known as the controversial director of NIGHTMARE (aka Nightmares In A Damaged Brain), his notorious American-set slasher from 1980.

In the opening, Mariale witnesses the murder of both her mother (Evelyn Stewart wearing the title white dress) and lover (Gianni Dei) by her father, who then commits suicide.  Years later, Marialé (Stewart once again) and her husband Paolo (Luigi Pistilli) are living in a large secluded castle away from prying eyes.  Unbeknownst to Paolo and his rather unbalanced servant (Gengher Gatti), Marialé sneakily invites a group of old friends (including Ivan Rassimov) for a night of drinking and a rather bizarre, hedonistic masquerade dinner.  Naturally, it gets out of hand and gory murders ensue.

Part gothic horror, part Italian thriller, this is a strange mixture that isn’t all that successful simply because the mystery element is well telegraphed in advance while most of the film’s psycho-analytical gobbledygook gets rather tiresome. However, it’s still enormously engaging with a dark, foreboding atmosphere that is well maintained throughout thanks to an enthusiastic cast and Scavolini’s technical professionalism; his scope photography is especially impressive with lots of odd camera angles, deep focus shots and changing lenses that keep things visually exciting.  To top it all off, it’s all beautifully complemented by Fiorenzo Carpi and Bruno Nicolai’s magnificent score, which greatly adds to the film.  Without a doubt, it’s a case of style over substance but, let’s be honest, most giallo thrillers are.

Rather difficult to track down over the years in a decent version, Camera Obscura has once again delivered another great DVD that looks remarkable.  It’s a massive improvement from the Italian CVR or French Canadian Starvision VHS tapes, which always came across grainy or washed-out.  The film is presented in German or Italian with optional German or English subtitles while the plentiful extras also contain English subtitles.  These include an on-camera interview with director Scavolini as well as an interesting commentary track from film archivists and journalists Christian Kessler and Marcus Stiglegger.

Although a little expensive, it’s well worth your hard-earned dollars.  Order it at DiabolikDVD. Also keep your eyes peeled for more Camera Obscura goodies on the horizon, which include Ottavio Alessi’s TOP SENSATION (aka The Seducers) with Edwige Fenech and Rosalba Neri and Andrea Bianchi’s amazing GUNS OF THE BIG SHOTS (aka Cry of a Prostitute).
Posted by Dennis Capicik at Tuesday, August 20, 2013